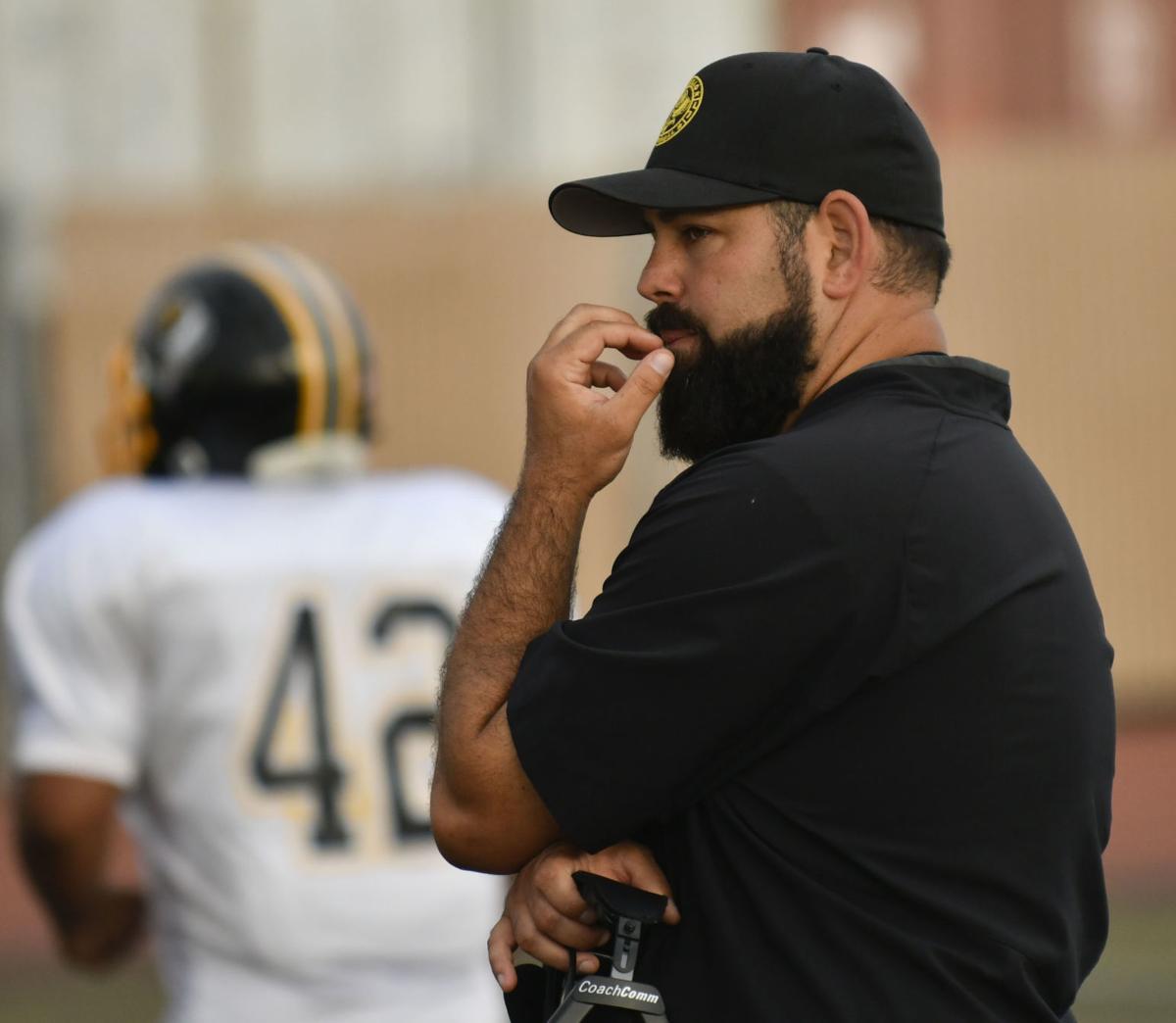 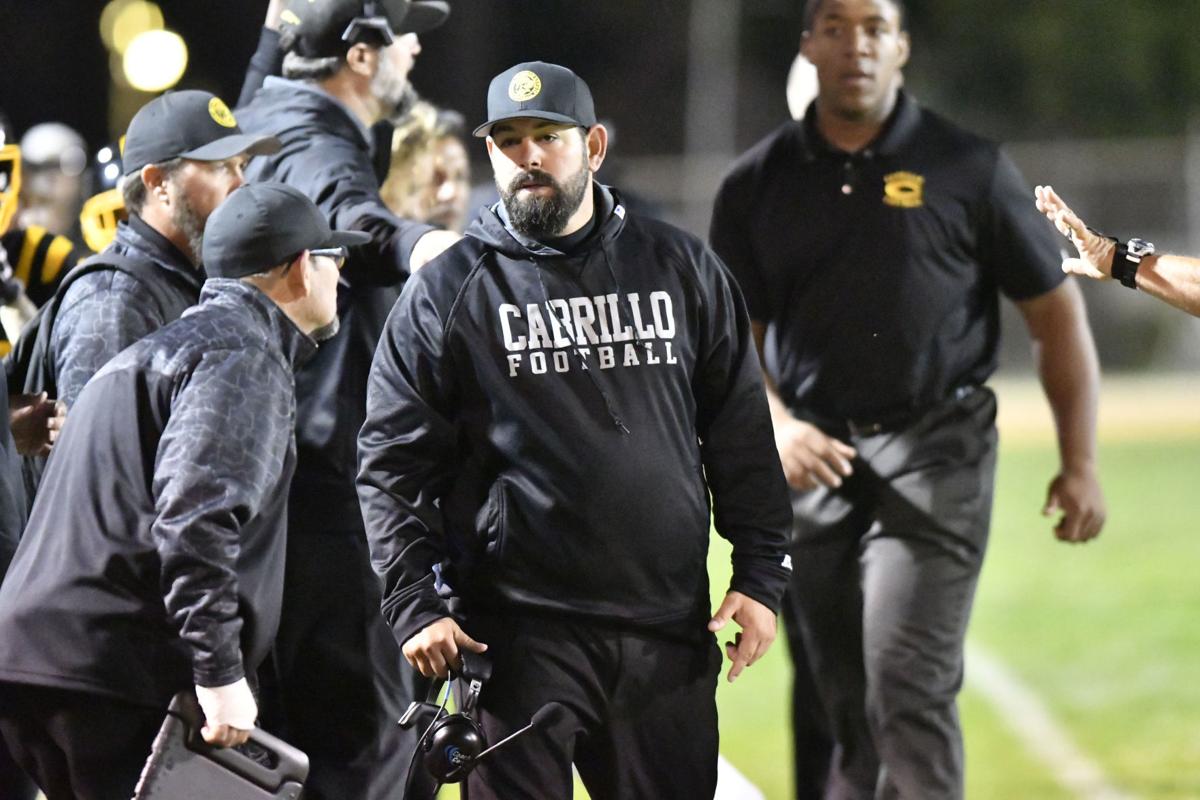 Cabrillo coach AJ Patera gets his first and last win with Cabrillo on Sept. 29, 2017 as Cabrillo defeated Morro Bay 47-42. Cabrillo was dismissed from the varsity head coach position after the 2019 season. 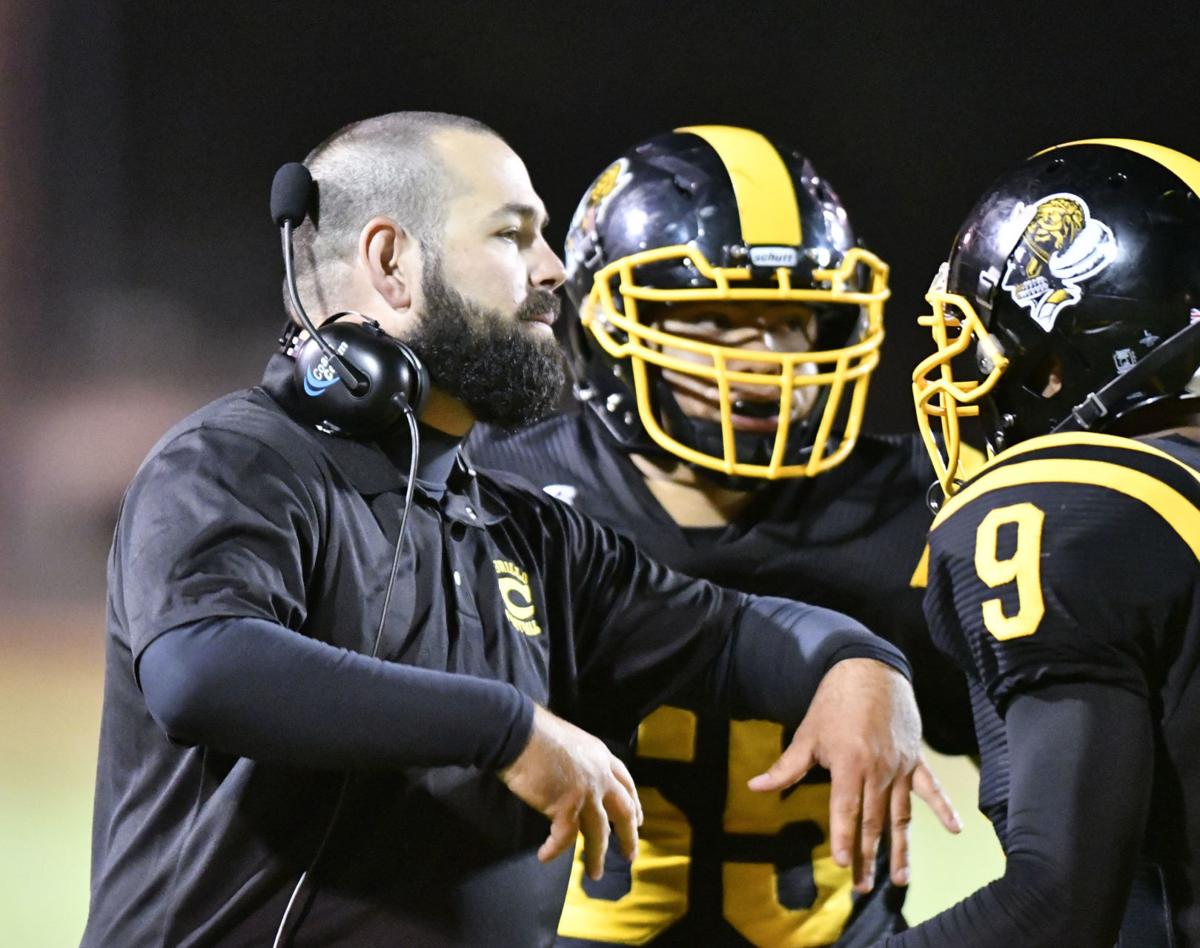 Cabrillo coach A.J. Pateras is seen during a game against Bakersfield Frontier during the 2017 season, his first at CHS.

Lee Central Coast News has learned that Pateras was relieved of his duties last week in a meeting with the Cabrillo High administration.

Pateras lasted three seasons with Cabrillo, winning one game in that span. Cabrillo's next head coach will take over a program that is riding a 24-game losing streak that dates back to 2017.

Though wins on the field never materialized for Pateras in Vandenberg Village, the Ventura native leaves the his post proud of the way he led the program. Patareas notes the structure he built into the program, things like a fully funded non-profit booster club, new equipment and updated facilities.

"I am so proud of the kids and the development and growth they have shown," Pateras said. "For the seniors, it’s been an honor leading them through a similar change three years ago and I think we all know that anything can be thrown at us and we will be OK."

Pateras came to Cabrillo in 2017 after Don Willis stepped down from the head coaching position after a DUI arrest in the middle of the 2016 season. JJ Willis finished out 2016 as head coach and Pateras was hired as the full-time coach in early 2017.

After Cabrillo finished 4-6 in 2016, the Conquistadores went 1-9 in Pateras' first season then 0-10 the following two years.

"I truly am happy that I had the honor of being the head coach of the Conqs, and will always cherish and hold in high regard the relationships that were built these last three years," Pateras said. "To my players and coaches, thank you."

Pateras will continue to teach full-time at the school. Pateras is a Social Science teacher and even relinquished some of his teaching opportunities this school year so Cabrillo could hire another on-campus football coach.

“Whatever happens with the program going forward, I just hope it’s a kid-and-family-centered focus," Pateras said. "I hope the program continues to be focused on developing and building kids into men. The program hopefully will continue to work with parents and build on the successes we had. I believe whoever they hire should be invested on our campus and active on campus.

"...I’d love to see some success on the field for these kids. There's a good group of freshmen and sophomores coming up and a phenomenal junior class. They can build upon what we started and take it to a better level."

The Lompoc Unified School District posted the varsity head football coaching opening on its human resources website Tuesday night. The application deadline is set for Dec. 13. The position includes a two-step stipend that totals around $7,600.

Lompoc soccer: Braves primed for another run at the Channel League title

Football: Cabrillo High has found its next head coach

Cabrillo High athletic director Gary West said the school has an agreement in place for its next head football coach in Andy Guyader, who has coached at Cal Poly and Army as part of Rich Ellerson's staffs.

College of the Sequoias had 22 points off turnovers to Hancock’s six. The Giants have a six-footer, Aubrey Nunes, who has game. The tallest Bu…

The Visalia Redwood football team’s yardage output on offense this year has been good, not spectacular. The Rangers’ POINTS output has been pretty spectacular.

Cabrillo coach AJ Patera gets his first and last win with Cabrillo on Sept. 29, 2017 as Cabrillo defeated Morro Bay 47-42. Cabrillo was dismissed from the varsity head coach position after the 2019 season.

Cabrillo coach A.J. Pateras is seen during a game against Bakersfield Frontier during the 2017 season, his first at CHS.