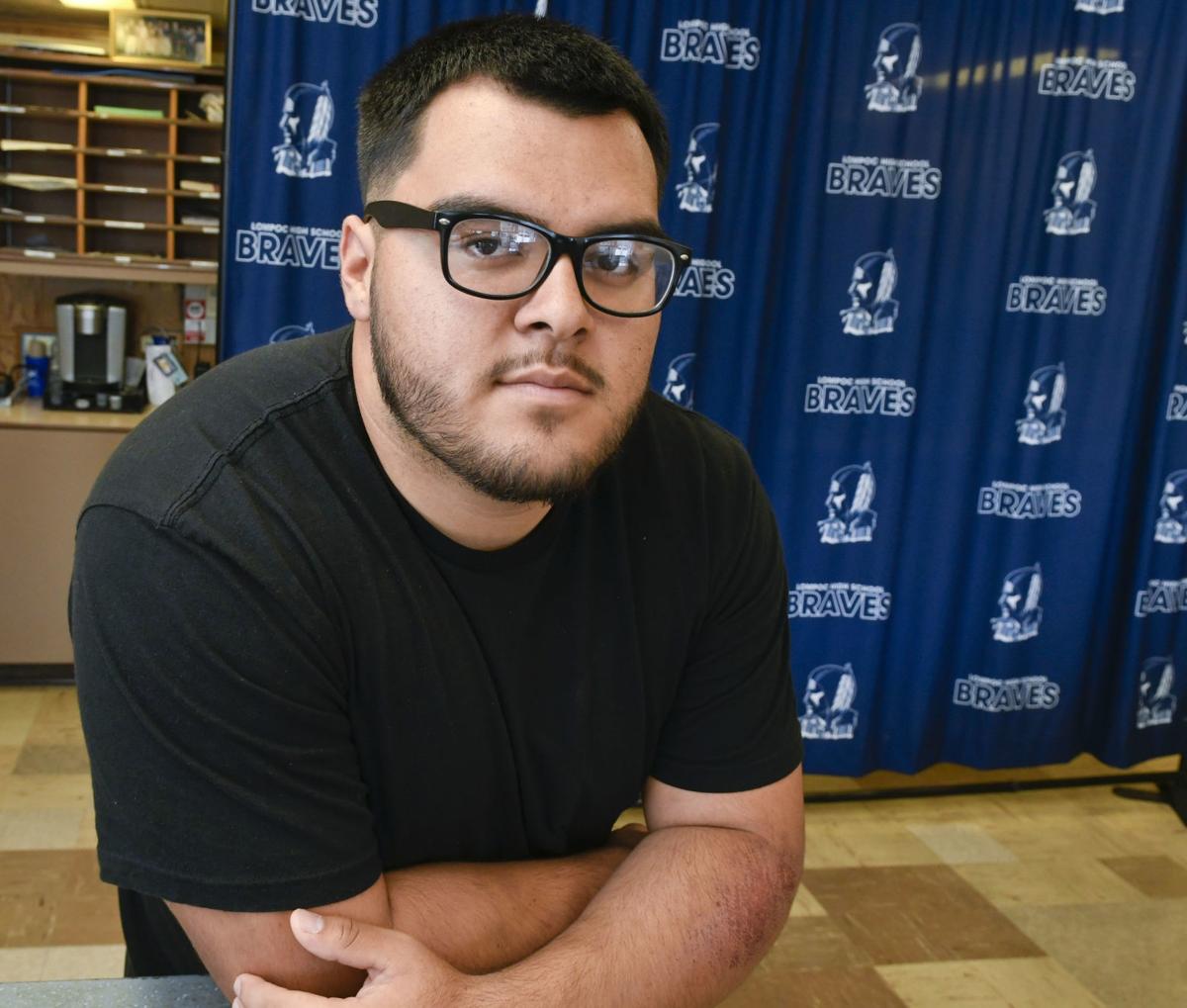 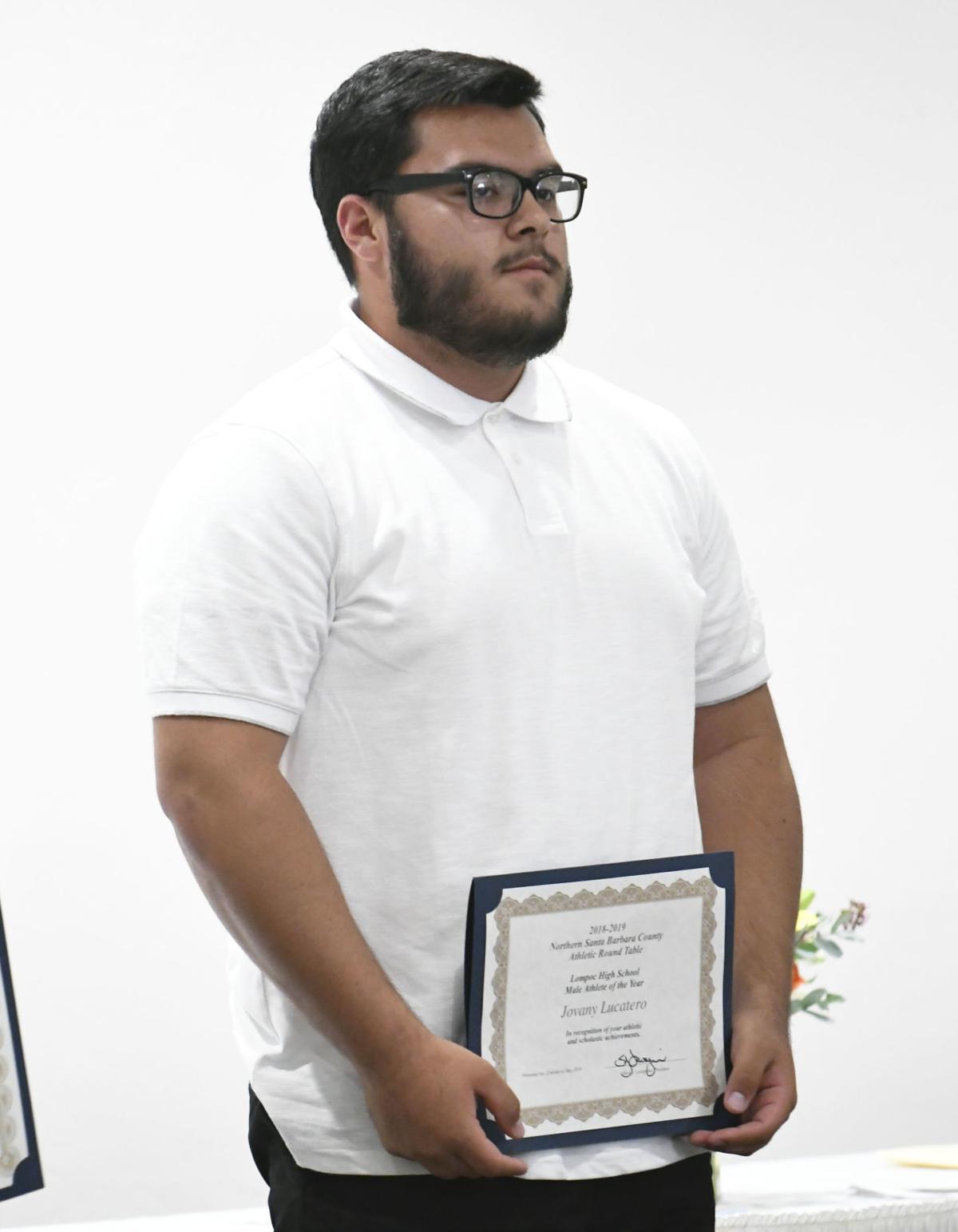 Jovany Lucatero is name Lompoc High School's male athlete of the year at the Northern Santa Barbara County Athletic Round Table awards, at the Elks Club in Santa Maria on Wednesday night.

A mosquito bite once prevented Jovany Lucatero from competing in sports for a lengthy time.

But it was unlike any needle pinch on the skin from the insect. Lucatero, at age 8, started witnessing skin flare ups, shakiness and loss of balance — three symptoms of viral meningitis.

“I was at a school picnic and a mosquito came and bit me. It was kind of tough,” Lucatero recalls. “I also had really bad, throbbing headaches. I was in the hospital for a couple of days too.”

The disease limited physical activities for Lucatero until the end of his eighth grade year.

And once he arrived at Lompoc High for freshman orientation, he let it be known: He was going to compete in sports — and refuse to allow this virus to consume him.

The end result: Channel League titles in both football and track and field for Lucatero, plus a collection of All-League and All-CIF accolades in shoulder pads and with the shot put and discus.

Lucatero left LHS on Thursday as a member of the 2019 graduating class — a class that witnessed its first Channel League titles in the sports Lucatero competed in. He walked across the stage to accept his diploma at Huyck Stadium and now, he’s off to the real world.

While Lucatero couldn’t compete in competitive sports before high school due to viral meningitis, he spent his Friday nights in the fall watching his older brother and past Lompoc High football players underneath the Huyck lights.

He knew inside, he wanted to eventually put on the Braves’ football attire.

Future Cabrillo educator? Multi-sport athlete Jackson Anderson has a vision for returning to CHS after college

And Lucatero went on to help anchor one of the more dominant offensive line units in the Channel League alongside the likes of Juan DeLuna, Gerardo Hernandez and Jacob Nunez. Under the tutelage of offensive line coach and University of Utah grad Matt Sims, the Braves continued to pummel defensive linemen into the grass to clear space for LHS’s vaunted running attack.

He looks back at his LHS gridiron time with fond memories.

“We wanted to carry the same energy they (past Braves) had,” Lucatero said. “I liked how they played and seeing the pre-game hype just made me want to do the same thing and carry that emotion.”

He picked up the shot put and discus and went on to become an All-League standout and CIF Southern Section Masters qualifier.

And his name will be in the LHS history books as a member of the Braves’ first-ever boys track and field champions, which he said wasn’t an easy task.

“It was more competitive. Nothing was handed to us, especially against San Marcos and Dos Pueblos,” Lucatero said.

His sports career got a late start. But now, Lucatero says it will come to an end once he arrives to Hancock College this fall.

“I want to try to get into the fire academy as soon as possible,” Lucatero said.

What’s his primary reason for putting out future flames?

“I want to be able to help people and give back to my community — something I’ve always wanted to do,” Lucatero said.

As for viral meningitis, Lucatero says there’s been no sign of it now — saying he still gets treatment but there are no more flare up outbreaks.

And he leaves LHS satisfied with what he accomplished in sports.

“I’m happy with what I did here,” Lucatero said.

McCoy's career statistics at Santa Ynez are hard to fathom. He threw for over 2,500 yards and 23 touchdowns as a quarterback. He also accumulated over 1,000 career rushing yards with 13 career touchdowns. (He has three touchdown runs over 95 yards). McCoy also amassed more than 500 receiving yards and five touchdown catches.

Jovany Lucatero is name Lompoc High School's male athlete of the year at the Northern Santa Barbara County Athletic Round Table awards, at the Elks Club in Santa Maria on Wednesday night.