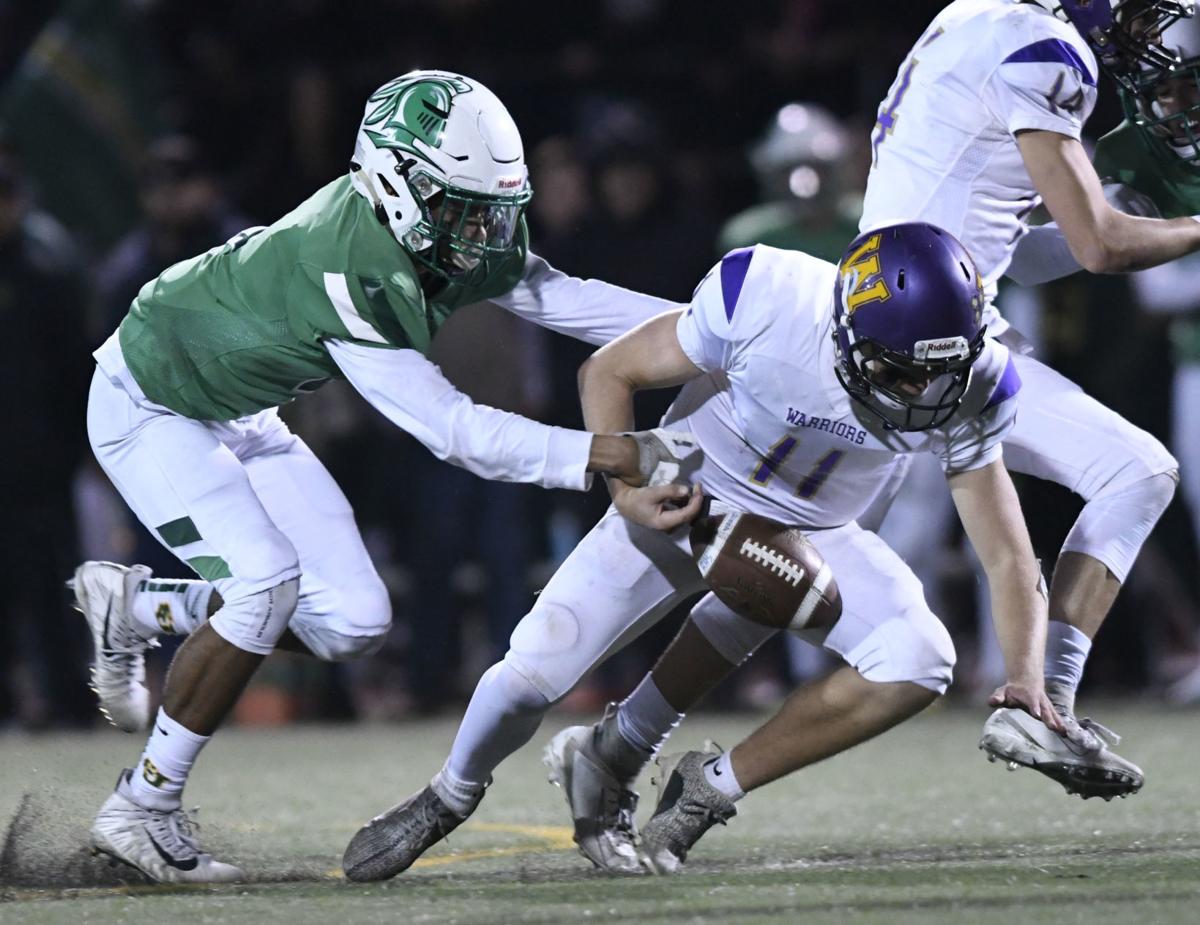 St. Joseph's Tyler Williams strips the ball from Righetti's Logan Mortensen, forcing a turnover during the 2019 edition of the Battle for the Shield game. 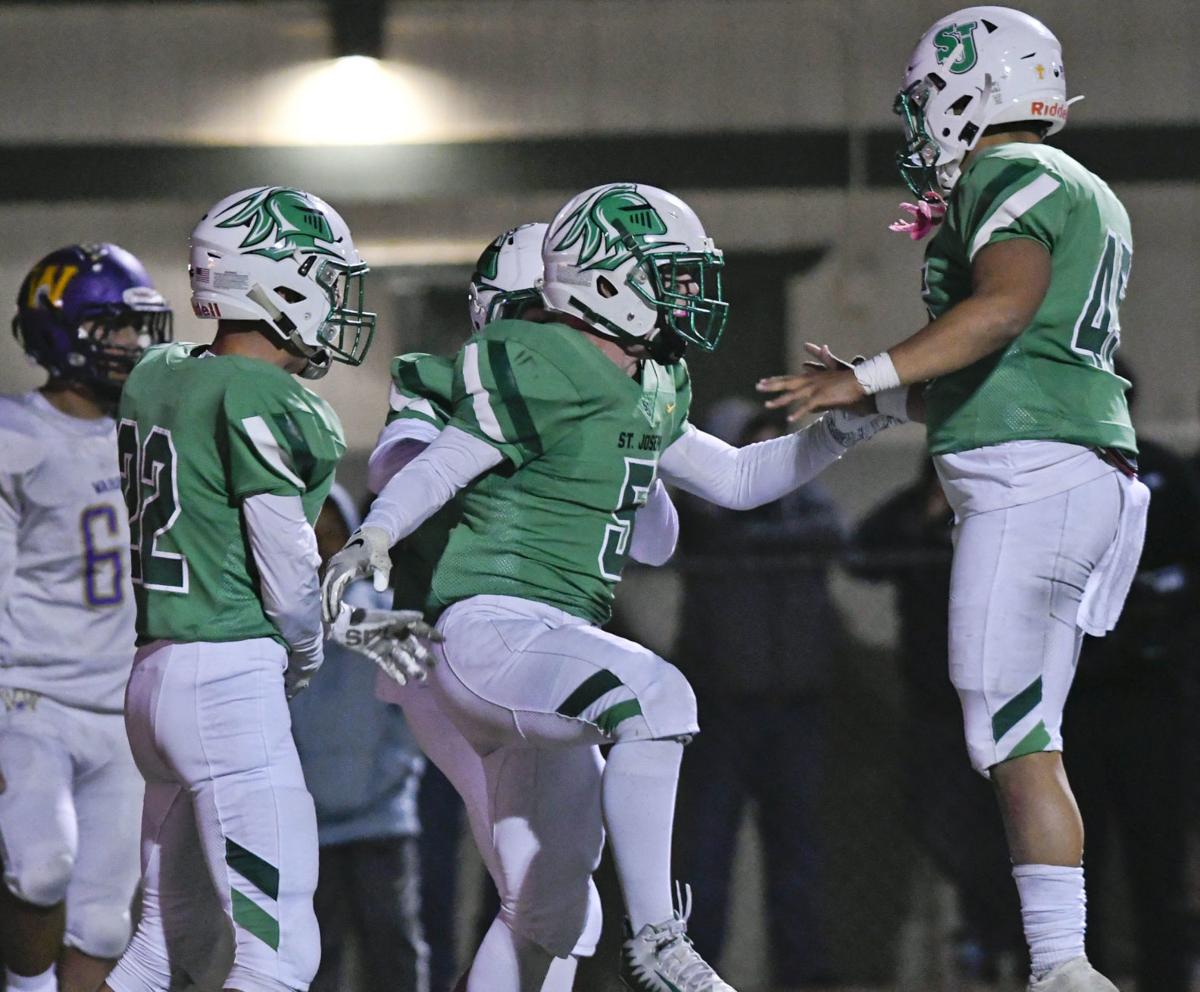 St. Joseph's Noah Skarda (5) celebrates after scoring on a two-point conversion in the game against Righetti on Nov. 1, 2019. 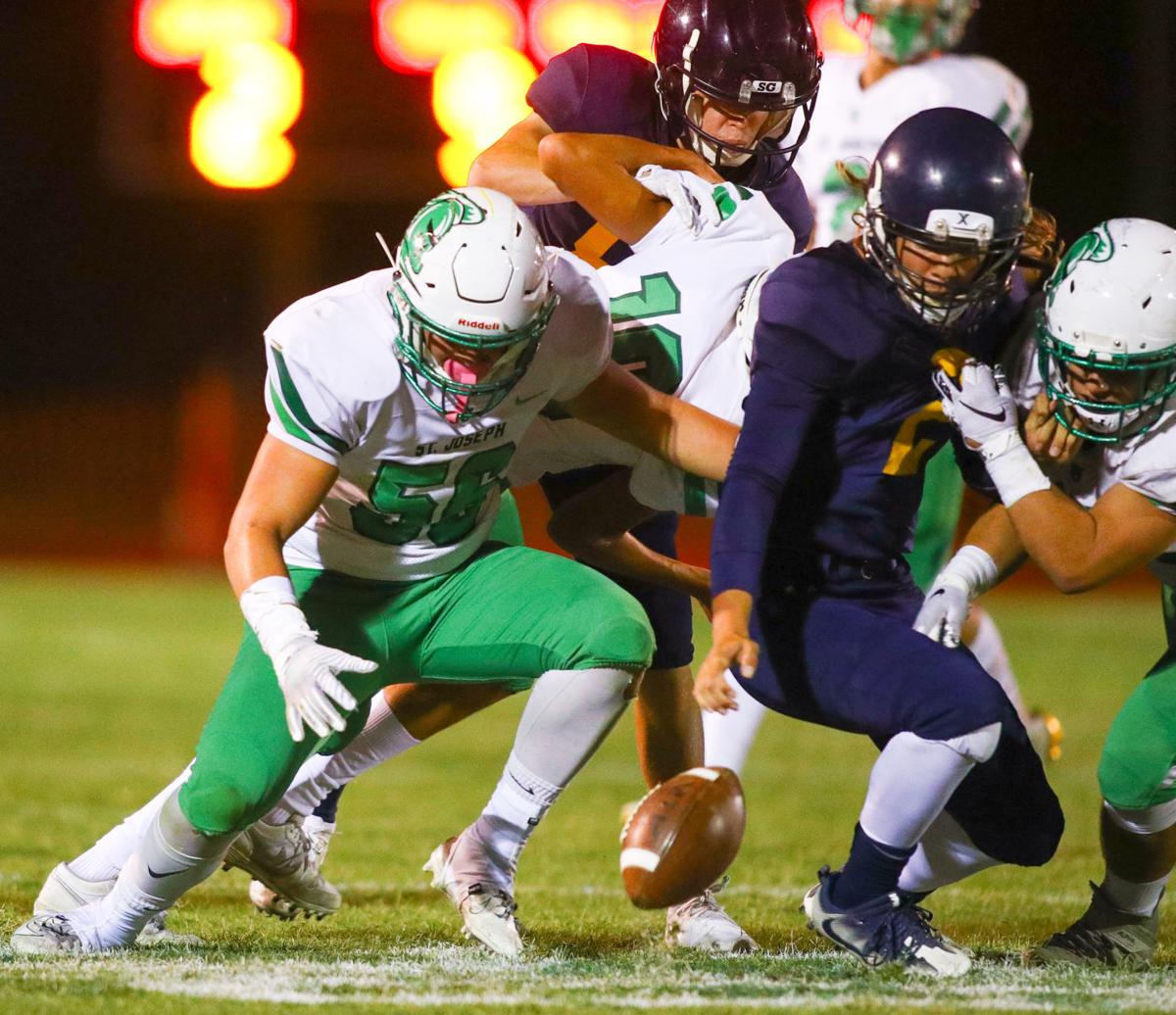 Jayce Gamble forces a fumble during a Mountain League game in Arroyo Grande on Oct. 25, 2019. Gamble and the Knights are hoping things are back to normal for the planned football season in the spring.

The early signing period has come and gone and with it a number of area football standouts signed with four-year schools.

Still, there are a handful of area standouts that could still land with a college program before everything is said and done.

The signing period will reopen in February. Before that, we'll do a school-by-school breakdown, highlighting some kids who do have college offers and others who don't, but may end up with a few. Today, we start with St. Joseph.

The Knights possess the crown jewel of remaining players who have to sign with a program.

Williams, who played his sophomore season at Cabrillo before joining the Knights and putting together a stellar junior campaign, holds 11 offers. The most recent school to show interest in the rangy defender is UTEP, a Conference USA program. It's been said that Williams has been impressed with what the Miners have to offer.

Ohio is another FBS program that has shown interest in Williams, who's rated as a three-star recruit by 247 Sports, and extended an offer, though the Bobcats have a pretty full class with three defensive backs already signed. Army is also in on the talented corner.

Williams, also a track and field standout at St. Joseph, is unquestionably talented. But he put together a stellar junior season in 2019 that showed he's also a legitimate football player. Williams showed flashes of lockdown corner potential and also displayed some physicality with his improved tackling skills. What's more, Williams was a spark plug on special teams, blocking kicks and make plays in all phases of the game. He was also counted on as a play-maker on offense as a deep-threat wide receiver.

Skarda isn't a burner, but he's a solid slot receiver who has a knack for getting open. Skarda made some big catches in big sports for the Knights in 2019, working well with quarterback Hunter Barnhart. Skarda was especially good in the Mountain League win at Arroyo Grande.

The receiver announced that the University of La Verne offered him last month. His first offer came from Alleghany College in Meadville, Pennsylvania. La Verne and Alleghany are both Division III programs.

Gamble is a prototypical inside linebacker and a type of player that St. Joseph has consistently produced starting with Fenton Will several years ago.

Gamble doesn't have any offers as of now, but that certainly would've changed with a big senior season. He's one of those guys that really has been hurt by not having another season to put on film, though hopefully he'll get that chance sometime this spring.

Stineman has the physical tools to be a college offensive lineman with his size and strength. He's still got some time to develop in terms of technique, skill and quickness.

Everyone, including sports writers, uses the old adage: You can't teach size. And, man, does Stineman fit that bill. A bonus is that Stineman is interested in multiple sports, having played some baseball last spring and some track and field. Playing multiple sports deep into high school careers can often prove beneficial for most athletes and one the size of Stineman should certainly benefit.

Don't be surprised to see Stineman catch on at some four-year level quickly once his time is up at St. Joseph.

Also: Makai Sat and Mark Crisp won't be seniors this school year, but they're both worthy of keeping an eye on. Sat was up on varsity as a freshman and definitely proved he could hang at that level. Crisp was quite impressive before going down with an early-season injury. He's back to full strength and could be the area's top QB before his career is done at SJHS.

Check back for updates on other Central Coast schools. Did you get an offer? Are you looking for a college destination? Email the author or send a message to JBaileySMSports on Twitter so we can publish the information.

On Tuesday, the CIF state office sent a stark warning for other programs with plans on going rogue and playing outside the state's health guidance.

Who's up next? One of area's top players may have suited up for the last time

St. Joseph's Tyler Williams strips the ball from Righetti's Logan Mortensen, forcing a turnover during the 2019 edition of the Battle for the Shield game.

St. Joseph's Noah Skarda (5) celebrates after scoring on a two-point conversion in the game against Righetti on Nov. 1, 2019.

Jayce Gamble forces a fumble during a Mountain League game in Arroyo Grande on Oct. 25, 2019. Gamble and the Knights are hoping things are back to normal for the planned football season in the spring.