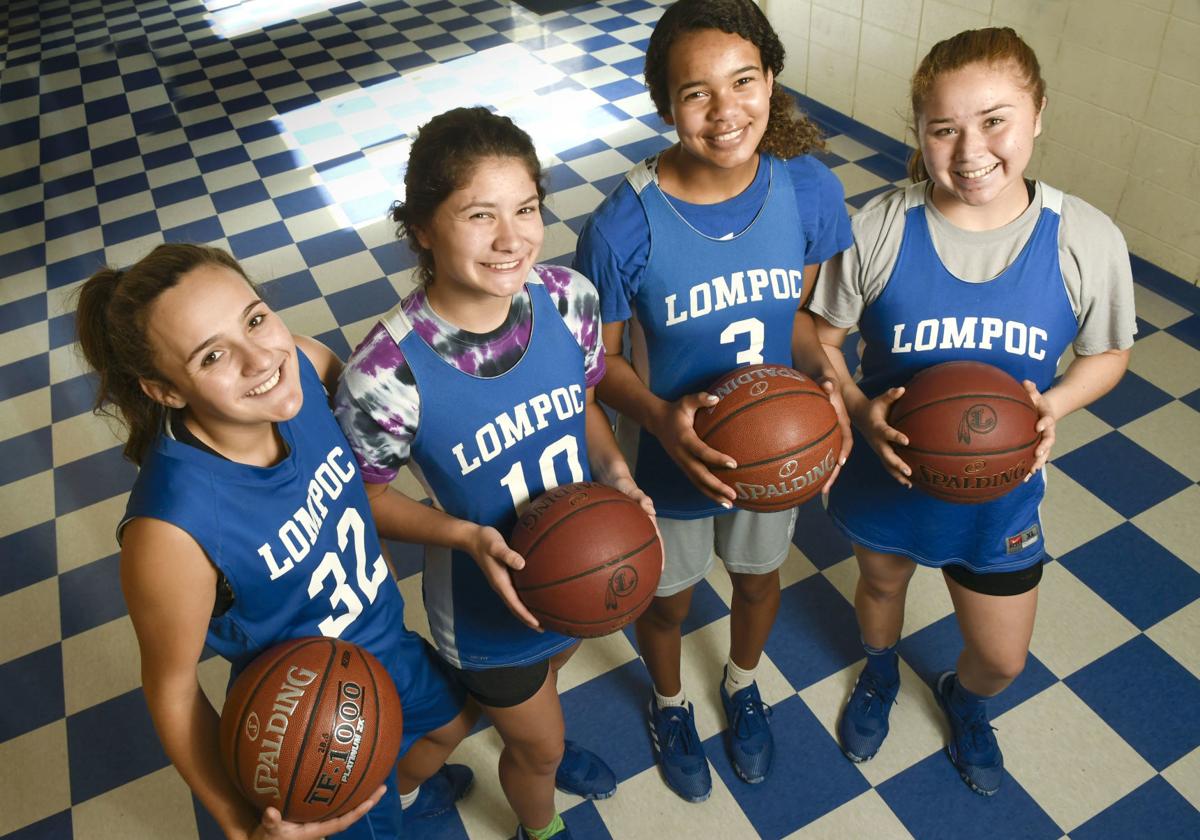 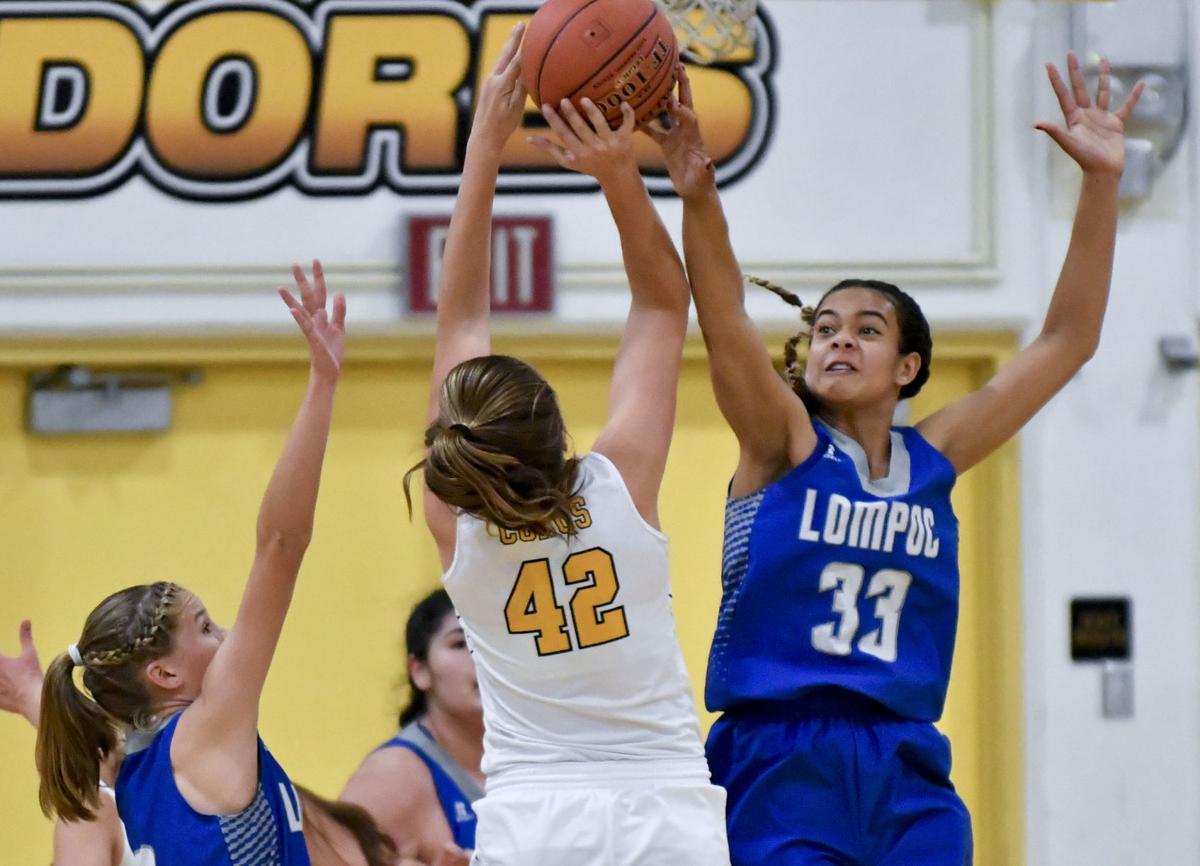 Lompoc's Kayla Taylor blocks a shot by Cabrillo's Morgan McIntyre during a game last January. Taylor is back and set to lead the Braves into 2020. 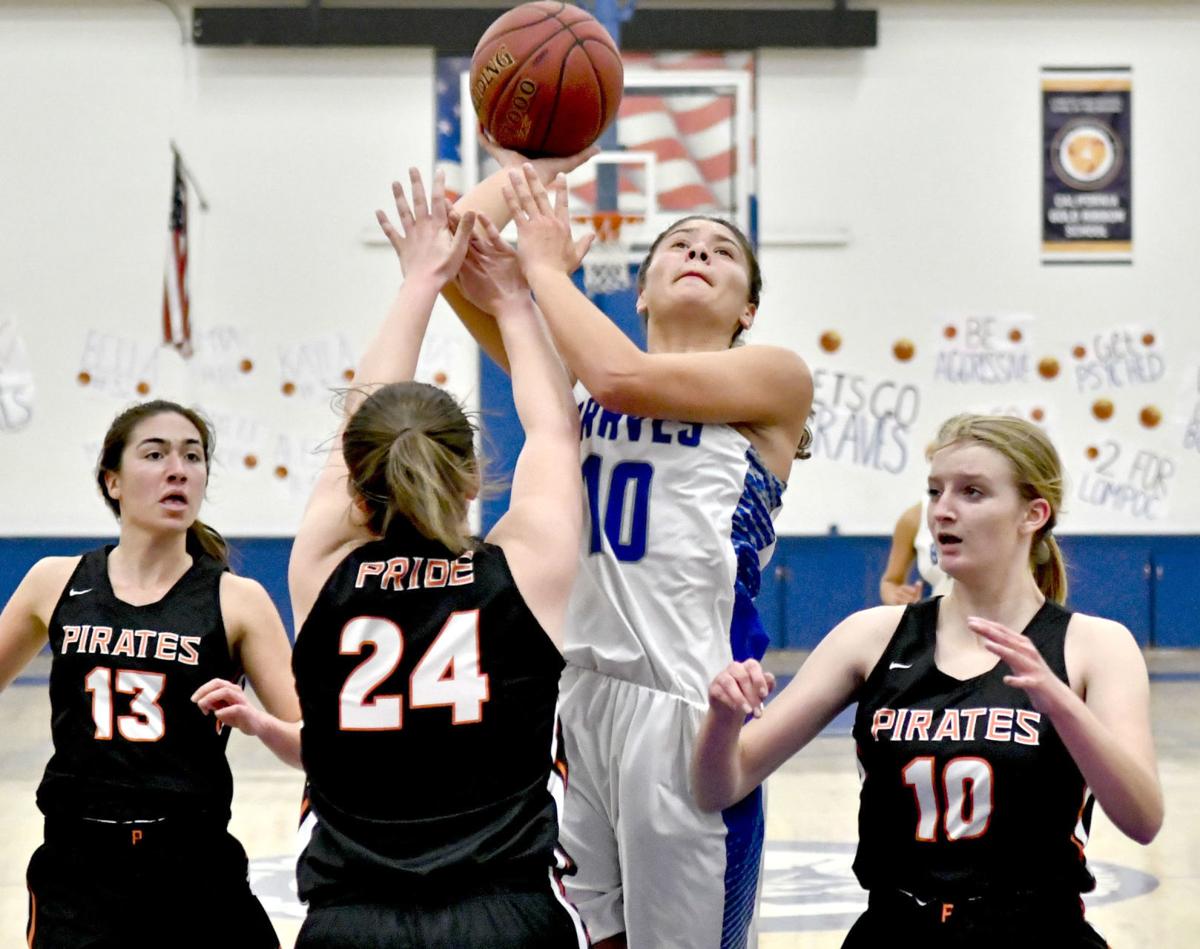 Lompoc's Mya Mendoza shoots over Santa Ynez's Grace Padilla (24) and Madison Holbrook (10) during the teams' game last January. Mendoza is back as a junior.

There is no middle ground in terms of experience for the Lompoc High girls basketball team.

Nearly every player is either experienced and entrenched in a starting role or complete newcomers.

"We're pretty young, I'll tell you that," said Claudia Terrones, Lompoc's coach and the school's athletic director. "We have three solid returning starters and everybody else is one year on varsity or no years. My sixth man off the bench right now is a freshman. Then I have a sophomore as my seventh girl, who didn't play varsity at all."

For his efforts, the junior was named the league's Offensive MVP.

Lompoc's three returning starters are Kayla Taylor, Mya Menoza and Alyssa Grossi. Taylor, a senior, can dominate at times in the post for the Braves. Taylor had a double-double in the season-opening game against Pioneer Valley last month, scoring 24 points while grabbing 12 rebounds.

"I think, team chemistry-wise, they are right where they need to be," Terrones said of her trio of experienced players. "They're proving to be good leaders on the team by helping the other girls out. I have 10 girls on my team right now and there are four returners on varsity and everybody else is new."

With so many new faces on the LHS roster, Terrones has been busy making sure everyone is ready to play when Channel League competition heats up in 2020.

"We're having a lot of really good practices, a lot of tough practices," Terrones said. "A lot of learning has to happen because we have so few returners. We've got to get the other girls up to speed."

The Northern Santa Barbara County Athletic Round Table made its return from the Thanksgiving break Monday.

The first girl off the bench for the Braves is freshman Cheyenne Cordova, who scored 13 points and finished with five rebounds in her first varsity game.

"She is a player," Terrones said of Cordova. "She's very coachable and she came in and is really good at everything she does. She's very athletic, she played varsity volleyball. She'll make the varsity softball team, too. She's very coachable, very raw but she plays hard every time she's in there."

Sophomore Natalie Soriano will also be counted upon to add some scoring punch. She scored 10 points in the season-opener. Lainey Mendoza is another freshman on the roster, joined by sophomores Shantel Gonzalez, Mallory Branum and Annabelle Quinonez. Mendoza and Alivia Boatman are the only juniors on the team.

Heading into Tuesday night's game against Paso Robles, the Braves were 1-2 on the season. They started the year with a 74-58 win over Pioneer Valley, a team that split the Ocean League title last year with Nipomo.

Taua and Cooks lead Nevada to bowl eligibility once again

Growing up on the Central Coast, Elijah Cooks and Toa Taua did a little bit of everything playing in the various youth football circuits. In 2018, the local duo joined forces at the University of Nevada, Reno, to become surprise contributors to an improved Wolf Pack program.

"We're going through growing pains right now, but in the end, our thing that we're looking for is that in the second week of January we will be ready to compete," Terrones said.

No matter the personnel, Terrones' offensive and defensive game-plan doesn't change. The Braves are known for high-pressure, full-court defense that doesn't let up. Lompoc uses that to create easy scoring opportunities on the other end of the floor.

"Obviously, my philosophy will probably never change on offense: If it's there, it's there," Terrones said. "We're going to push the ball, we're going to get up the court and run-and-gun. If we do get into a half-court set, I do think that our offense is pretty good.

"We're looking to go inside and if they double down on our bigs then we're going to relocate and be ready to shoot the ball."

Taylor will focus on sucking in the defense to create perimeter scoring chances. Taylor, of course, can also score in the post on her own.

The 6-foot Taylor isn't the only Brave with adequate size in the front-court. Lompoc also has the services of Haylee Zavala, a sophomore who's 6-foot-2.

"Having two bigs that can finish, I think teams are going to have a pretty tough time against us," Terrones said.

"We'll be competitive again," Terrones said of league play. "We were playing for a championship in the last game and when we lost we went from first to third. So I think that, because we have key players coming back, we will make some noise and be up there."

The Braves will be hosting the 13th annual Bryan Ayer Classic this week.

Boys basketball: Cast your vote for Player of the Year

Gage Gomez and Robert Hutchens? Jincho Rivera? Or maybe Daren Sosa! Those are some of candidates for our fan vote for SMT Player of the Year.

"With two yards to go for a CIF football championship, South Torrance put the ball in the hands of their toughest running back, Eric Capacchione," Brad Memberto wrote on Dec. 10, 2010. "As he made the turn towards the end zone, Lompoc linebacker Joseph Valla reached down deep and pulled the fullback down just short of the goal line.

Running out of hope: Area coaches have athletes stay in shape, though they're doubtful season will resume

Upon the announcement that all spring sports in the area were suspended because of COVID-19, the coronavirus, area coaches gave their athletes…

The top-ranked Pirates' run seemed about to end in the quarters. Santa Ynez hadn't done much against Baldwin Park Sierra Vista right-hander Erik Gutierrez and trailed 2-0 at home going into the bottom of the sixth. Then they came alive.

Football: Cabrillo High has found its next head coach

Cabrillo High athletic director Gary West said the school has an agreement in place for its next head football coach in Andy Guyader, who has coached at Cal Poly and Army as part of Rich Ellerson's staffs.

Girls basketball: It's your turn to vote for Player of the Year (again)

Check out the candidates for the Central Coast Player of the Year honor and cast your vote again.

Girls basketball: It's your turn to vote for Player of the Year

Check out the candidates for the Central Coast Player of the Year honor and cast your vote!

Lompoc's Kayla Taylor blocks a shot by Cabrillo's Morgan McIntyre during a game last January. Taylor is back and set to lead the Braves into 2020.

Lompoc's Mya Mendoza shoots over Santa Ynez's Grace Padilla (24) and Madison Holbrook (10) during the teams' game last January. Mendoza is back as a junior.