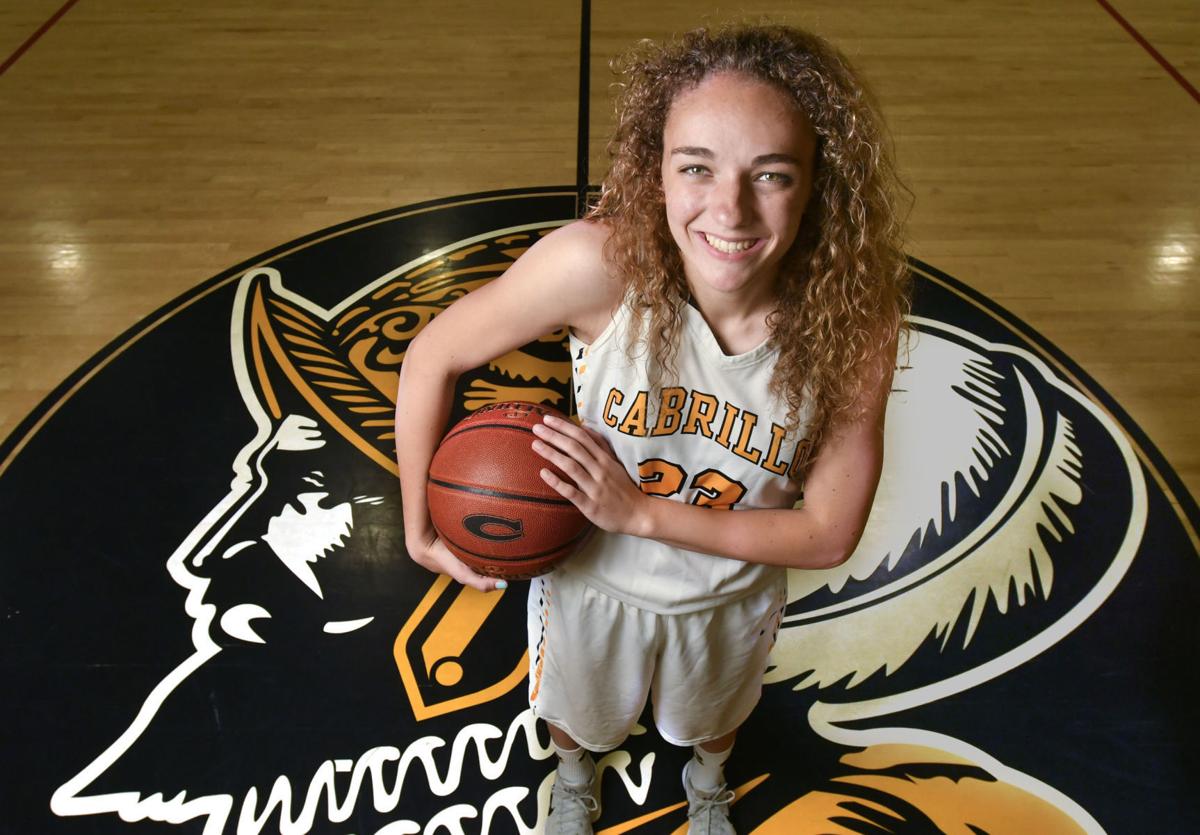 Cabrillo High School's Erin Jenkins was named the girls basketball All-Area MVP for two consecutive years, in 2017 and 2018. She's the first nominee for Player of the Decade in girls basketball. 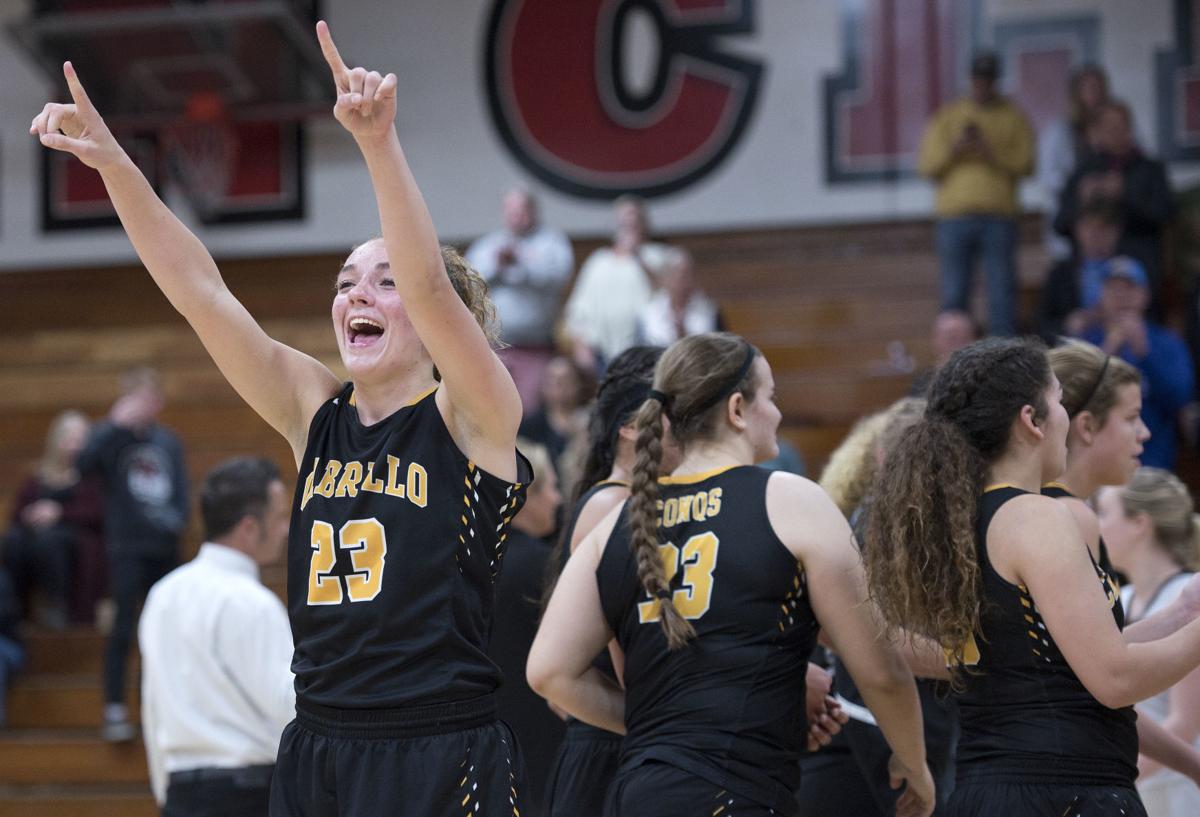 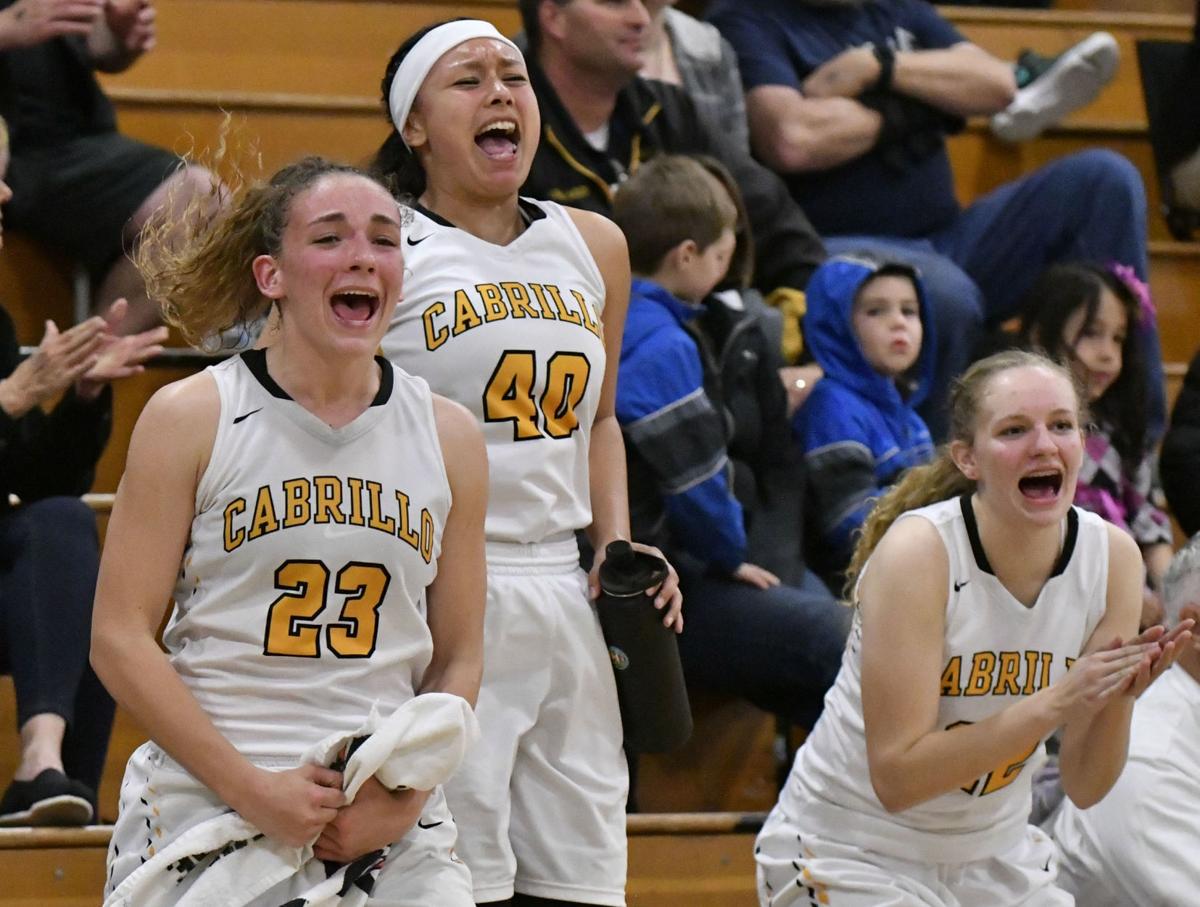 Cabrillo's Erin Jenkins, Valerie Monzon and Alexa McCune celebrate a Cabrillo basket as the clock runs out against Golden Valley to win a CIF state basketball game on March 7, 2018. 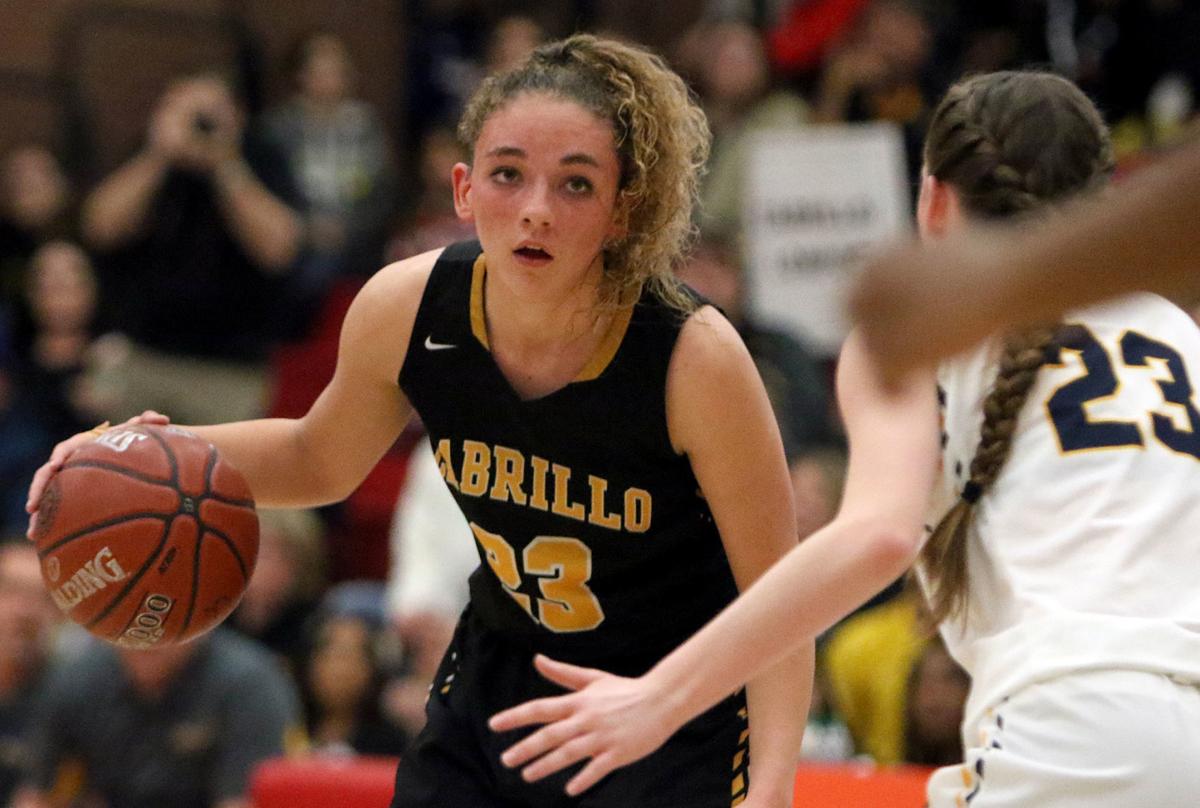 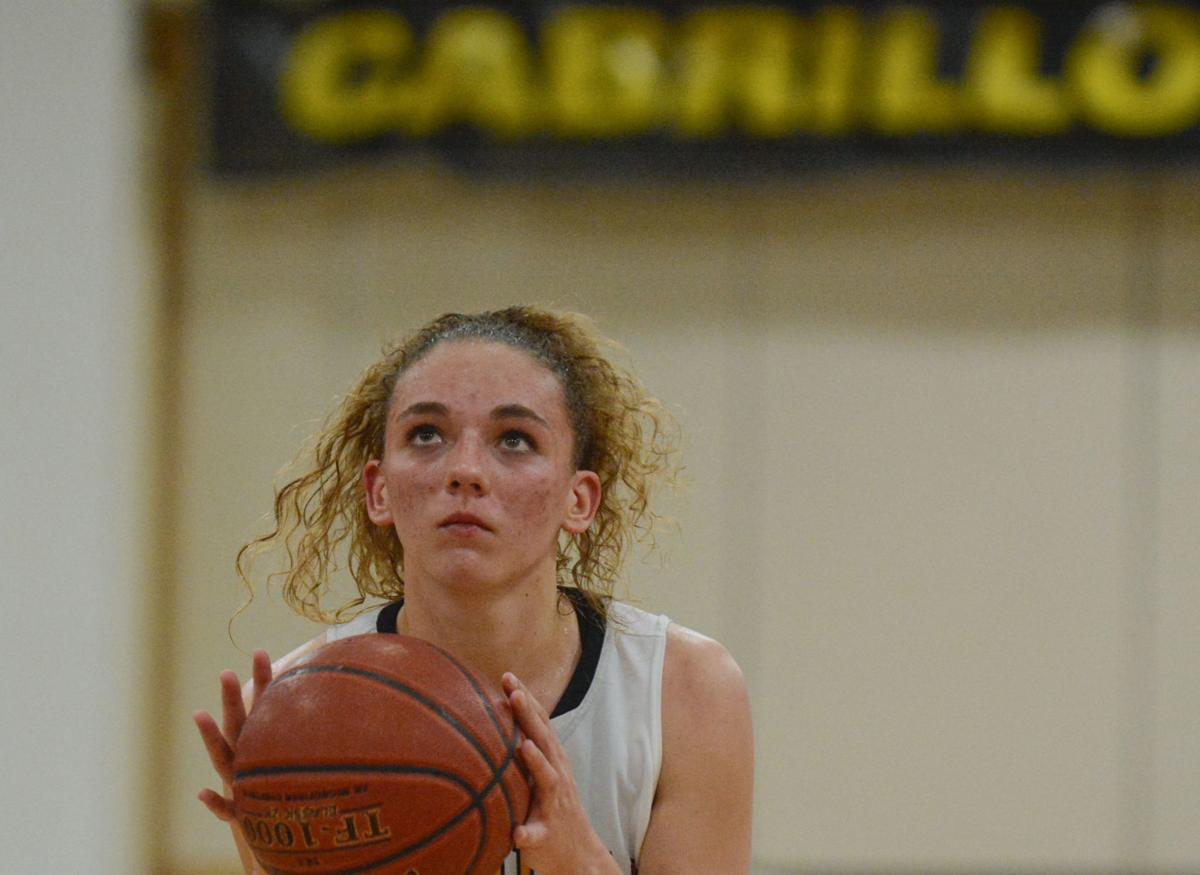 Cabrillo's Erin Jenkins shoots a free throw against during a state playoff game against Golden Valley on March 7, 2018. Jenkins was named to the All-CIF team on Monday.

With hundreds of girls basketball players hitting the court every year on the Central Coast, being named the All-Area MVP even once is quite a task.

But Erin Jenkins accomplished that feat, one of only three players to do so since 2000.

“I also received a few other scholarships to go to Tiffin,” including a 2020 President Scholarship, worth $13,000, because of her academic marks at Santa Maria, said Baez.

Jenkins was named the Times' All-Area MVP in 2017 and 2018, after her junior and senior years at Cabrillo High. Aly Beebe (2010 and '11) and Meghan Gnekow (2001 and '02) are the only other players to do that this century. Both Beebe (St. Joseph) and Gnekow (Santa Ynez) went on to sign with Pac-12 schools, Beebe joining Stanford and Gnekow playing for USC.

Jenkins played the past two seasons at Northwest Nazarene in Idaho, where she grew up.

The former Conquistadore is the first nominee for Player of the Decade in girls basketball. The list of nominees from Northern Santa Barbara and South San Luis Obispo counties is put together by the sports staff at the Santa Maria Times, Lompoc Record and Santa Ynez Valley News, which has queried area coaches for their input while also researching league awards, individual statistics and team achievements.

Jenkins was voted the All-Area MVP twice by the sports staffs at the Times, Record and SYV News. She was named her league's MVP three times. She earned All-CIF honors as a senior.

As a young coach, Reck took over the Santa Ynez girls basketball program in 1976. The ENTIRE program.

“I was the girls varsity and junior varsity coach,” Reck told the Times’ Joe Bailey before being inducted into Santa Barbara's Court of Champions in 2016.

Erin Jenkins could shoot, drive, pass and defend at a high level. During her senior season, she averaged 20.3 points, 8.6 rebounds, 3.4 assists and 3.3 steals per game.

"I honestly wanted this award because I felt I worked really hard for it," Jenkins said after winning her second straight All-Area MVP award in 2018. "I don’t mean to brag – but I feel like I put a lot of effort into this season and this is a big accomplishment for me because we lost two key players.”

Jenkins led the Conqs to another Los Padres League title and the championship game in the CIF Southern Section Division 3AA playoffs in her senior season without key contributors Britney McCune and Kiki Dial. Cabrillo lost to Downey Warren 47-42 in overtime of the CIF-SS title game, losing out on a chance for its first-ever girls basketball title.

Jenkins started 24 of 27 games this past season at Northwest Nazarene. She averaged 23 minutes a game and shot 48 percent from the field, averaging 11 points and 3.8 rebounds per game as a sophomore.

Tuitele wrote that he worked late five to six nights a week, living pretty much a subsistence existence, “However, by the grace of God, I had just enough to pay off my college tuition and housing rent for two years straight,” Tuitele wrote.

During her four years on the Cabrillo varsity, Jenkins helped the Conqs win 94 times, with Cabrillo losing only 17 games. The Conqs won at least a share of the Los Padres League title all four years. Cabrillo went 28-0 in league over Jenkins' final two seasons and 51-7 overall in that span. During her career, Cabrillo went 54-2 in league games, with the only two losses coming to Lompoc in her freshman and sophomore seasons.

“With my role on this team, I really feel like I just try to motivate everyone to the best of their abilities. My role on the court is I run the ball,” Jenkins said in 2017.

The rest of the nominees will be released. Readers can then vote for the Player of the Decade.

One of the most irritating aspects of this game (besides the TV blackouts, labor disputes and overpriced hot dogs and parking), are the 'unwritten rules' that I hear so much about. (Also, if these rules are so important, why don't you all write them down?)

Owens, now 29, has used her athletic background to move into the next phase of her life. She is a fitness athlete, trainer and business owner based in Fayetteville, North Carolina. Owens owns and operates Athlete Inner Fitness, working with clients who are intent in following intense workout regiments.

The right-hander would go on to star in the youth baseball ranks and eventually at Santa Maria High School, where he graduated in 1973. Smith then pitched with the Hancock College Bulldogs before signing with the Baltimore Orioles in 1974.

Player of the Decade: Molly Schlemer went from good at Righetti to great at Cal Poly

Schlemer is the second nominee for the Santa Maria Times' Player of the Decade award for girls basketball, joining the first, Erin Jenkins of Cabrillo High. The list of nominees is compiled by the sports staff at the Times, Lompoc Record and Santa Ynez Valley News, which is polling current and former coaches and researching individual and team accolades. Players in graduating classes from 2010-2020 are eligible.

Herlihy is the third nominee for the Times' Player of the Decade award. She joins former Cabrillo standout Erin Jenkins, a two-time All-Area MVP, and Righetti graduate Molly Schlemer, who earned All-Big West honors with Cal Poly after starring at Righetti.

From the Vault: Johnnie Gray's journey began at Lompoc High and ended up in Green Bay Packers Hall of Fame

Gray was always an above average athlete, but he preferred baseball. He never played football, that is until his senior year of high school when Gray joined the Brave football team as a defensive back.

Cabrillo High School's Erin Jenkins was named the girls basketball All-Area MVP for two consecutive years, in 2017 and 2018. She's the first nominee for Player of the Decade in girls basketball.

Cabrillo's Erin Jenkins, Valerie Monzon and Alexa McCune celebrate a Cabrillo basket as the clock runs out against Golden Valley to win a CIF state basketball game on March 7, 2018.

Cabrillo's Erin Jenkins shoots a free throw against during a state playoff game against Golden Valley on March 7, 2018. Jenkins was named to the All-CIF team on Monday.