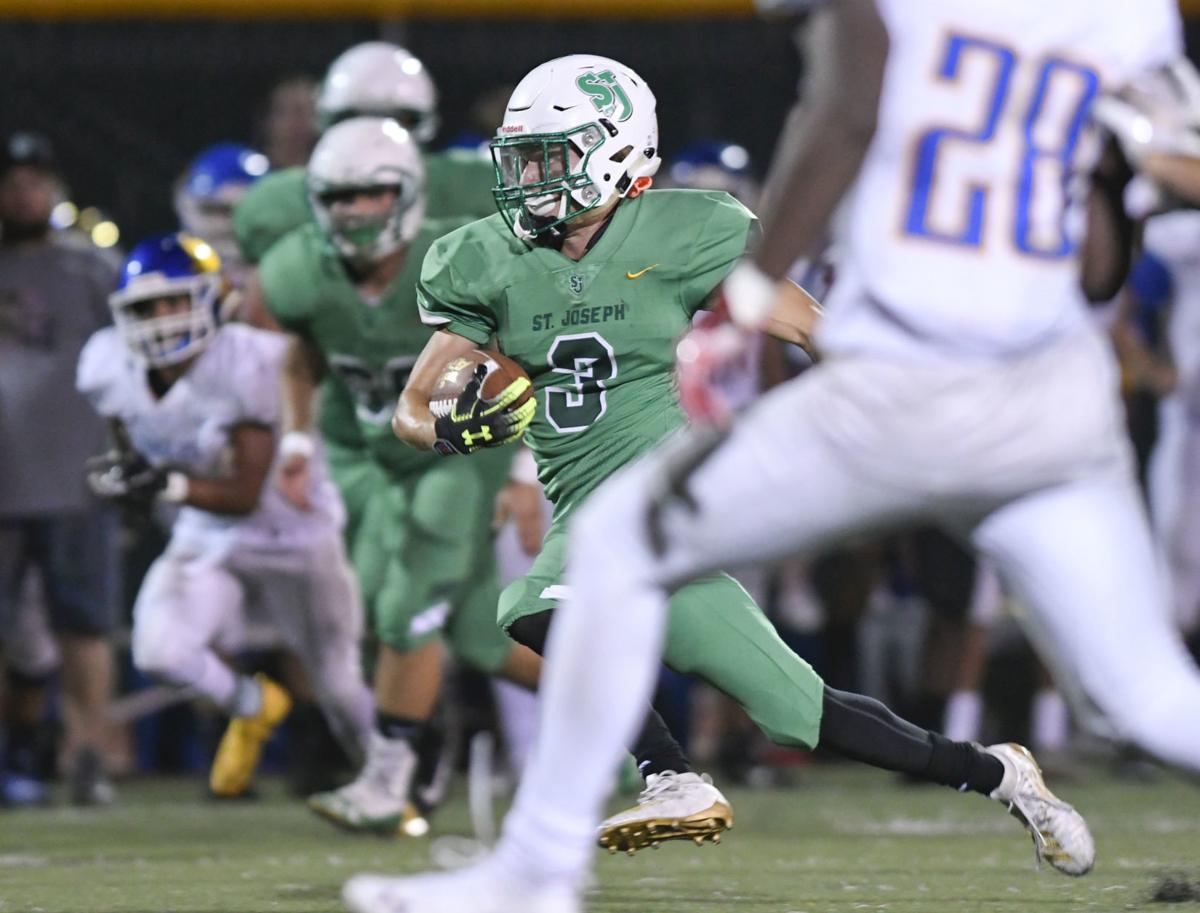 St. Joseph's Darien Langley breaks through the middle for a long touchdown against Bakersfield Christian on Sept. 13. Langley will be a key playmaker Friday night against Lompoc. 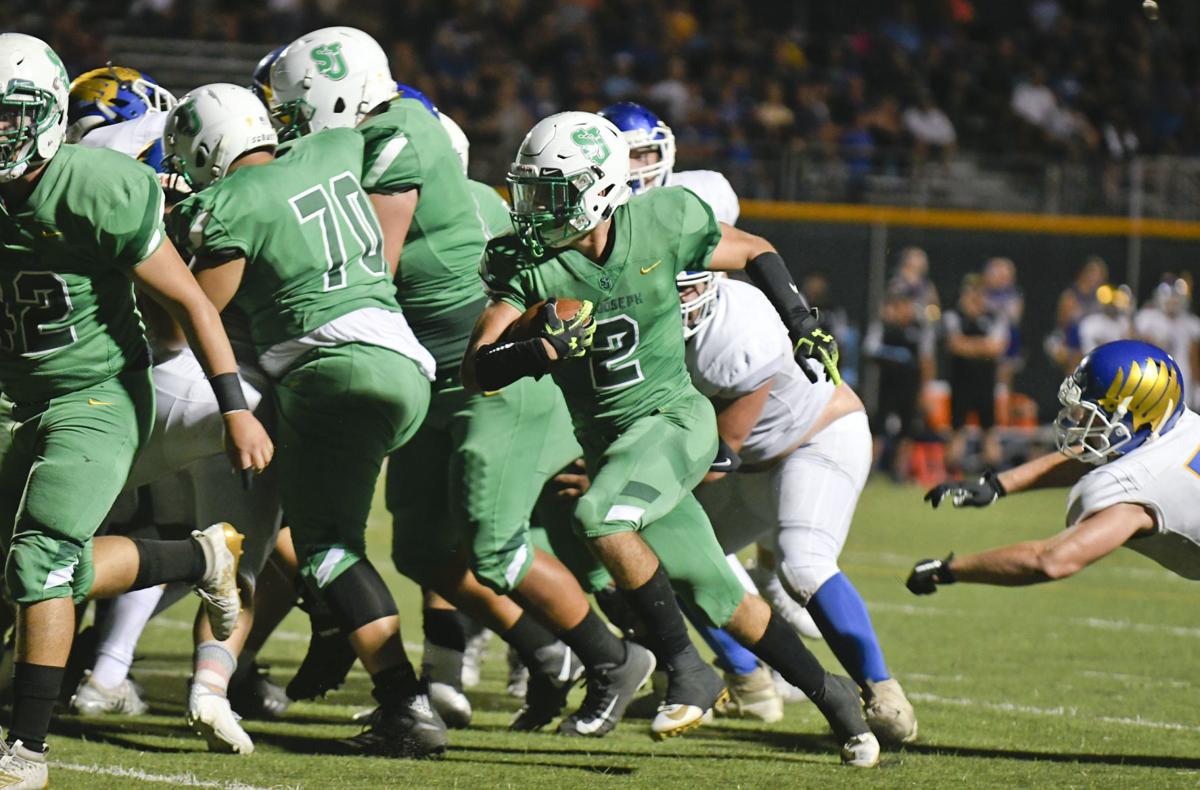 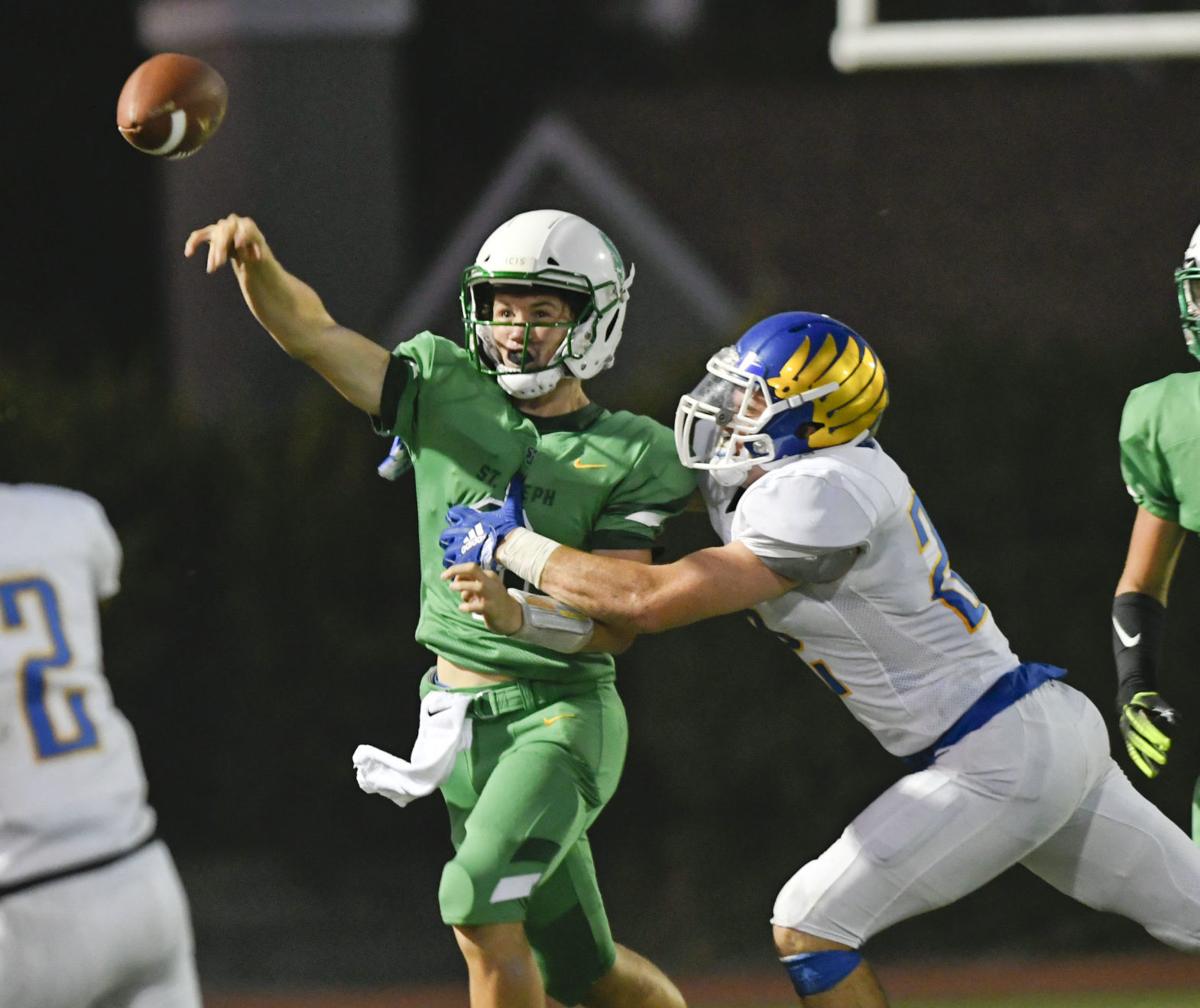 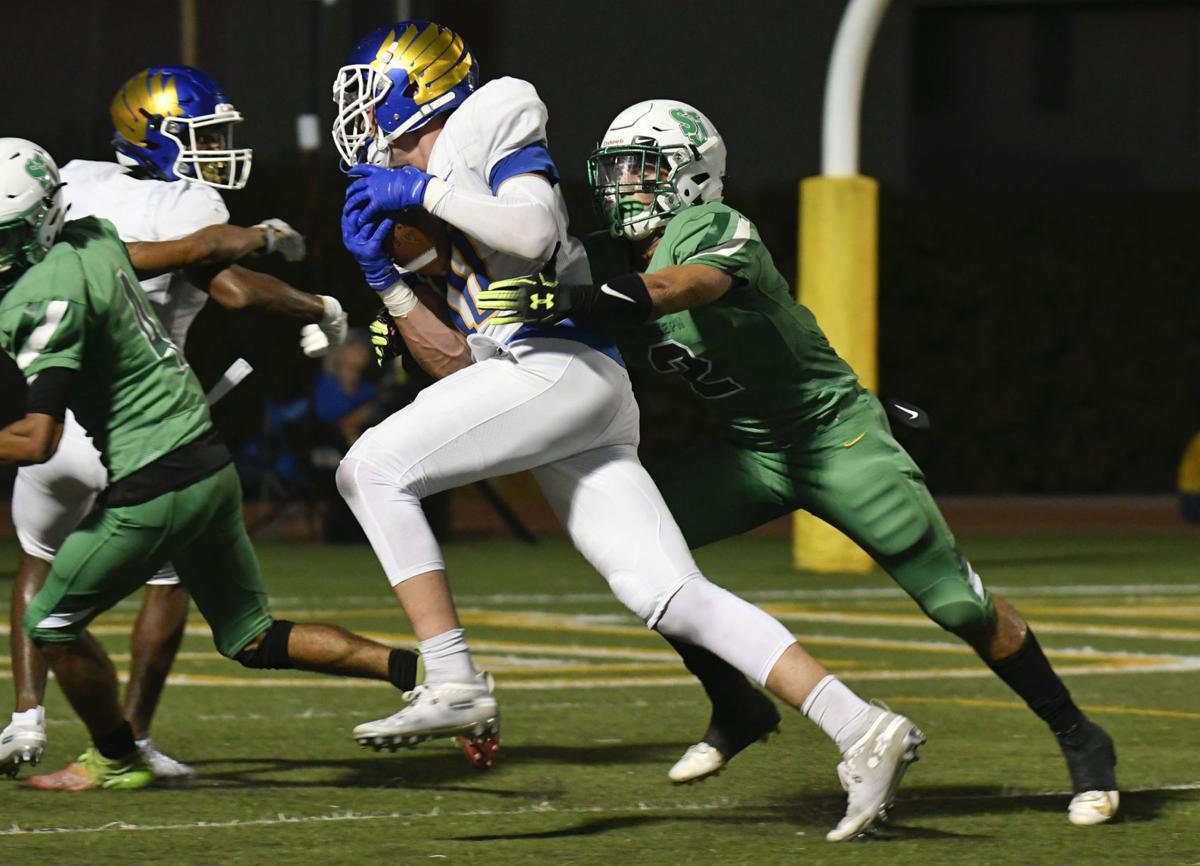 Bakersfield Christian has grown into the small-school powerhouse of the CIF Central Section.

A year after beating St. Joseph, the proud Central Coast program that transitioned to the Central Section in 2018, in Bakersfield, the Eagles got the best of the Knights again.

This time playing in Santa Maria, Bakersfield Christian (3-0) scored a come-from-behind 37-28 win over the Knights (2-1) in a highly-anticipated Coast vs. Valley showdown.

But Bakersfield Christian's athleticism and pure talent, particularly on offense, took over, scoring 20 straight points at one point.

David Stevenson, a senior running back, finished with 208 yards on 20 carries for Bakersfield Christian. His 81-yard touchdown run early in the fourth quarter came at a pivotal point in the game.

His lone miscue was a pass intercepted by Devin Guggia near the end of the first half.

Early on, it appeared the Knights would be the ones running away from the Eagles.

Week Three was another great week of football, and we had a classic rivalry matchup to start it off. Lompoc headed to Arroyo Grande to take on the Eagles, plus Righetti and St. Joseph both took on a BCHS (St. Joe's in a tough game against Bakersfield Christian and the Warriors getting past Bakersfield Centennial) in Orcutt.  Scores, videos, and photo galleries from the games are right here, along with our full game stories recapping all of the action from this evening.

But the Eagles answered right away and tied the game, capping a long march down the field with a 9-yard touchdown catch from Yurosek, who also plays defensive end.

The Eagles, who are coached by Oakland Raiders quarterback Derek Carr's older brother Darren, jumped out in front after the teams exchanged punts and Julius Salinas booted a 27-yard field goal late in the first quarter.

The Knights were the ones to respond after that, marching down the field and scoring on Devin Guggia's 9-yard touchdown run. Vincent Geronimo set up the score with a key 34-yard catch and quarterback Mark Crisp got the Knights into scoring position with a 20-yard scamper inside the 10.

The Knights then scored again, cashing in on a perfectly-executed tunnel screen to Langley, who caught the short pass, got a block from Max Stineman and raced past the BCHS secondary for a 50-yard touchdown. Brock Marcois' extra point gave St. Joseph a 21-10 lead with 6:29 left in the first half.

Yurosek then got the Eagles in scoring position with a pair of big-time receptions for 40 yards. He then caught his second touchdown from Gamboni on fourth-and-goal. Gamboni rolled to his right and fired a short pass to Yurosek near the goal line and the ball got past two St. Joseph defenders and into Yurosek's hands.

The Knights threatened to score before half, leading 21-17, but Crisp's pass to the end zone was intercepted by Ronnie Simril.

Guggia then intercepted a Gamboni pass and returned it 30-plus yards to set up Marcois' 48-yard field goal try, which came up short.

Devin Guggia with the INT and a huge return. Half a second left. Knights going for FG. #sjhsvsbchs pic.twitter.com/LB9vXAENyA

St. Joseph's offense stalled in the third quarter. In that quarter, a short St. Joseph punt set up BCHS at the Knights' 29. A few plays later Gamboni scored on a designed quarterback run to give the Eagles a 23-17 lead after a missed extra point.

The Knights recovered a BCHS fumble later in the third quarter but couldn't take advantage of it. Then, at the start of the fourth quarter, came Stevenson's long scoring run. Stevenson took the ball on an inside handoff and went left, then cut up the middle to wide-open space, he had one defender to beat and got past him with a swift move to the inside, racing past everyone else on the field for the 81-yard run.

Ronnie Simril gets the INT in the end zone for @BCHSSPORTS and Eagles have the ball down 21-17 with 42 seconds left Before half. #sjhsvsbchs pic.twitter.com/yptmV77l17

St. Joseph was set to punt on its next possession, but got an offsides call to keep a drive alive. Crisp then scored on a strong 6-yard run with 8:30 left in the game, cutting the Eagles' lead to 30-28.

But Yurosek came up big again, gaining chunks of yards on two receptions to set up Chris Gutierrez's touchdown catch with 6:01 left.

The Knights punted the ball away on their next possession and couldn't get BCHS off the field with enough time left in the two-score game.

Ronnie Simril gets the INT in the end zone for @BCHSSPORTS and Eagles have the ball down 21-17 with 42 seconds left Before half. #sjhsvsbchs pic.twitter.com/yptmV77l17

Devin Guggia with the INT and a huge return. Half a second left. Knights going for FG. #sjhsvsbchs pic.twitter.com/LB9vXAENyA

📣 Ring the bell, sound the horn, tell a friend. Tell two! The Playoffs are here! 📣 The Lompoc Braves took on Glendora, and the Saints headed to the Central Valley, but Foster Road in Orcutt was lit up with playoff action. St. Joseph hosted Fresno Sunnyside and Righetti took on Bakersfield Stockdale. Check out results from the action here with photos, videos and stories from the games.

St. Joseph's Darien Langley breaks through the middle for a long touchdown against Bakersfield Christian on Sept. 13. Langley will be a key playmaker Friday night against Lompoc.