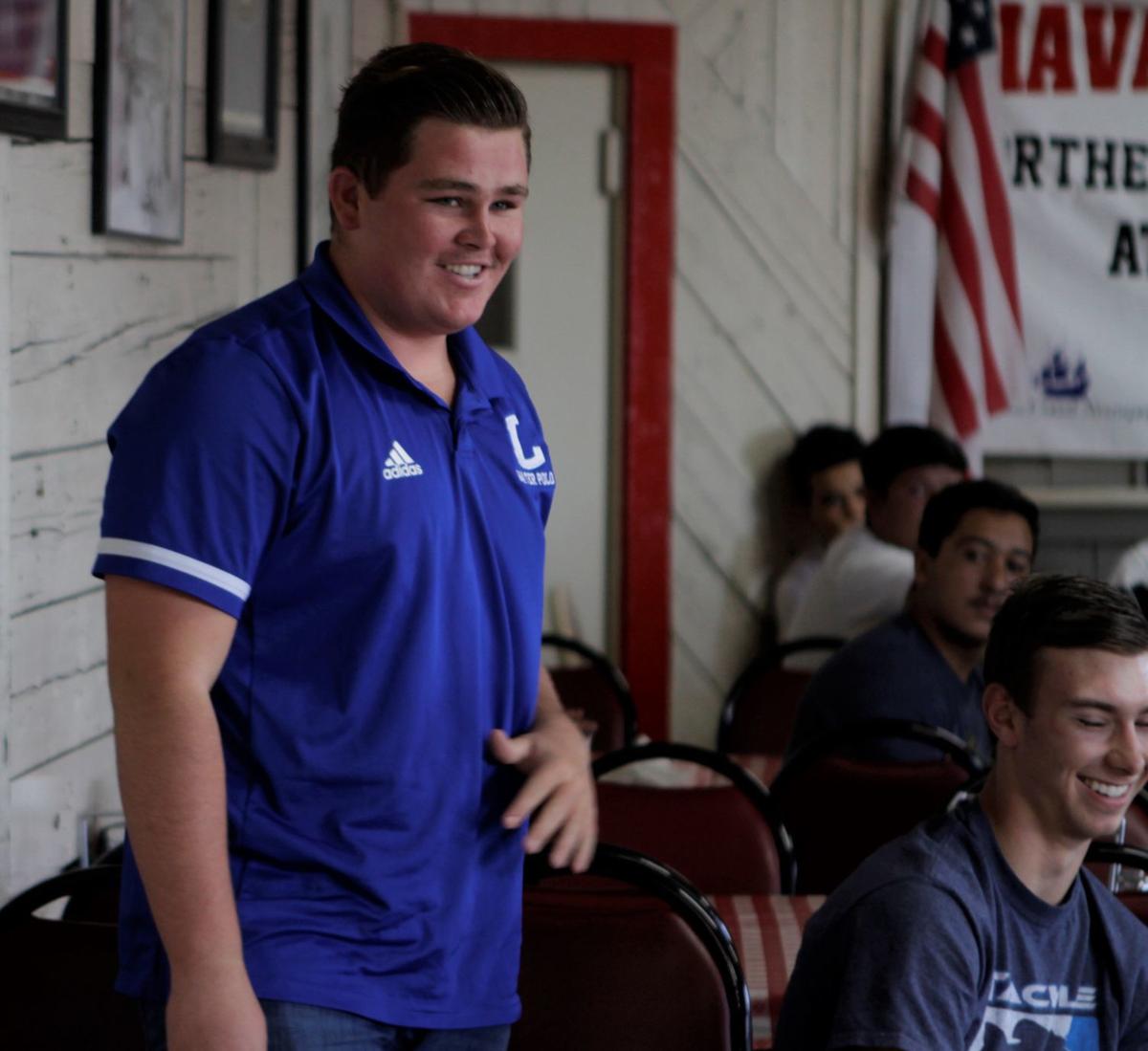 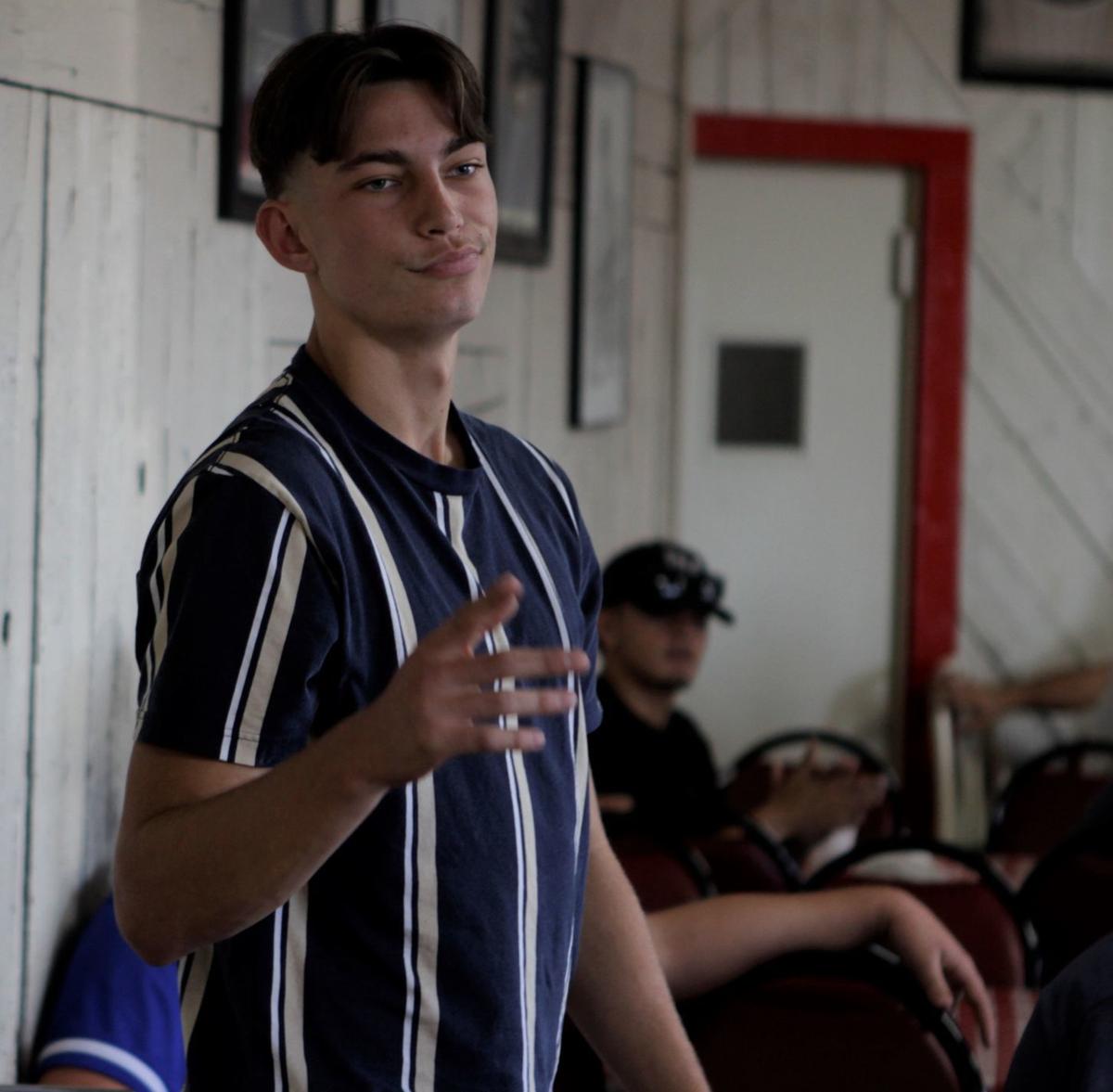 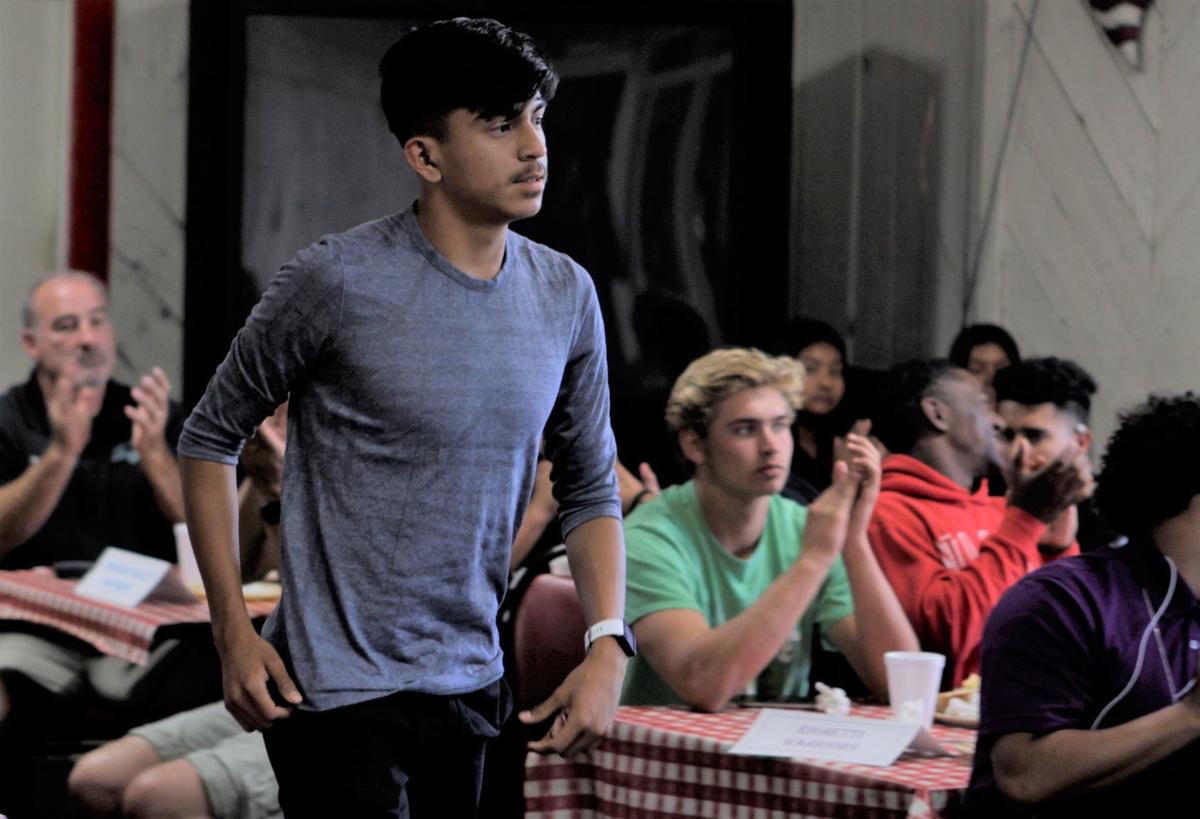 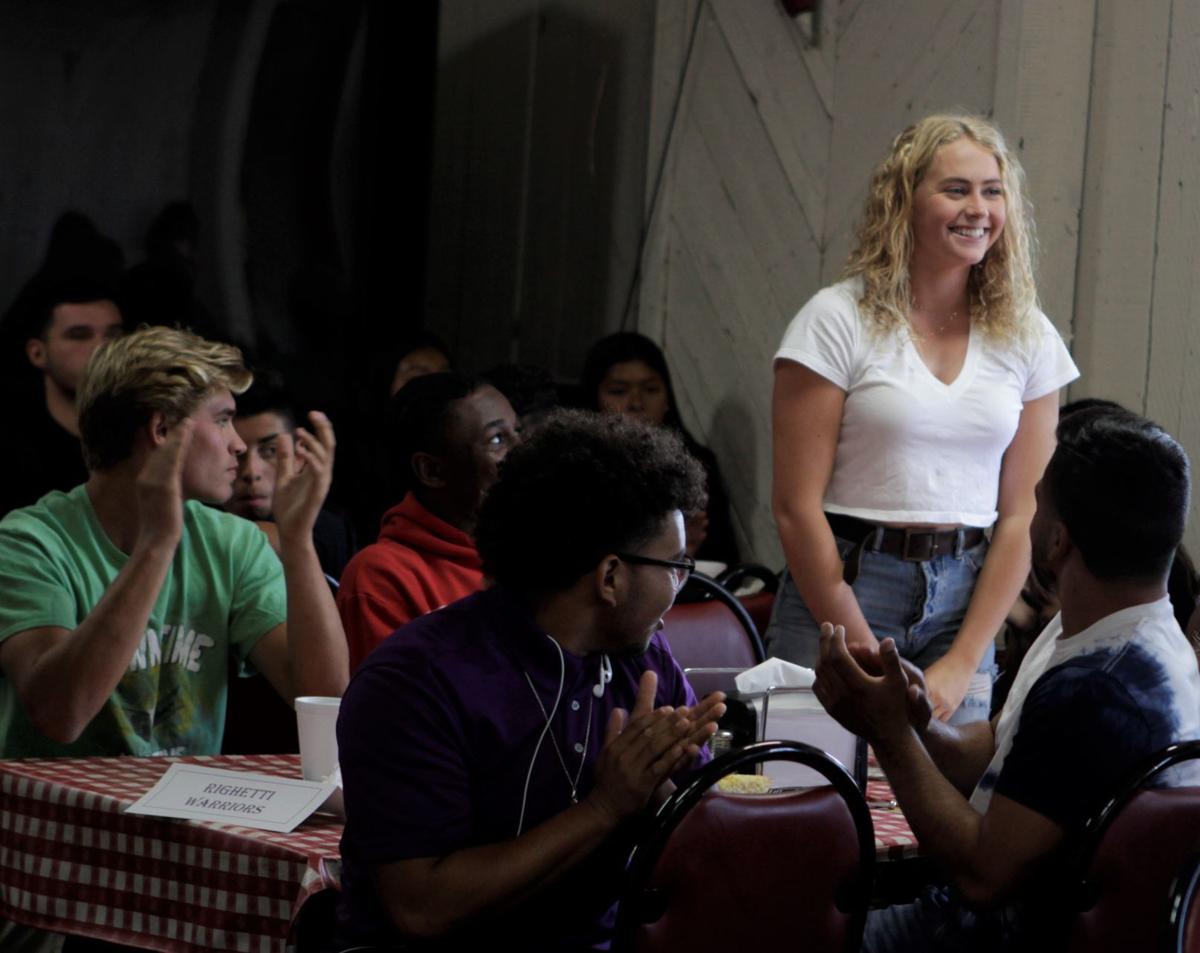 Righetti water polo player Sidney Alter is introduced at Monday's Round Table in Orcutt. Alter, a junior, is one of the top scorers on the Righetti girls team. 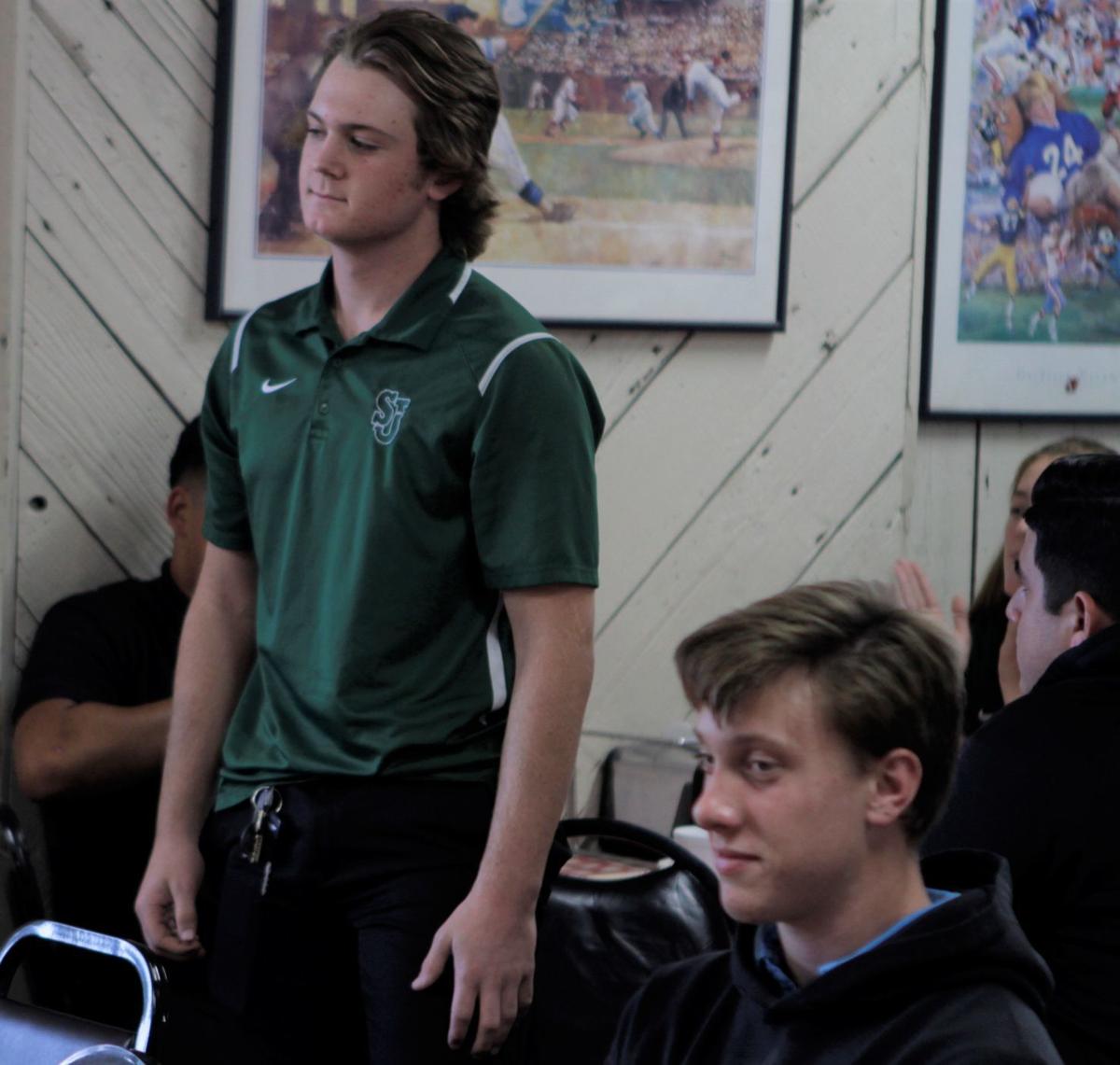 St. Joseph running back Brett Burress is introduced at Monday's Round Table after he ran for more than 100 yards and scored two touchdowns in last Friday's 21-20 win over Paso Robles. 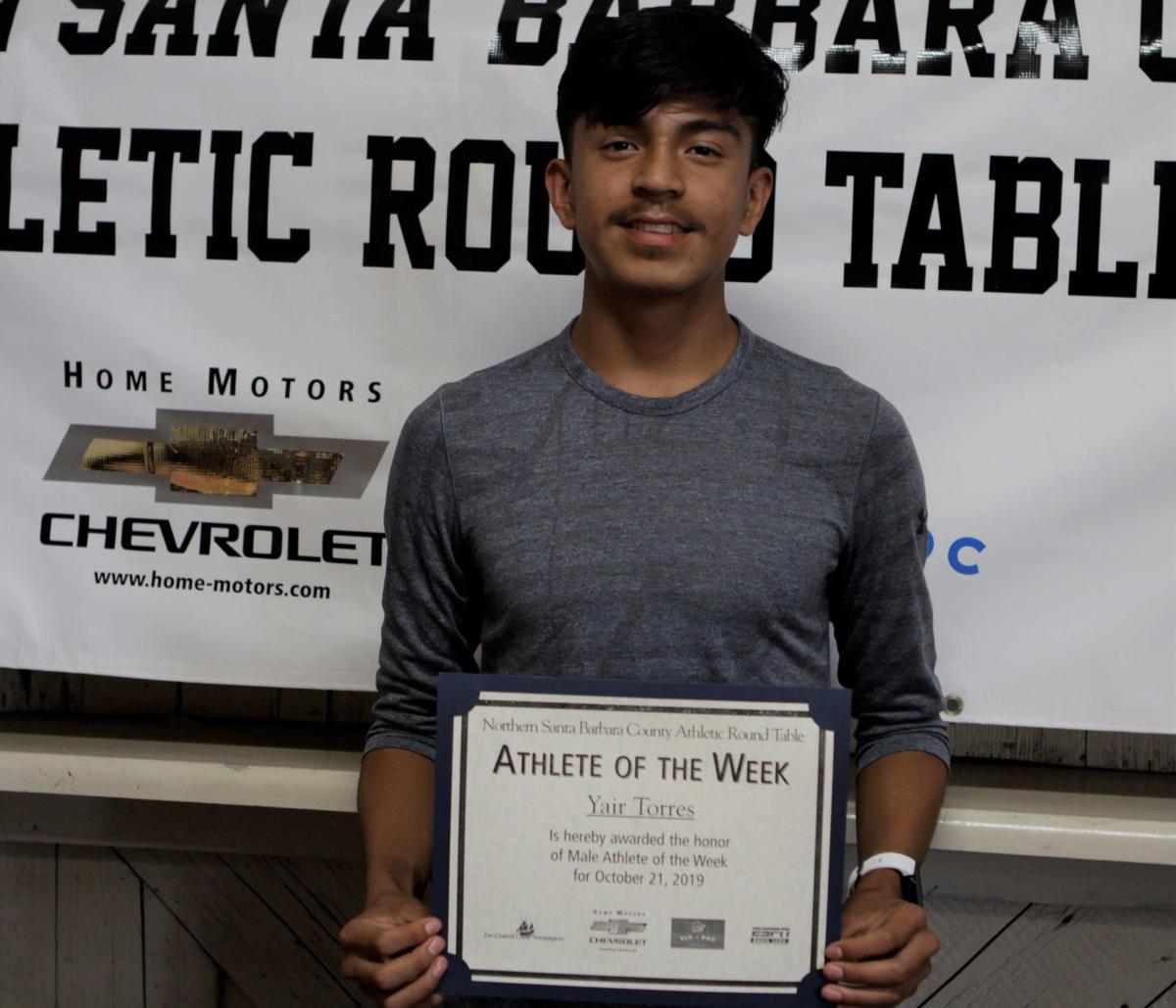 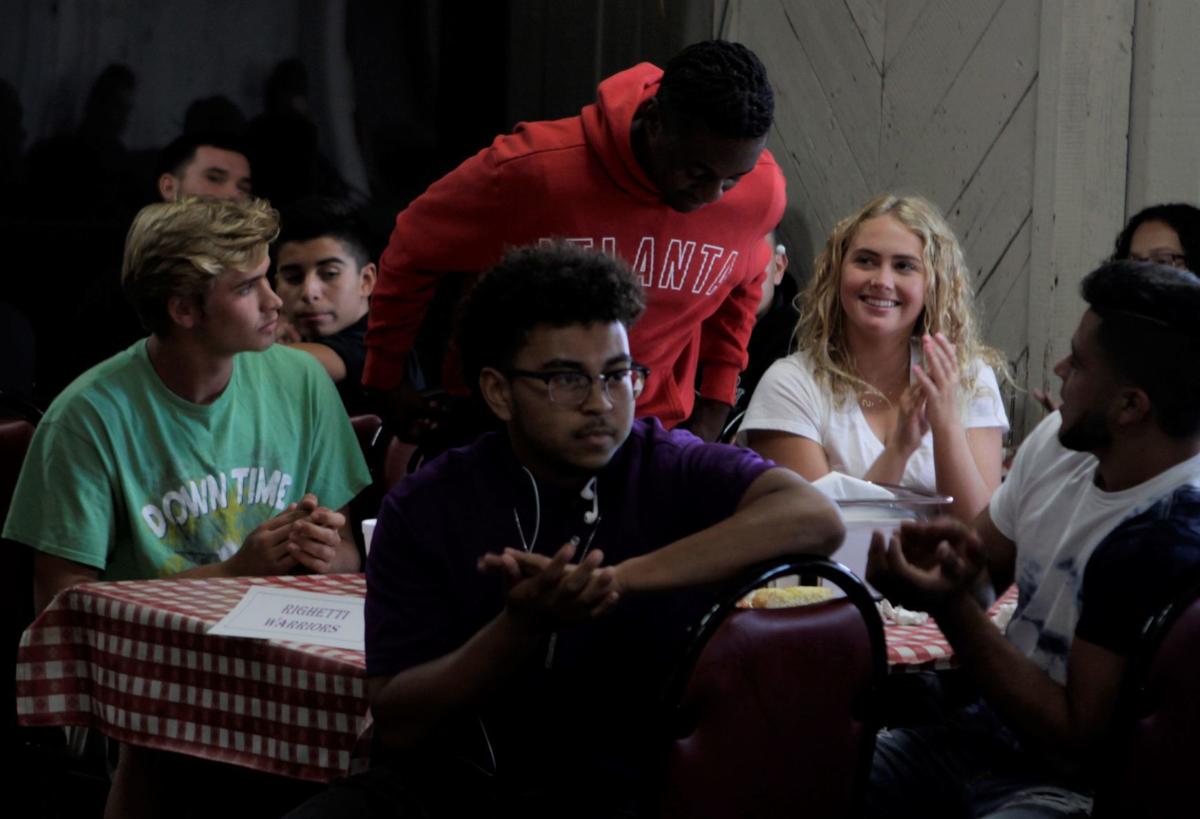 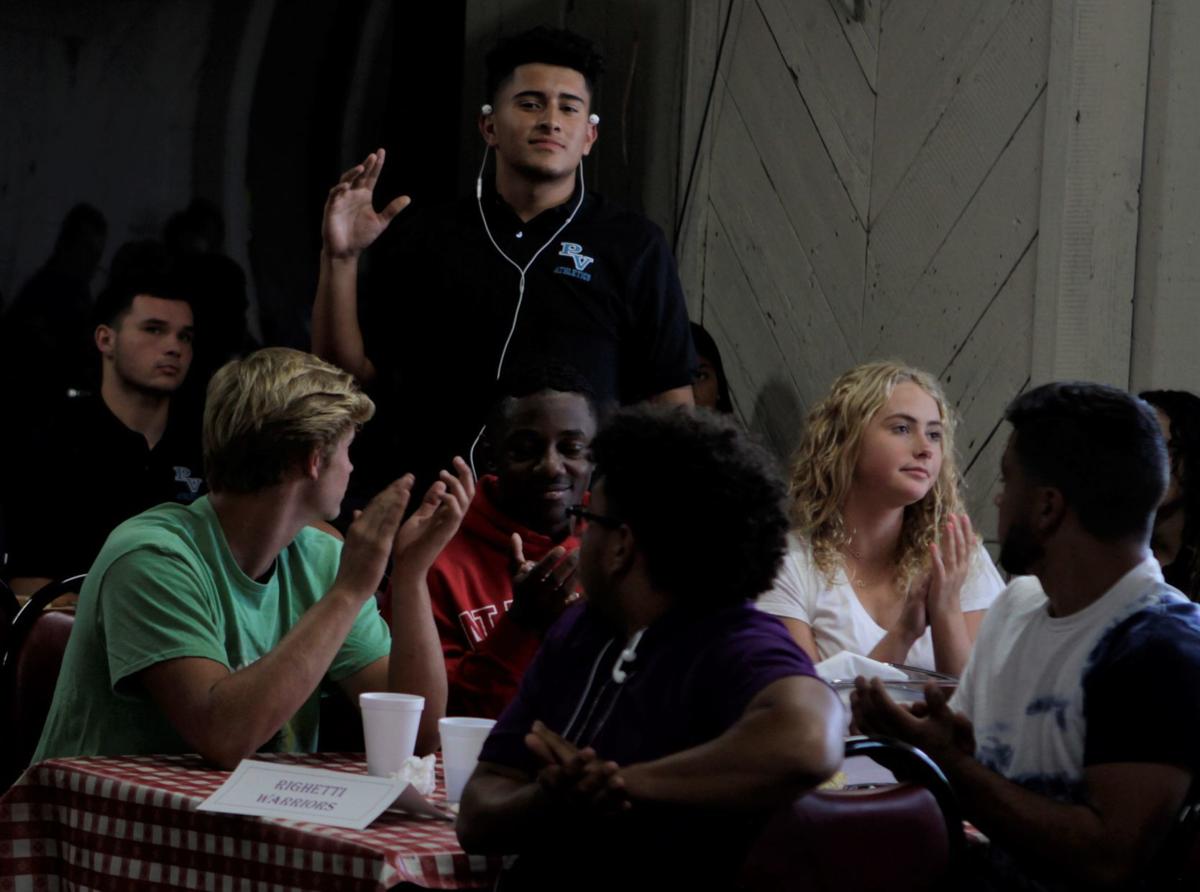 Pioneer Valley quarterback Danny Martinez is introduced at Monday's Round Table at Giavanni's Pizza in Orcutt.

He may set a Round Table record for number of Athlete of the Week wins.

On Monday, Torres, a junior on the Saints cross country team, was named the Northern Santa Barbara County Athletic Round Table Male Athlete of the Week during the luncheon held at Giavanni's Pizza in Orcutt.

But this wasn't his first win or even his second. Monday was the third time that Torres has accepted the Athlete of the Week award during his high school career. He's won it twice for cross country and also once during the track season.

On Friday, Torres led his Saints team to a win at the Dos Pueblos Invitational and set his personal and school record with a time of 15 minutes. This season, Torres has finished either first or second in every race he's ran.

"It's not too different," Torres said of the feeling from his first AOTW win to his third. "I just keep on my grind. It's been a team effort, every day we keep running and progressing. That's the only way you can get better: Run every day and don't skip practices. Now I'm just preparing for CIF and focused on winning or placing top three in the race."

St. Joseph High golfer Bella Aldridge won the Female Athlete of the Week award after helping the Knights finish 12-0 in Ocean League play last week with a pair of wins over Pioneer Valley. Aldridge shot a 47 and a 49 to earn co-medalist honors in two duals.

Aldridge and the Knights are preparing for Wednesday's Ocean League Finals, which will be held at Morro Bay Golf Course. She was not able to attend Monday's Round Table luncheon, held at Giavanni's Pizza in Orcutt.

Photos: Check out the scenes from Monday's Round Table

Santa Ynez kicker Quincey Valle was named Homecoming queen at halftime after she went 5-for-5 on point-after tries in the first half.

"Not very often does your female kicker win Homecoming queen. She didn't wanna come to Round Table, but that's pretty typical of Quincey," McClurg said. "She doesn't like the limelight."

The Pirates also brought football players Lars Ladinig, Brandon Welby and Tyler Germani. Germani had five sacks against Cabrillo as the Pirates had 10 as a team.

Also in attendance for Santa Ynez was Camilla Curti and Claire Collison, the Pirates' top doubles team for tennis.

Ryan Hill spoke for PVHS water polo which featured players Deisy Sanchez and Zitlaly Hernandez from the girls team and James Diaz and Alex Velazquez from the boys squad.

Ashley Barbosa represented Panther tennis Monday. Barbosa was the only PVHS player to make it to the second day of the Ocean League Finals last Friday.

"Bruin has made a real big sacrifice this year moving from linebacker to defensive line for the team," PVHS athletic director Jeff Monteiro said of Chapman, who earned All-Ocean League honors last year at linebacker but switched positions this year.

"Sidney is an exceptional athlete," Yee said of Alter, who's a junior. "She's one of our top two leading scorers and she leads the team in assists... Ella has only been playing for about a year, but she does things at such a high level I forget how new she is."

"Joe is the leader of our defense," Payne said of Cardenas, who blocked two kicks and returned one for a touchdown in a loss against Arroyo Grande last Friday. "If you asked anybody on our team who would be the leader on our defense, they would've said anybody but Joe. That's the reality. But his energy and sacrifice has been unbelievable. I'm so proud of him."

In his first season playing water polo, the senior Hayes, who goes by 'Big Country,' averages 10 saves a game and has 14 assists on the season with five goals.

As for the football season, which featured a 27-21 loss to Santa Barbara for the first league loss in nearly nine years and 44 games for the Braves, Barrett said, "Sometimes you're the windshield and sometimes you're the bug. But we're probably three plays from being 8-0." Lompoc is 5-3 with losses to Righetti, Arroyo Grande and Santa Barbara by a combined 19 points.

"We had a great game on Friday. It was a really great high school football game... we just lost," Wallace said of the 29-27 defeat at Mission Prep in an Ocean League game. "We missed an extra point at the end of the game that would've tied it up, but the guys played their hearts out. One of the best games I've ever seen."

Martinez, the team's quarterback, had 184 rushing yards and three touchdowns. He also started at safety on defense and had nine tackles and a forced fumble.

"Fabian is now playing both ways, he's our starting center and our defensive end," Wallace said of Montano. "He's one of the more coachable kids on our team. He's got good grades and he's just a positive role model for the younger guys."

Bianca McNeil brought water polo players Aden Anderson and Justin Jones. Anderson has scored 12 times and has 15 assists for the Knights and has played multiple positions, including goalie and set defense. Jones has 32 goals on the season to lead the team.

Debbie Wegemer spoke for the rest of SJHS athletics.

"The football team was about ready to give me a heart attack Friday night," Wegemer said of the Knights' 21-20 win over Paso Robles where they needed a stop on a last-second two-point conversion to seal the Mountain League win. "Josiah is a linebacker and he's all over the place. Wherever the ball is, that's where Josiah is."

Burress was award the alumni football award for rushing for over 100 yards and two scores.

"The award is an old beat up lunchbox and Brett gets his name on it," Wegemer said. "It's for the hardest worker and whoever leaves it all out on the field."

St. Joseph travels to Arroyo Grande for a Mountain League game on Friday at 7 p.m.

The Round Table is scheduled to return to Giavanni's on Monday, Oct. 28. Hancock College, Cabrillo and Orcutt Academy were not present at Monday's Round Table.

High schools began practicing with helmets and shorts Tuesday and will continue through Thursday. They can then hold full padded practices Friday, continue practicing next week, hold a scrimmage March 12 or 13 and have bona fide games on March 19.

Cross country: Cabrillo and Santa Ynez runners happy to be back

In the midst of the COVID-19 pandemic Saturday, their first race of an abbreviated season was a winning one for Cabrillo senior Gabriella Nels…

Righetti grad Matt Sauer ready to get back on the mound

Sauer is now 22 years old and about 24 months removed from Tommy John surgery. He was hoping to make his comeback from the major arm surgery in 2020, but the coronavirus pandemic wiped out all of the minor league baseball season.

Pioneer Valley baseball has some 'unfinished business' to take care of

After the 2020 seniors missed out on their seasons, Pioneer Valley's 2021 class is happy to be back on the diamond having set some goals for the year.

The Conquistadores got just five games in last spring before the season was suspended and eventually canceled due to the coronavirus pandemic.

Righetti water polo player Sidney Alter is introduced at Monday's Round Table in Orcutt. Alter, a junior, is one of the top scorers on the Righetti girls team.

St. Joseph running back Brett Burress is introduced at Monday's Round Table after he ran for more than 100 yards and scored two touchdowns in last Friday's 21-20 win over Paso Robles.

Pioneer Valley quarterback Danny Martinez is introduced at Monday's Round Table at Giavanni's Pizza in Orcutt.