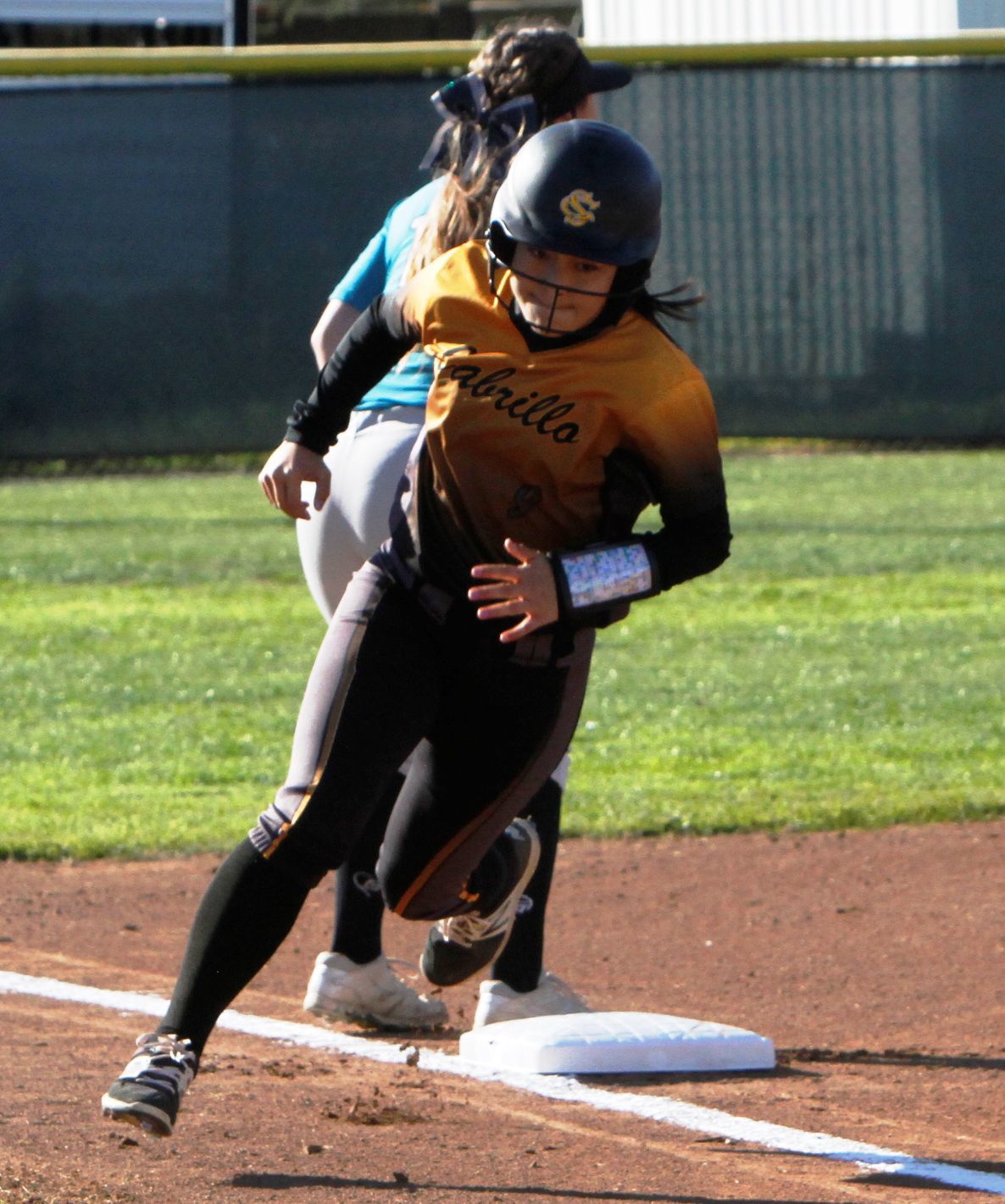 Cabrillo's Antoinette Terrones circles around third base and charges home for the Conquistadores' first scoring run of day against Pioneer Valley. Cabrillo trounced the Panthers 13-2 on Tuesday in the season opener for both teams. 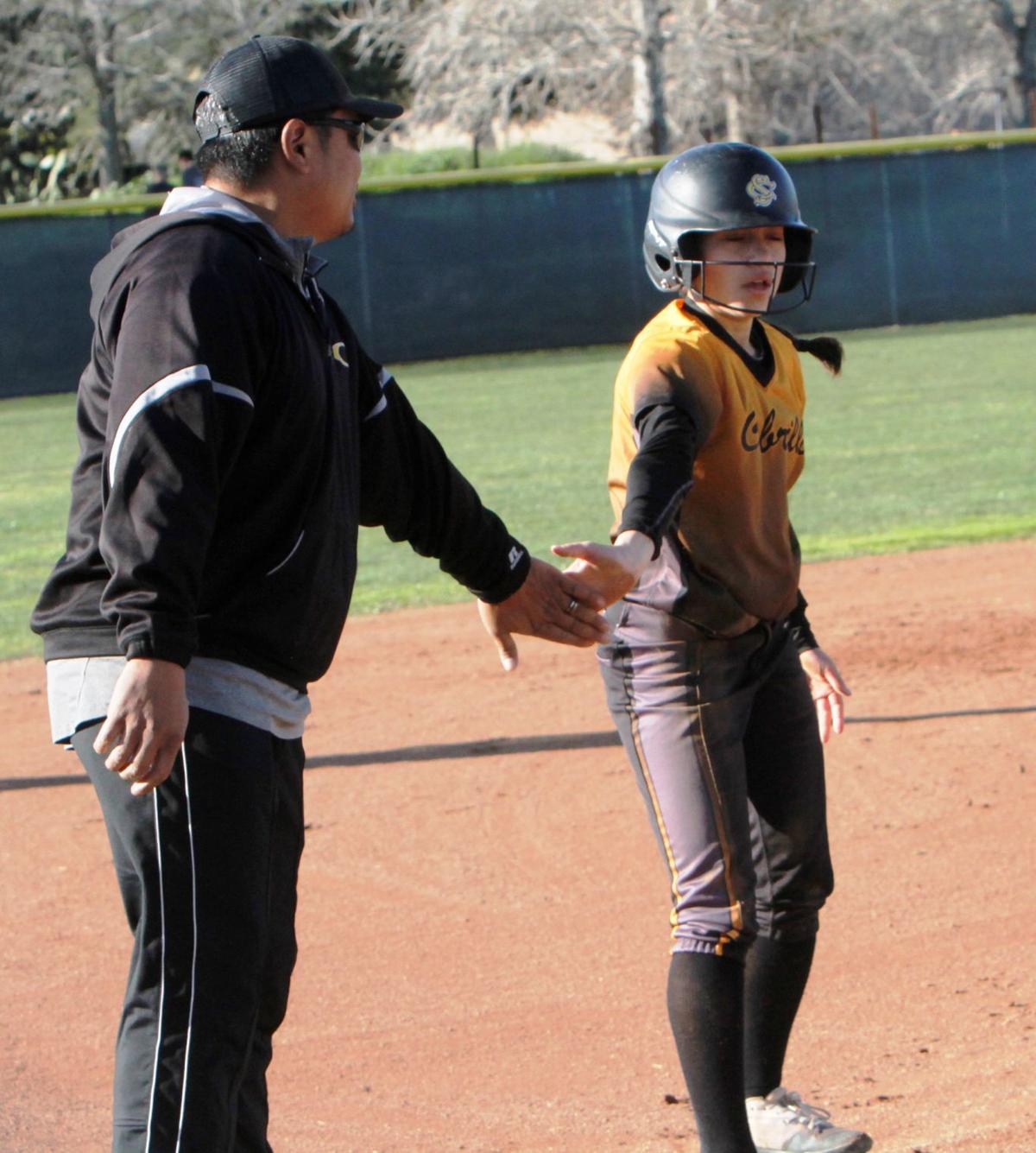 Cabrillo High softball head coach Adrian Abayari hinted before the season that hitting and fielding would carry this year’s Conquistadores.

Both were catalysts for CHS on Tuesday in its 13-2 rout of Pioneer Valley on the road in a game that used all seven innings.

The Conqs’ infielders and outfielders only surrendered two hits that fell or rolled into the PVHS grass. Mia Criscone threw a complete game in the opening win.

But offensively, the Conqs set the tone there.

Lead-off batter Antoinette Terrones got the first inning started by smashing a grounder toward right field that resulted in a double. Next up was Rhea Stone-Valdez, who drove her teammate home for the game’s first run on her ground ball single.

And things immediately swung toward Cabrillo’s direction from there.

Alexia Juarez-Wilhite, with the bases loaded, took the walk and got Stone-Valdez to cross home plate to make it 2-0. Then, Katie Heath pounded a ball between second and first base – which resulted in a botched force attempt at first base and led to two CHS runners coming home.

Softball: Cabrillo hopes to build on experience gained during 2018 season

Cabrillo (1-0) continued to pour it on during the opening inning and with temperatures beginning to drop to the 40s. Hannah Mendoza blasted her fly ball toward center field that ended up as a double that scored two more of her teammates. Criscone helped conclude the first with her short single that fell behind third base – luring Mendoza home for the 7-0 lead.

Abayari, who is now in his eighth season as head coach of CHS softball, liked how active his team was right away.

“I actually liked the fact that they were aggressive with the pitches. I have no problem with that whatsoever,” Abayari said. “I also liked the fact that we’re still aggressive on the bases and they took advantage of any kind of miscues that the other team would have. We almost put the game away in that first inning.”

The Panthers – 2-21 overall one season ago in the first year under head coach Kristina Sewell – got on the scoreboard in the bottom of the first inning through the bat of Breanna Galaites. She sent Alexia Rivas home with her RBI single.

In the third, CHS tacked on more runs onto the PVHS scoreboard – this time via Liz Garcia sending two of her teammate’s home on a dead ball at first, making it 9-1.

After one game, is this CHS softball team one that mirrors some of the past Conquistadores teams? Including the playoff teams Abayari produced?

“Every team is different,” Abayari explained. “They become their own personality over the course of the year. But from what you see here, we have some pretty aggressive players – and we’re not going to hold them back from being aggressive. Obviously we’re going to keep continuing to push, push and push until they just go all out all the time.”

He was especially impressed with how the Conqs did defensively. The infielders Terrones, Hunt and Brooklynn Gregory made timely catch and tags on their plate, while outfielders Mendoza, Stone-Valdez and Alina Terrones prevented the Conqs from watching the ball fall to the ground on multiple occasions.

“They communicated pretty well on situations that happened,” Abayari said about the defensive play. “Granted, when there was nobody on base (during one sequence) it was a routine play and they made the play.”

Overall, it was the kind of start Abayari hoped for out of his team.

“Each girl did what exactly what I thought they would do. Granted, there was some rust there. But I know what they’re capable of doing. They did fulfill it today.”

Cabrillo is now 6-0-1 in its last seven games against the Panthers. For Friday, the Conqs will now take on new Channel League opponent and the CIF Southern Section Division 4 title game runner-up from last year: The San Marcos Royals. That contest is set for 3:30 p.m.

Cabrillo will host Nipomo on Wednesday at 6 p.m.

The Cabrillo softball team got a late start to its 2020 season.

Cabrillo's Antoinette Terrones circles around third base and charges home for the Conquistadores' first scoring run of day against Pioneer Valley. Cabrillo trounced the Panthers 13-2 on Tuesday in the season opener for both teams.