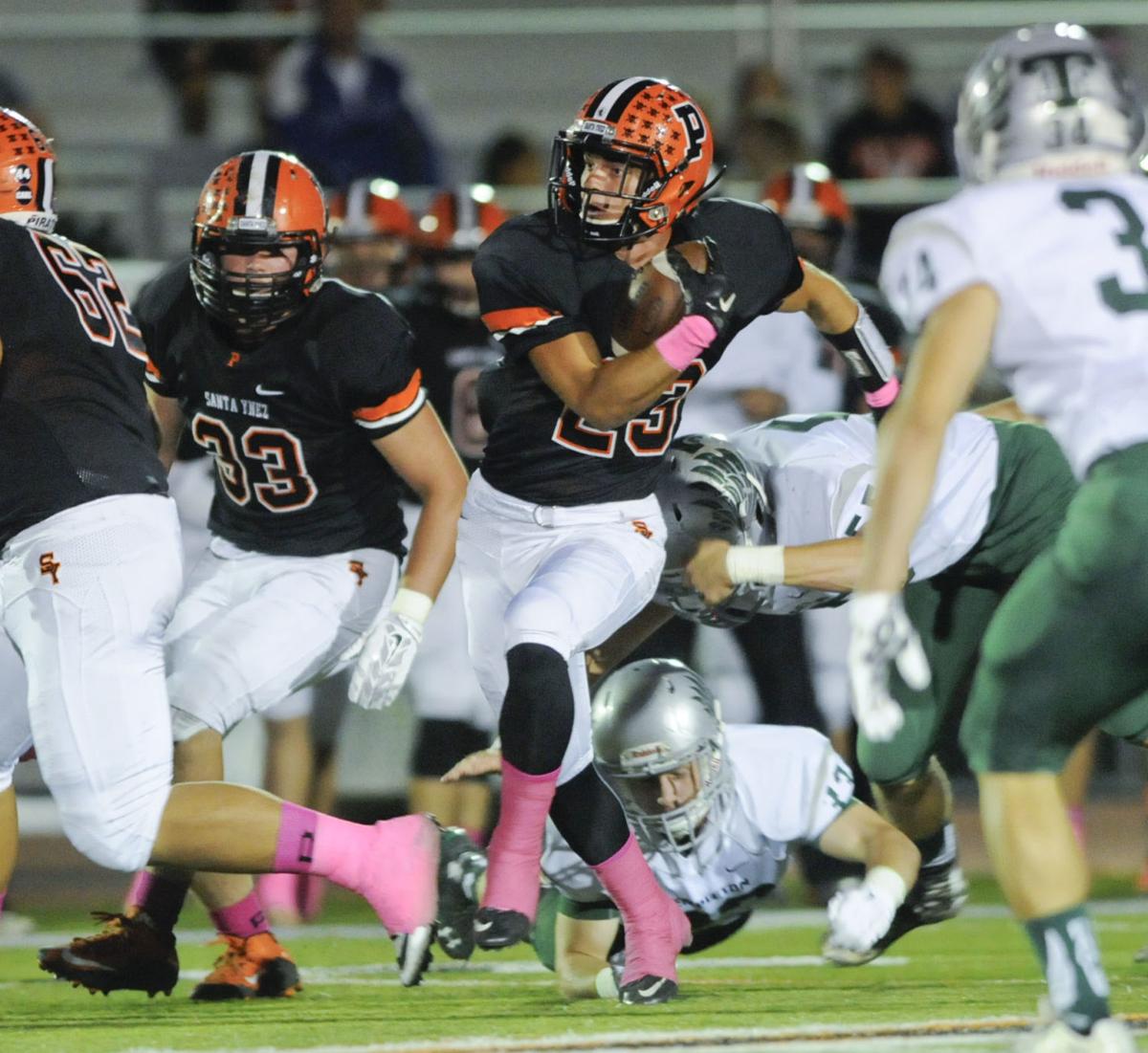 Santa Ynez senior Austin Vreeland runs behind teammates' blocks during a 2015 game against Templeton. Vreeland had 236 yards rushing on 19 carries with four touchdowns in the Pirates' 49-19 home win on that night. 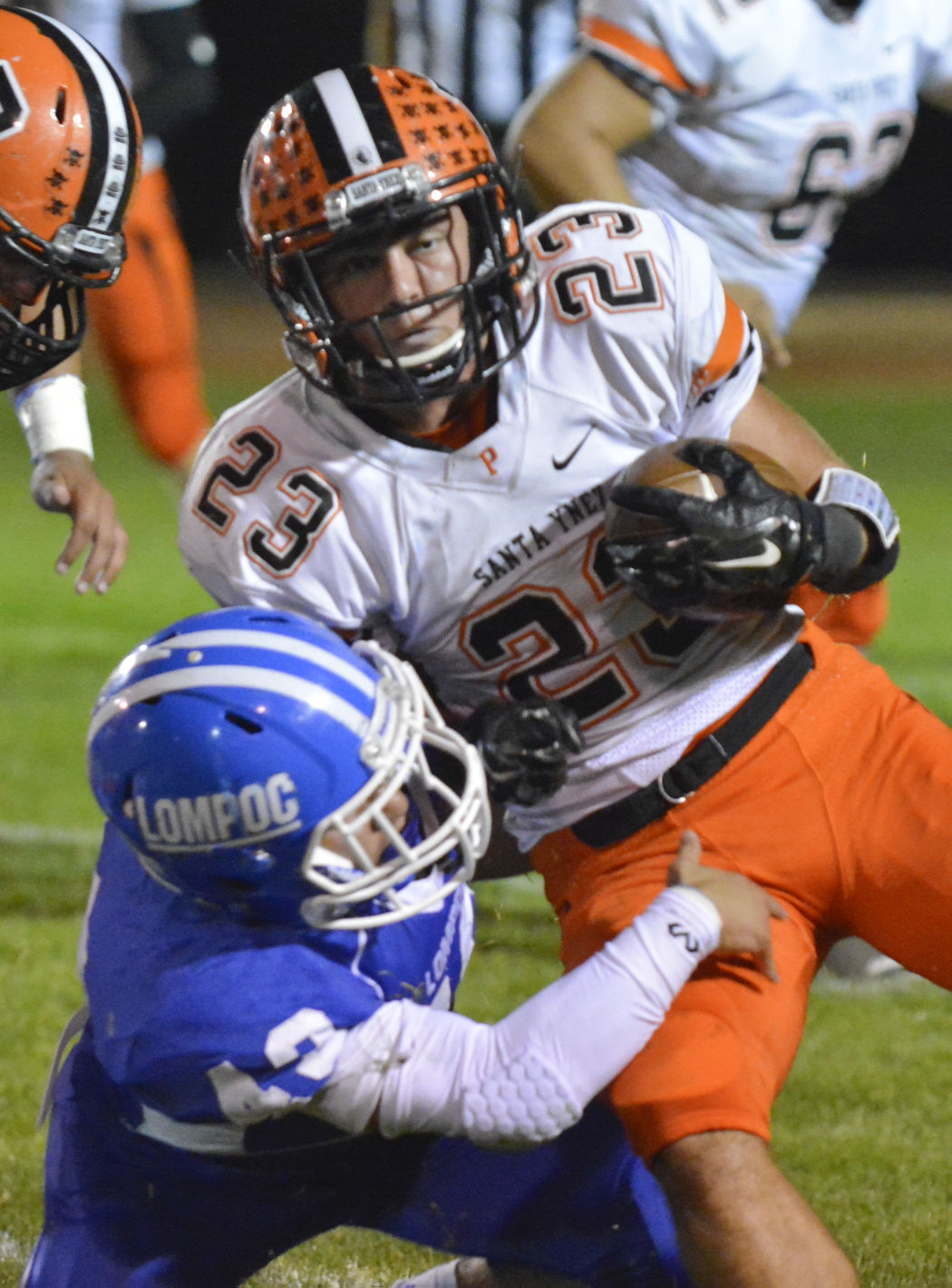 The year was 2012 and Austin Vreeland was playing in his second varsity game as a freshman at Santa Ynez.

The 5-foot-10, 175-pound speedster was already racing past the competition.

Vreeland reached the century mark in his second career game with the Pirates, carrying the ball 26 times for 100 yards and two scores in a 19-14 defeat to Cabrillo.

The following week, against Santa Maria, Vreeland showed that performance was most certainly not a fluke. Vreeland rushed for 187 yards on 32 carries with four rushing touchdowns in a 41-34 victory vs. the Saints.

Again, this is in Vreeland's freshman season. He proved to be a threat in the passing game as well. In the win over the Saints, he also caught five passes for 67 yards.

Vreeland had a solid freshman season for the Pirates and turned that into an illustrious football career in Santa Ynez.

Vreeland finished his first varsity season with 453 yards rushing on 116 carries with seven touchdowns. Vreeland nearly led the Pirates in both rushing and receiving that year, finishing first in receptions with 36 and second in yards with 375, just behind Spencer Armenta's totals of 29 for 480. Vreeland also caught three touchdown passes to reach double-digit touchdowns as a freshman.

He easily led the Pirates in rushing as no other Pirate crossed the 100-yard mark for the season that year.

Vreeland again led the Pirates in rushing as a sophomore, carrying the ball 90 times for 522 yards and three more scores. Again he was second on the team in receiving with 26 catches for 431 yards and one more touchdown.

Vreeland had his best receiving season as a junior in 2014, leading the Pirates with 30 grabs for 563 yards and seven touchdowns. He was second on the team in rushing with 85 carries for 455 yards and four scores.

The Pirates finally found some team success in 2015 as Vreeland put together his best season in black and orange. As a senior, Vreeland's Pirates went 7-4 as he led the team in rushing and receiving.

Vreeland had his best season as a runner as a senior, carrying the ball 112 times for 914 yards and 12 touchdowns. He also led the Pirates in receptions and receiving yards with 26 grabs for 428 yards and three more touchdowns.

Vreeland played in 36 varsity games during his Santa Ynez career, gaining 2,344 rushing yards on 403 carries with 26 touchdowns. He also caught 119 passes for 1,797 yards and 14 more touchdowns.

But Vreeland also contributed on the defensive side of the ball in his final three seasons with the Pirates. He amassed 122 total tackles (68 solo) with three interceptions and three forced fumbles.

After high school Vreeland joined Northern Arizona's football program as a walk-on but shortly turned his focus on the classroom and graduated from NAU without playing football there.

Sports have been written off and discounted as a welcomed distraction lately, something to watch on TV to get our minds off the chaos around us.

Santa Ynez senior Austin Vreeland runs behind teammates' blocks during a 2015 game against Templeton. Vreeland had 236 yards rushing on 19 carries with four touchdowns in the Pirates' 49-19 home win on that night.