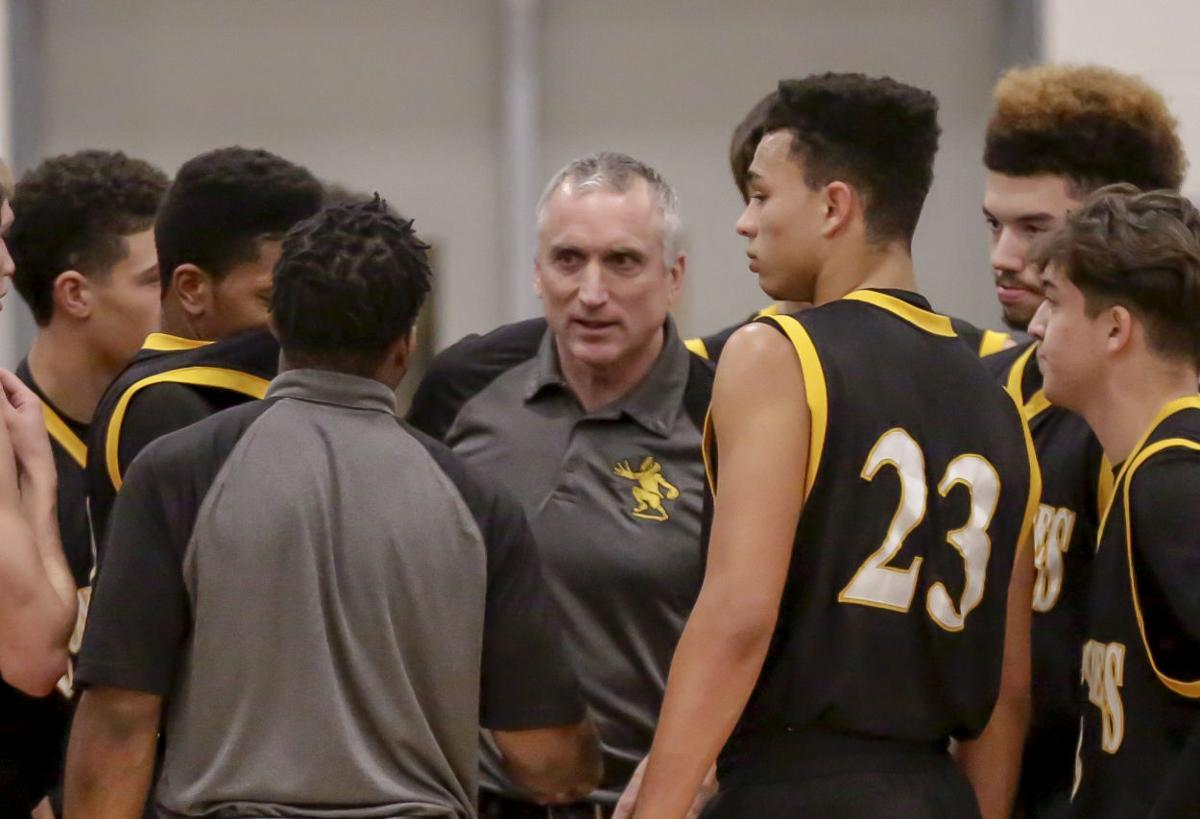 Cabrillo coach Gary West talks to his team during a timeout at the Los Padres League basketball game at Nipomo High School on Jan. 21. West, who just completed his 15th season as coach, resigned last Thursday. 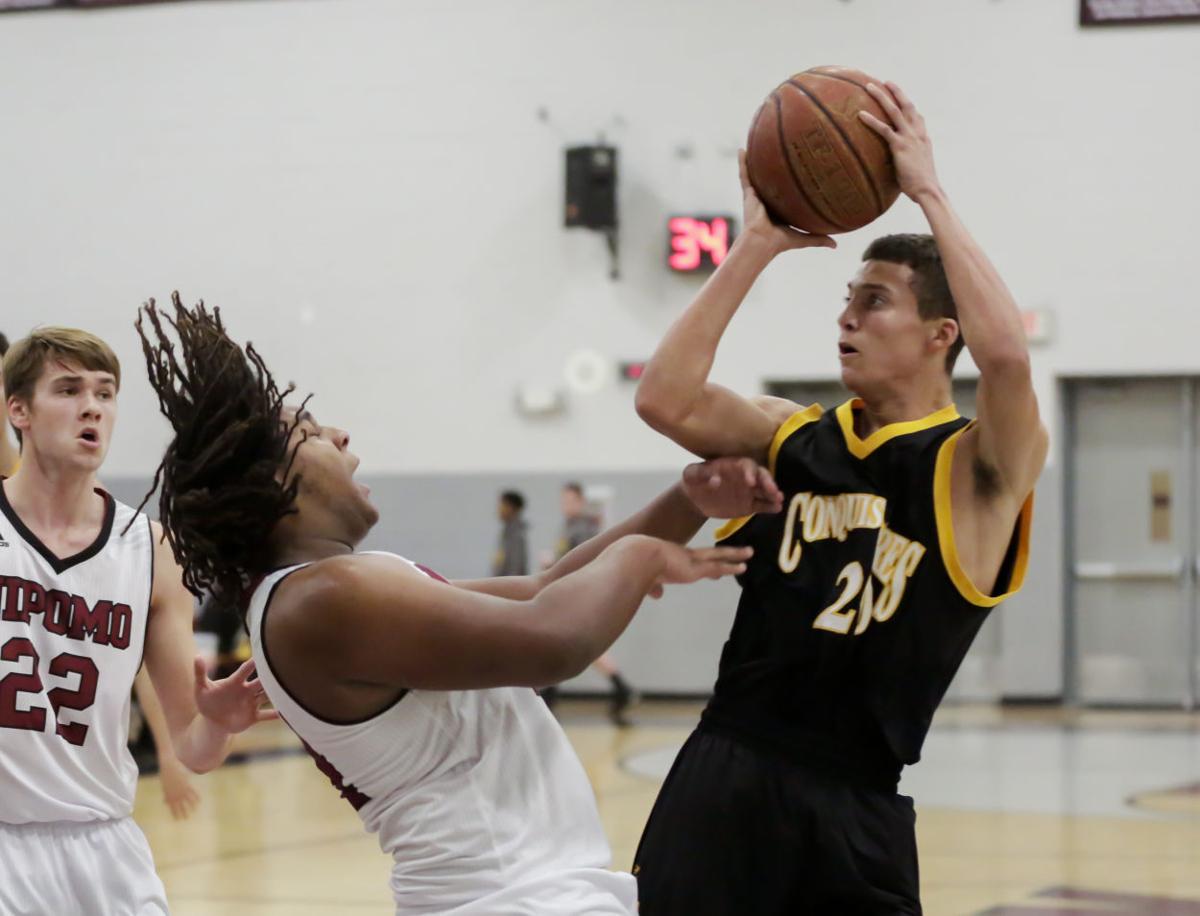 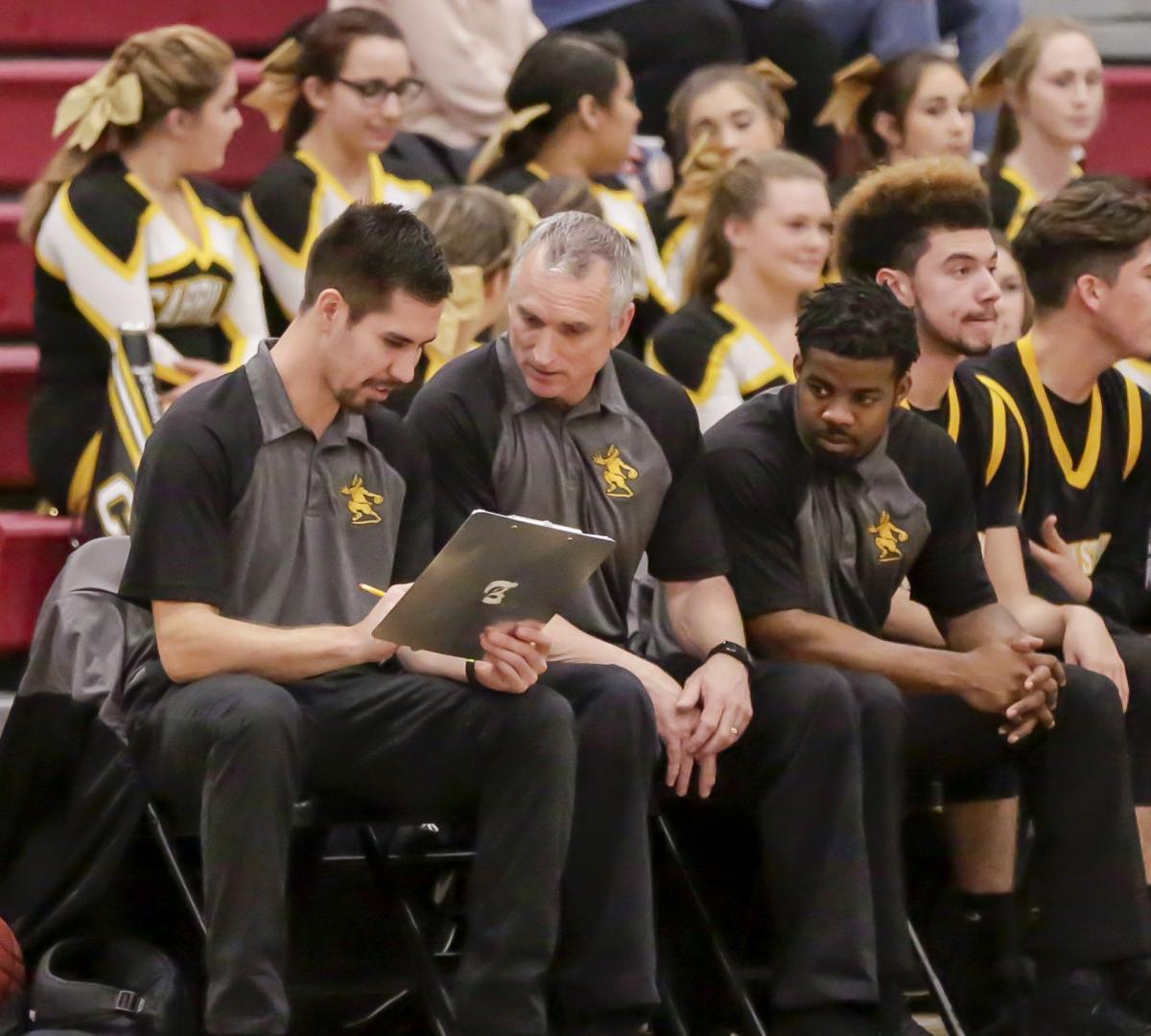 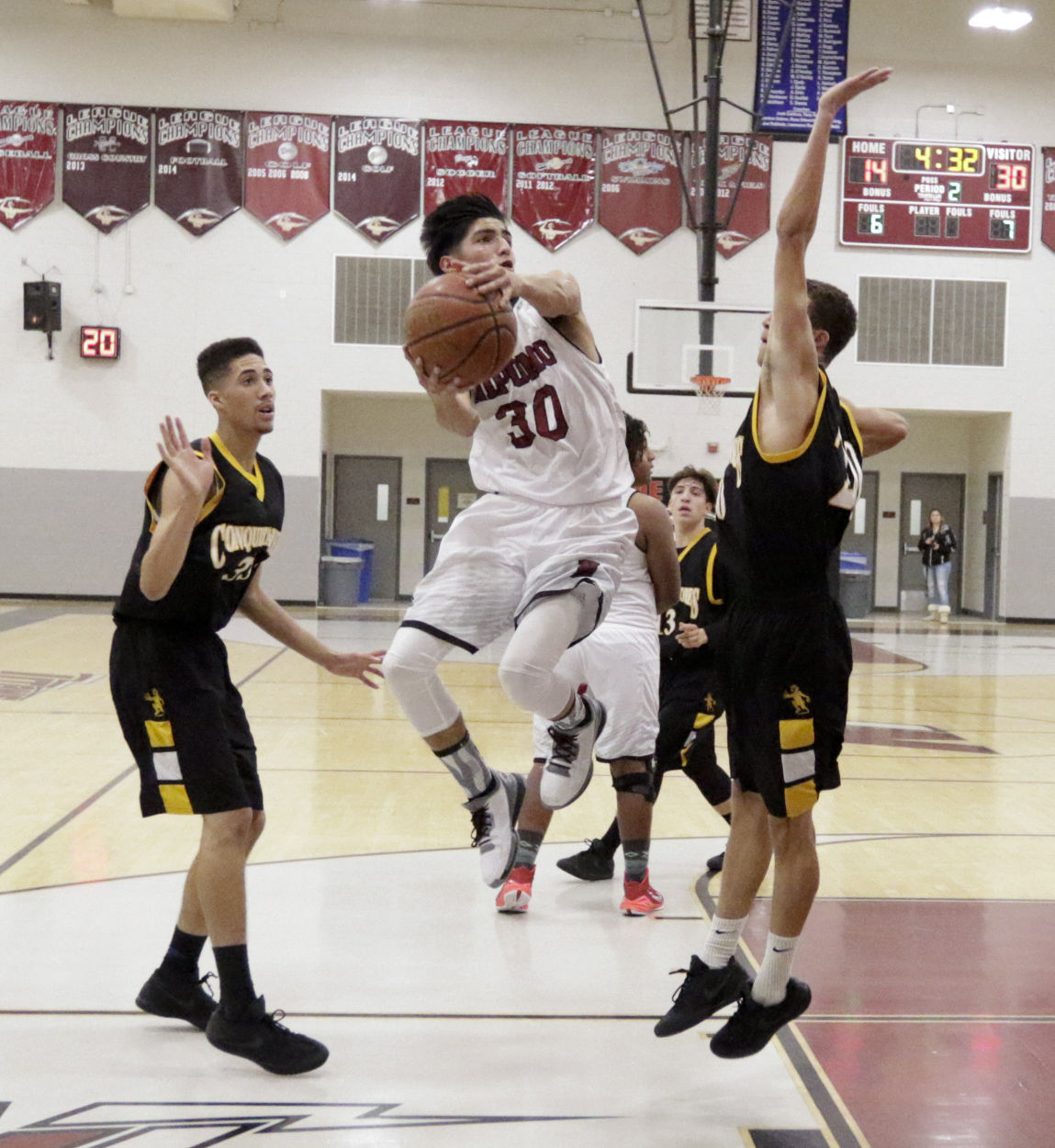 Nipomo's Mason Gallegos goes up for a shot against Cabrillo defenders during a Los Padres League game at Nipomo High School Jan 12. Gallegos was named to the All-Area Second Team after averaging 13.2 points per game. 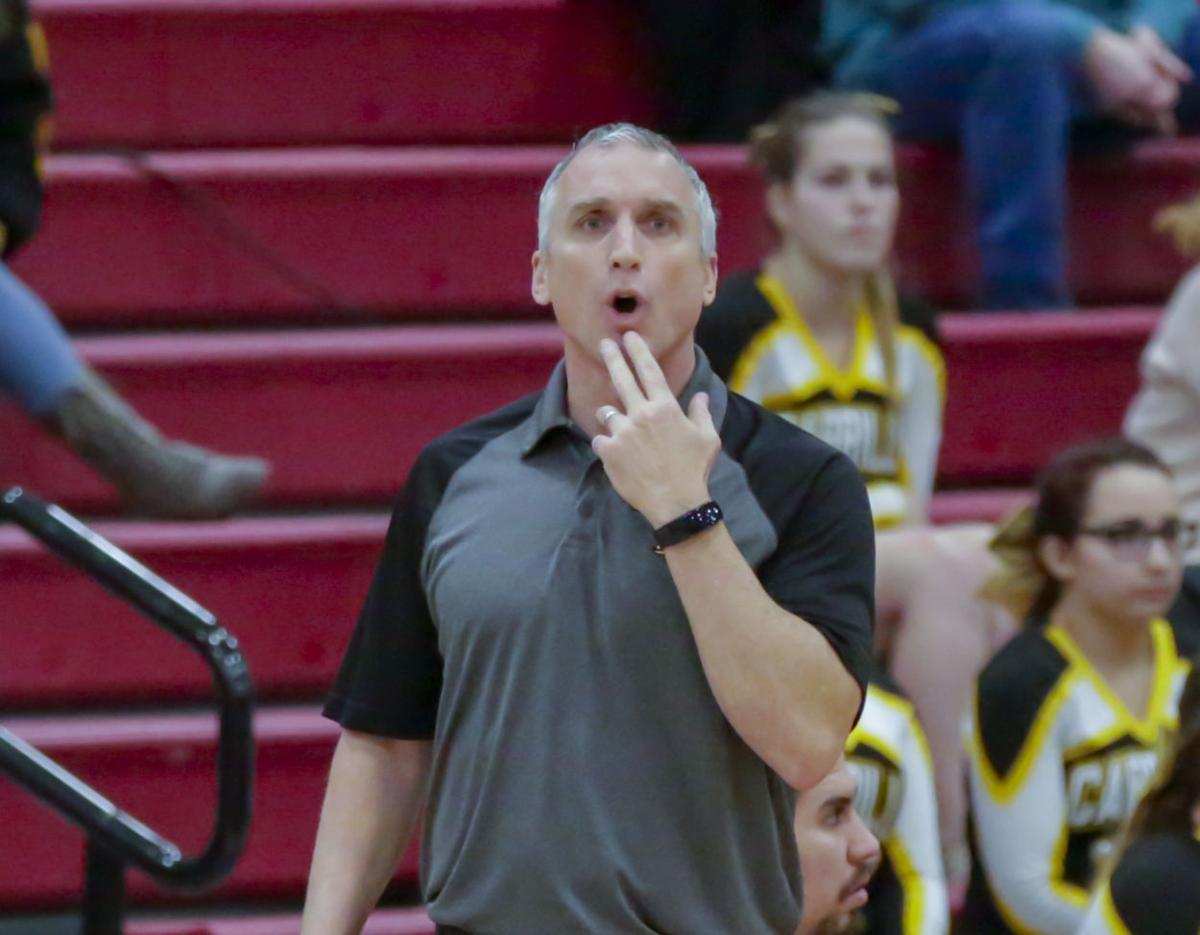 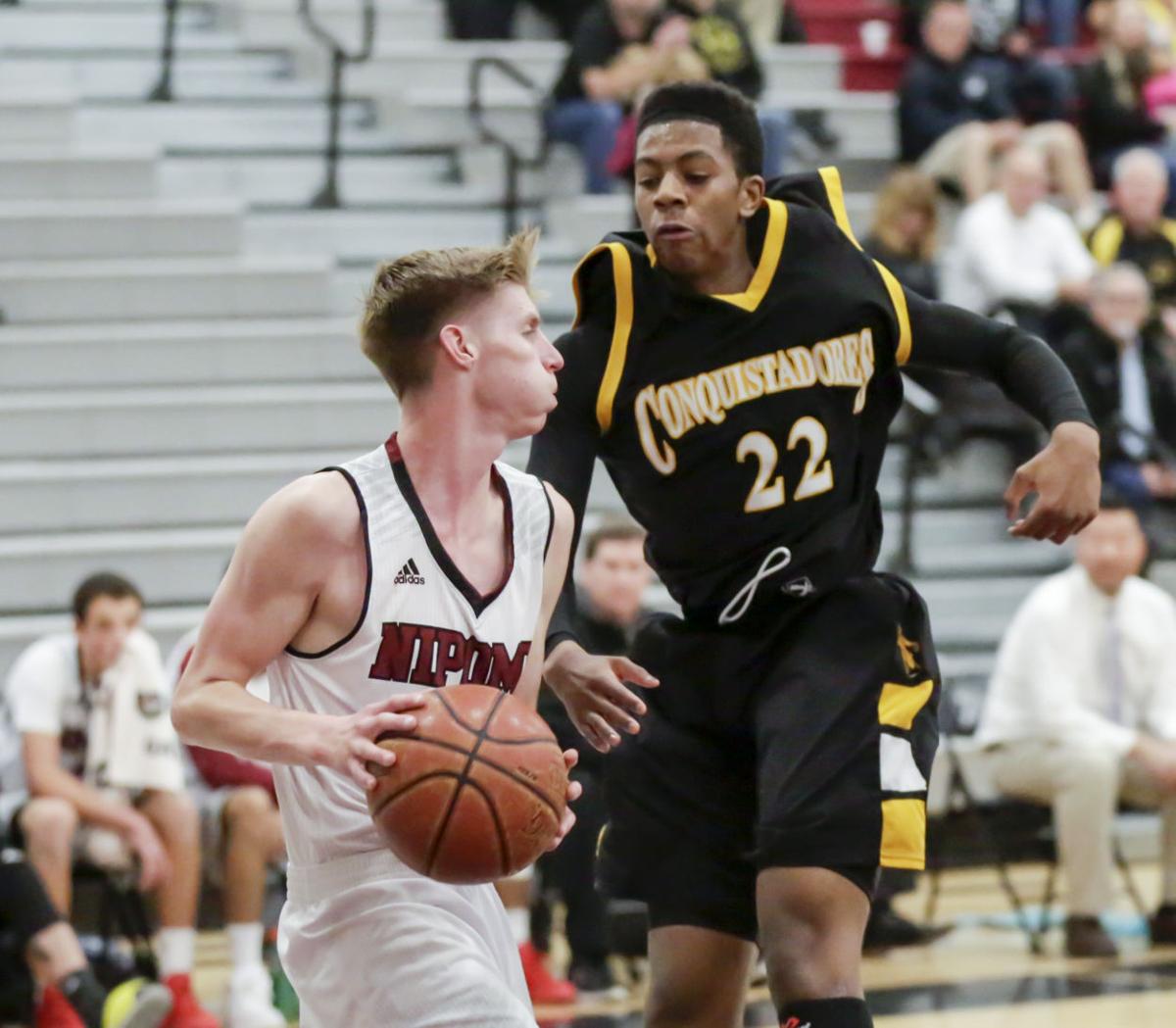 The dismissal of Gary West as Cabrillo's boys basketball coach did not last long, and West relished his return.

After the Lompoc Unified School District School Board fired West as Cabrillo's boys basketball coach earlier in the month, West was back on the sidelines coaching Thursday night and his team rolled to an 83-55 win at Nipomo to remain unbeaten in the LPL as the second half of league games began.

Shortly before game time, Cabrillo athletic director Dan Troup said West was reinstated earlier Thursday. Troup had no further comment. West remained as a counselor at Cabrillo after he had been dismissed as the boys basketball coach.

"I just got word," West replied when he was asked who informed him that he had been reinstated as the school's boys basketball coach. Assistants C.J. Simmons and Paul Carter took over as co-head coaches for the four games West was away.

"The game was secondary," West said afterward. "I just love being around these kids. I love them so much. I was at this game as a fan as much as I was as a coach."

Knight said, "We were so happy," when word spread among the players that West had returned as coach. "When we got on that bus (to go to the game), we knew we had our leader back."

West was in characteristic form, constantly exhorting his team and calling out instructions. He patted players on the back as they left the floor and walked over to Simmons for a celebratory hand clasp when reserve Jamie Baker sank a 3-pointer late in the game.

Cabrillo started with a turnover then Nipomo's Noah Gibbons scored inside for the first points of the game.

"I don't think we had a ragged start," said West. "Nipomo was sharp coming out. They have a good team. They played better than they did the first time we played them. They have the big kid (Gibbons) back, and he's a force inside."

The Conquistadores settled in after that. Their persistent full-court, full-out press forced turnovers, the Titans had difficulty getting anything past the 6-foot-6 Tyler in the first half and Cabrillo hit shots with regularity in building a 41-21 halftime lead.

Tyler scored 12 points in the first half. He was a big rebounding force, and he blocked six shots before intermission.

"That was one of the best halves Jordan played, but it does not surprise me," said West. "He's very capable."

The Conquistadores (8-0 LPL) won at home to start the second half of Los Padres League games.

Erin Jenkins poured in 28 points for Cabrillo. Jenna Daley had 12.

"The scoreboard made it look like the game wasn't as close as it really was," said Cabrillo coach Jared McCune.

"They really packed in their defense inside and were determined not to let us get second shots, and they did a good job of that," said Cabrillo's coach.

"Erin really pushed the ball up, and she got a lot of our points on fast breaks. Devan McCune, my daughter, did a good job of pushing the ball up and getting the ball to her."

Jared McCune said, "Their point guard, Kylie Mendez, is a great point guard. She must have had seven or eight assists."

The Conqs rebounded from a disappointing loss against Santa Maria to dominate the Titans 5-1 on Thursday at Nipomo High.

The Titans scored in the sixth minute and then the Conqs (9-5-2, 6-2-0 Los Padres League) wrested away control of the game and held it for most of the remaining 74 minutes. Cabrillo led 3-1 at halftime after two goals by Juan Trejo and one by Adonis Osua.

Trejo's second goal in the 27th minute was assisted by Jesus Mendoza. In the second half, Mendoza scored in the 41st minute off a pass by Adrian Calderon.

Calderon scored unassisted in the 57th minute on a run up the middle of the field.

Baca said the Conqs looked like a different team from the group that lost 2-1to Santa Maria on Tuesday in a game for second place behind Santa Ynez. Baca said the team talked in Wednesday's practice about being accountable to each other working hard.

"Tonight we worked on pressing the ball defensively and pushing the ball on offense," he said. "It worked. Other than one bad goal, we pretty much controlled the game. We were a little more physical to the ball."

Cabrillo coach Gary West talks to his team during a timeout at the Los Padres League basketball game at Nipomo High School on Jan. 21. West, who just completed his 15th season as coach, resigned last Thursday.

Nipomo's Mason Gallegos goes up for a shot against Cabrillo defenders during a Los Padres League game at Nipomo High School Jan 12. Gallegos was named to the All-Area Second Team after averaging 13.2 points per game.