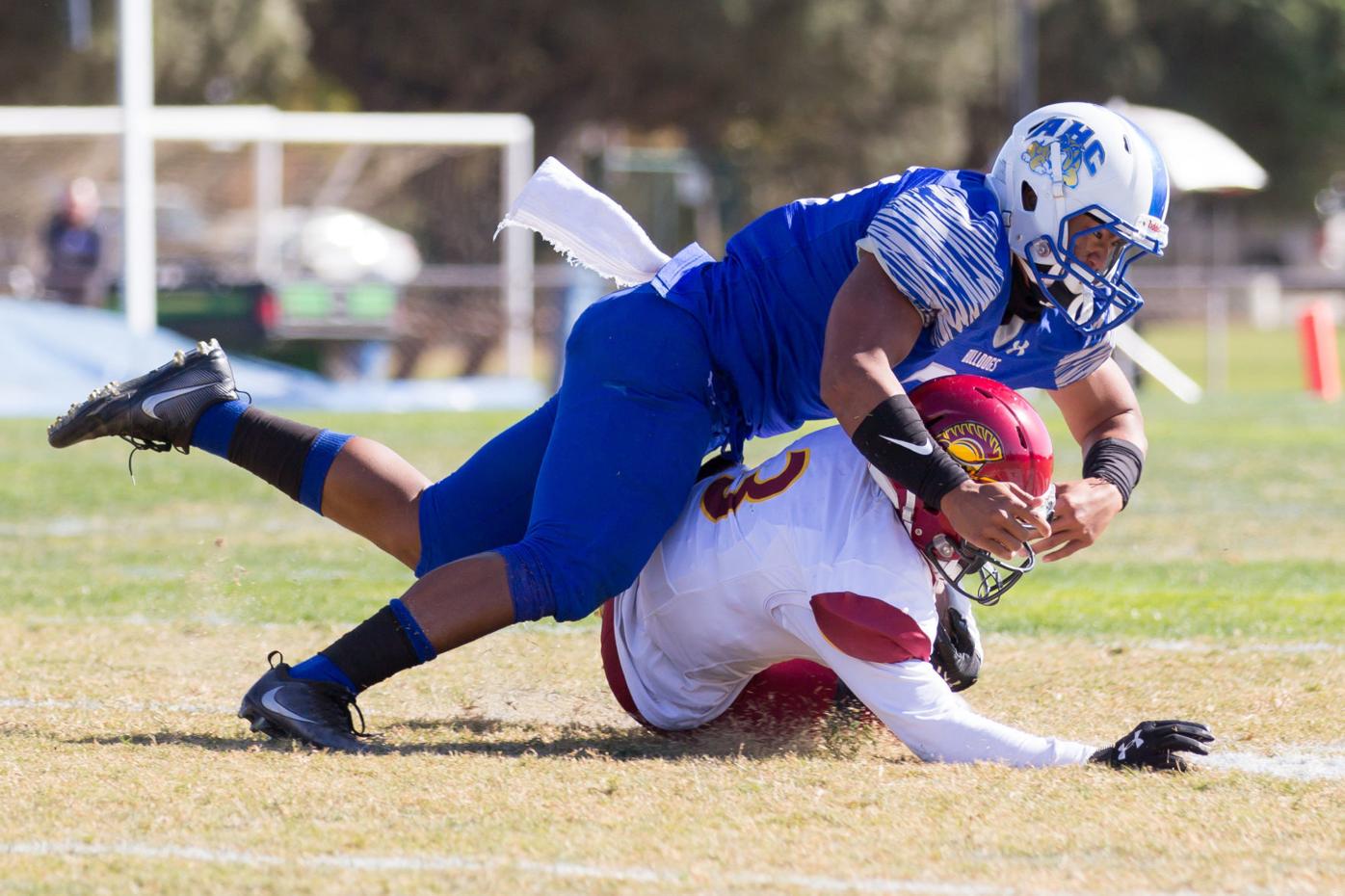 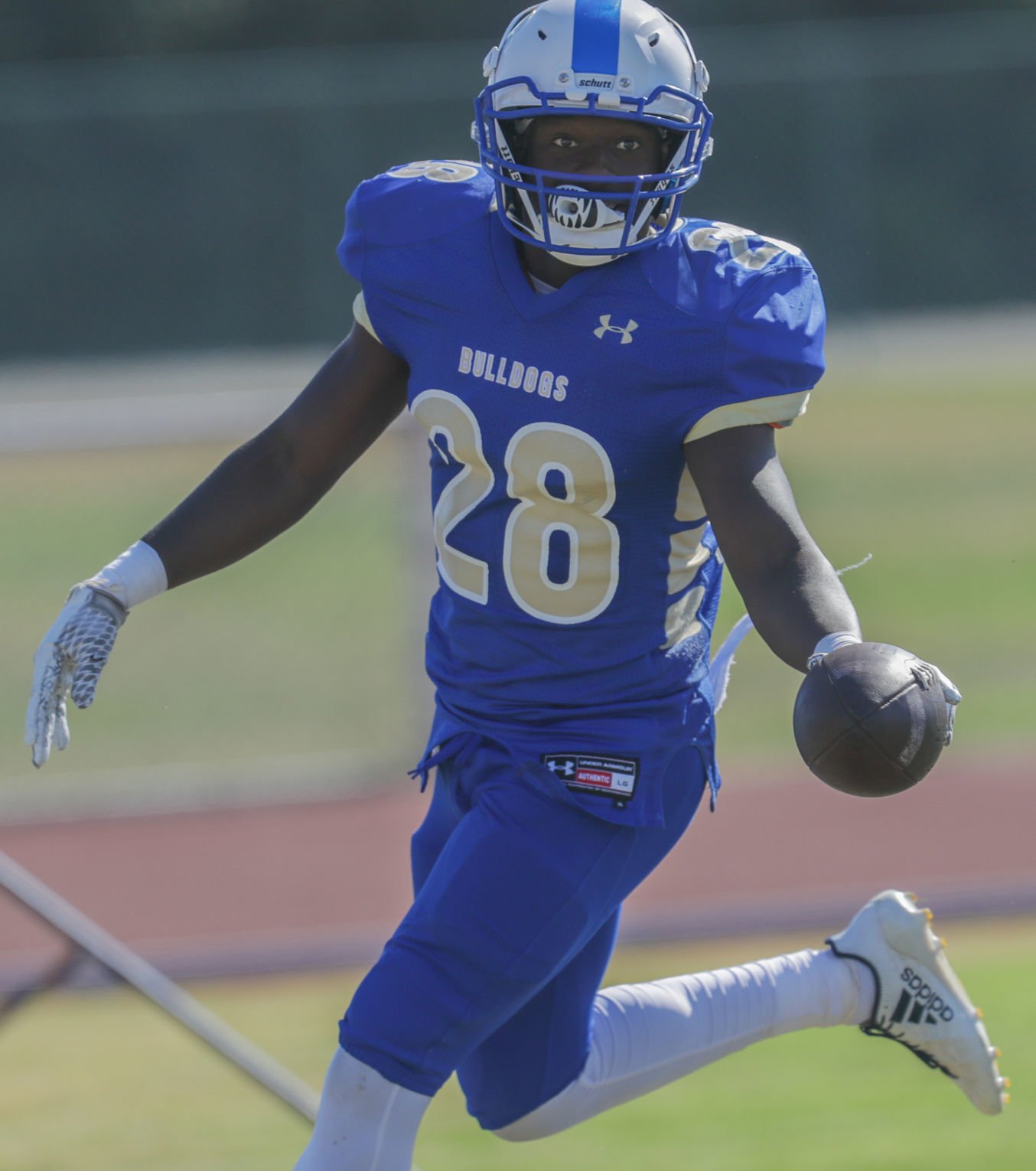 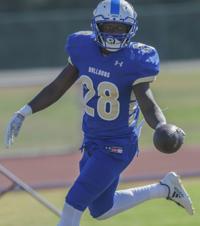 Jaquez McWilliams glides into the end zone against West LA for one of Hancock College's 10 touchdowns in the Bulldogs' 70-20 win in a game in September of 2019. McWilliams and the Bulldogs returned to the field for the first time since the 2019 season, with McWilliams registering an interception in the 17-14 overtime win over Santa Barbara. 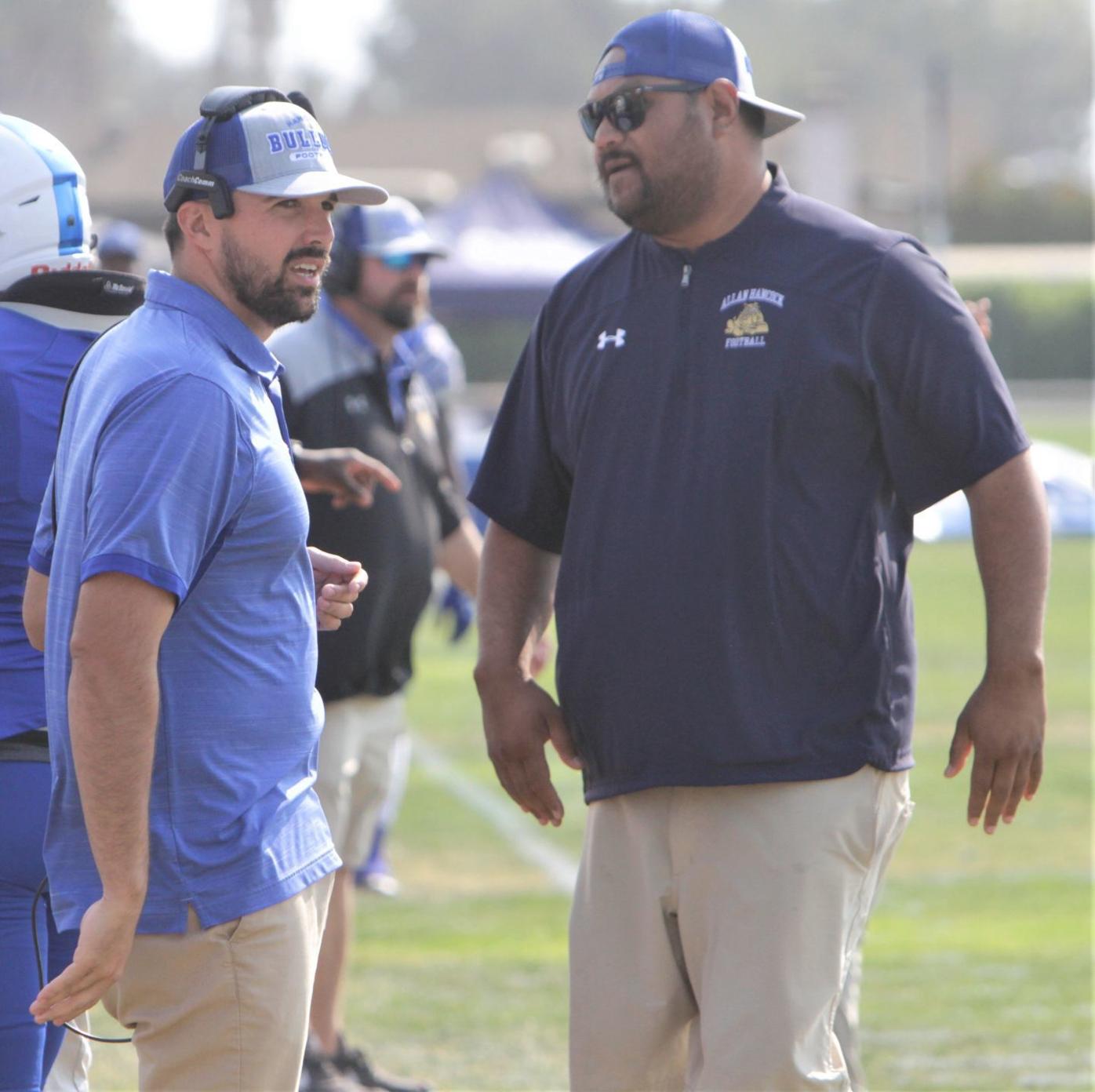 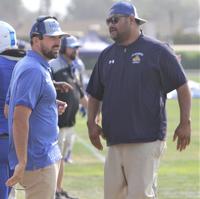 Jaquez McWilliams glides into the end zone against West LA for one of Hancock College's 10 touchdowns in the Bulldogs' 70-20 win in a game in September of 2019. McWilliams and the Bulldogs returned to the field for the first time since the 2019 season, with McWilliams registering an interception in the 17-14 overtime win over Santa Barbara.

Seth Damron took over the head coaching position at Hancock College in April of 2020.

He had to wait nearly 18 months to coach his first game with the Bulldogs. He didn't have to wait too much longer to get his first win.

Theaker's kick was good from 37 yards out at Hancock Field. Saturday's home event marked the first football game played on the AHC campus in 665 days, per the school.

The Bulldogs hold an overall series advantage against Santa Barbara of 33-22-1, dating back to 1956. Hancock has won four straight over the Vaqueros.

The two teams combined for five punts, one fumble and a turnover on downs in the first quarter. Hancock found the end zone with 11 minutes remaining in the second quarter on a 25-yard scamper from Christian Erickson, a Paso Robles grad who also spent time at Sacramento State.

The Bulldogs doubled their advantage five minutes later when Maurice Smith ran 32 yards for a score to give Hancock a 14-0 lead at the break.

The Vaqueros cut the difference on their opening drive of the second half while taking six minutes off the clock. The score came after a wild series that saw a 59-yard SBCC completion, a forced fumble by Ronald Fuselier near the end zone and a recovery by a Vaquero to secure the touchdown.

Both teams were scoreless through the remainder of the third quarter, but Santa Barbara was able to knot the score early in the fourth quarter with a 6-yard run.

SBCC nearly scored again after a penalty gave the Vaqueros a first down and placed them on Hancock's 16-yard line, but Loto Manogiman gave the Bulldogs the ball back by forcing and recovering a fumble.

Hancock marched down the field after the recovery in a 16-play drive that spanned nearly nine minutes but was unable to put points on the board before time ran out.

Teams entered overtime tied 14-14, as the Bulldogs took the first possession on the 25-yard line.

A pair of Hancock penalties backed the Bulldogs up 15 yards, but an 18-yard completion from Esekielu Storer to Jaleel Walker gave them manageable field position.

A two-yard rush from Smith put the ball on the 20-yard line, which led to the field goal attempt for Theaker. With its possession, Santa Barbara took the field before a forced fumble by LJ Vongsy, which was recovered by Hancock's Adreian Stevenson, secured the victory.

For the offense, Smith led the ground game for the Bulldogs with 115 rushing yards (6.8 per carry) and one touchdown while Erickson and Zidane Thomas each recorded just over 40 rushing yards. Mark Rodriguez, a freshman from Mission Prep, earned the start at quarterback for Hancock but was forced to exit early after an injury. He completed 1-of-3 attempts for six yards before his exit.

Storer, who entered to replace Rodriguez, went 4-for-8 and totaled 62 passing yards. Walker led the group of wide receivers with 54 yards on two catches. Syre' Lewis led a trio of kickoff returners with a 21-yard run, followed by Smith's 18-yard attempt and BJ Jordan's 15-yard sprint.

On the defensive side, Vongsy and Jesse Garza led the Bulldogs with nine tackles apiece. Stevenson, John Sniffen and Andrew Lauritzen, who each registered one sack, combined to force a total yardage loss of 16 yards. Jaquez McWilliams secured the lone interception of the game for either squad in the second quarter, which halted a 14-play trek for Santa Barbara.

Theaker finished the contest with a perfect 2-for-2 showing on PATs and was 1-for-2 on field goal attempts. He also racked up 188 kicking yards off the tee and averaged 42.8 yards per punt on four attempts.

Penalties plagued both squads as the two teams combined for 28 flags that led to a total loss of 214 yards. SBCC recorded 188 yards through the air while the Bulldogs notched 170 yards on the ground.

Both teams registered three sacks apiece and each side fumbled five times in the contest. Hancock has now defeated SBCC in 6 of their last 10 meetings.

The Bulldogs are set for a visit to San Bernardino Valley on Saturday, with a 6 p.m. kickoff.

The Bulldogs did not play a game in 2020 after canceling the season amid the coronavirus pandemic.