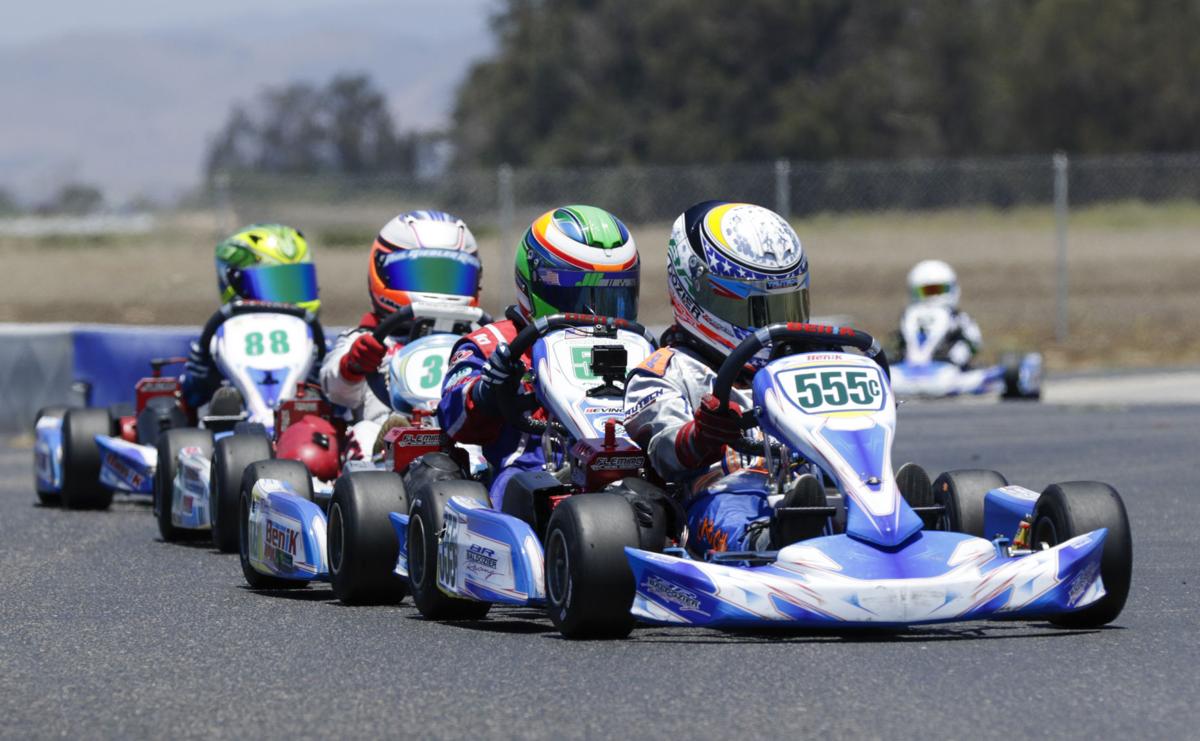 The leaders in the Junior Comer Light Pre-Main race head to the checkered flag Friday during the International Karting Federation 2-Cycle National Championships at the Santa Maria Airport. 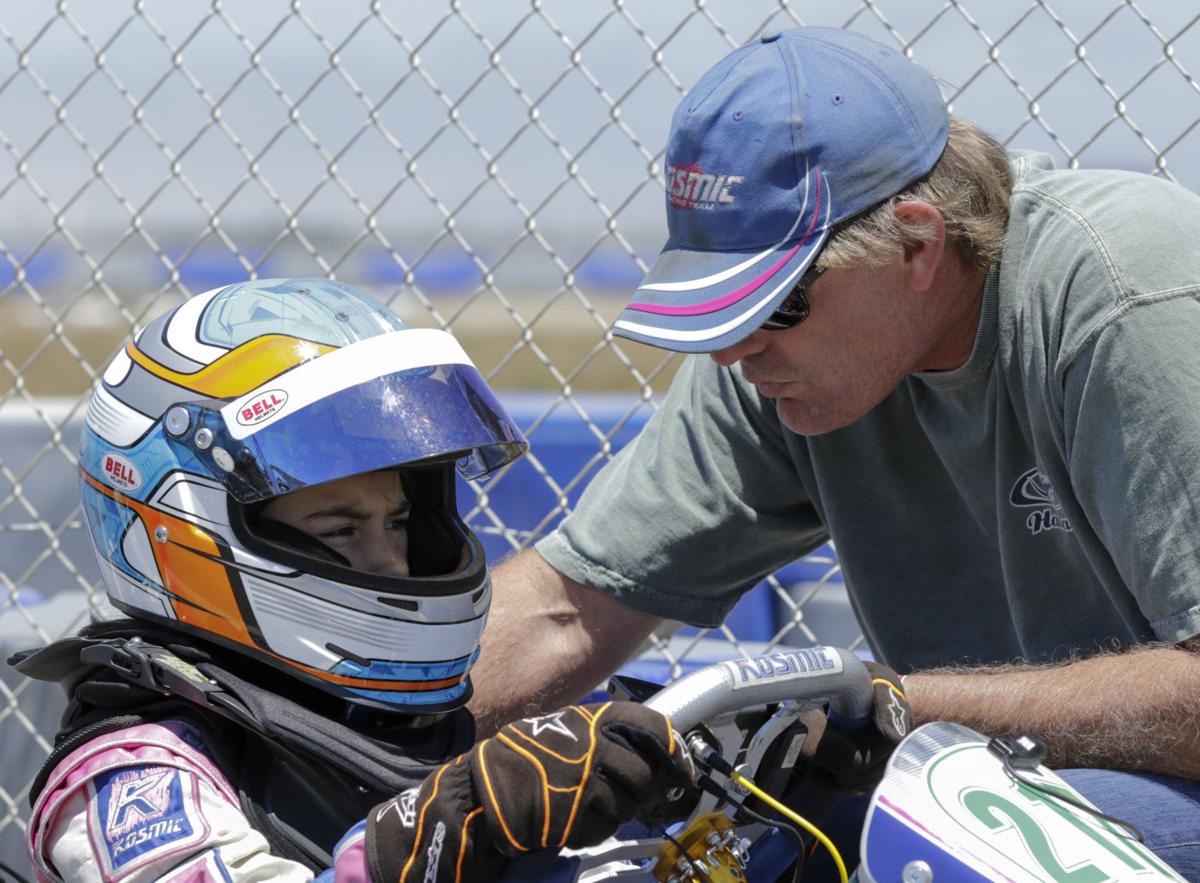 Orrin Jensen, right, of Solvang, talks with his daughter Juliette, 10, Friday during qualifying for the International Karting Federation 2-Cycle National Championships at the Santa Maria Airport. 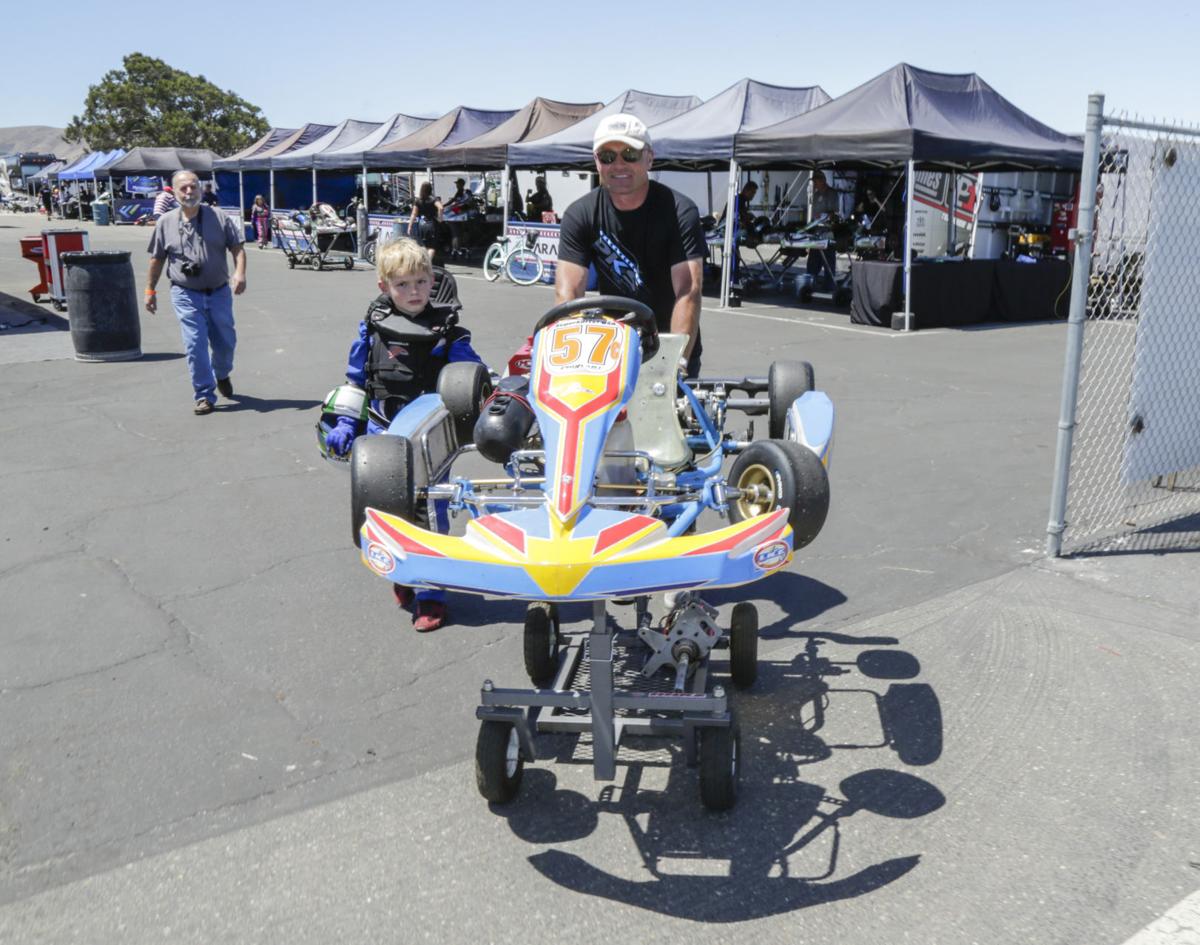 Michael Toke, right, of San Luis Obispo, and his son Logan, 8, move to the starting area Friday during the International Karting Federation 2-Cycle National Championships at the Santa Maria Airport.

Santa Maria is home to one of those champions – Pioneer Valley High School graduate Chance Skaufel, 17, won his third “Duffy” with a wire-to-wire win in the KPV 4 Heavy class.

But the most exciting race of the day belonged to the Mini Swift class for 8 to 10-year old racers.

Dominic Gorden edged Carson Morgan by less than a nose – just one-hundredth of a second separated the racers as they roared side-by-side across the finish line.

Gorden, who came over with his family from Clovis, is a seasoned veteran, with six years of racing under his belt. With all those years on the circuit, it’s hard to believe he is just 10-years-old.

“I got a really good start to the race,” said Gorden. “I had the lead but I knew someone was right behind me all the way.”

Gorden and Morgan quickly opened a 5-second gap on the field in the 20 lap championship final.

The two raced inches apart the whole way as Morgan looked for a chance to move into the lead.

“He passed me about halfway through the race,” said Gorden. “I pushed him for a while before I got the chance to get back into the lead.”

With about five laps to go, Gorden got the lead back, but one lap later Morgan re-took the lead.

“Then I finally passed him coming out of the final hairpin turn on the final lap and held him off the rest of the way. I think we were less than a bumper apart.”

The cars are equipped with computer chips that give an exact time for each racer.

Bryce Stevens was hot on his heels the whole way, finishing fourth just under four-tenths of a second behind Cole Morgan.

Gorden is heading home with the third Duffy of his career – and maybe fourth if he can win again Saturday.

Skaufel’s KPV 4 Heavy victory was the exact opposite.

The soon-to-be freshman at Hancock College went wire-to-wire all day – in qualifying, the pre-main event and the championship finals.

His margin of victory was nearly 31 seconds.

Skaufel ran away from the field right from the start. He kept his foot to the floor, never easing off throughout the 20 lap final.

“I just drive,” said Skaufel. “I just put the pedal down and go as fast as I can.”

Duffy not only won his third Duffy, he also won his fourth “Screaming Eagle”, the prestigious award that goes to the fastest qualifier in each division.

His longtime friend and on-track rival, St. Joseph High grad and also a Hancock College student Kyle Blum was injured in a crash during Thursday’s practice session. Blum tried to make it through qualifying but was in too much discomfort and pulled his racer back to the pits.

“My car was on the rails after qualifying,” said Blum of the carriage the Karts are put on before and after each race. “Tomorrow’s another day.”

Blum will try to get back in action during Saturday’s racing.

Cole Morgan is bringing home a Duffy even if it isn't in the Mini Swift class.

He took the lead early in the Junior 1 Comer Light class and held it through the end for a seven second victory over Cole Cotham. Solvang’s Juliette Jensen finished third.

A pair of Logan’s battled it out in the Kid Kart Honda class for racers who are 5 to 7-years-old.

Logan Ainsworth won the Duffy with a three-second margin of victory over Logan Chambers.

Gary Lyles was the winner of the Tag Junior X30 Heavy class for racers ages 12-15.

He pulled away midway through the race for a 7-second victory over Alex Siragusa.

Cooper Hicks had a comfortable 12-second lead over Logan Toke when he crossed the finish line to capture the Micro Swift championship for 11 to 15-year-old racers in the day’s final race.

And there’s still another full day of the IFK Grand Nationals on deck.

Another half dozen champions will be crowned Saturday.

Practice begins at 8 a.m. followed by qualifying around 11.

The 12 lap pre-main heats start around 1 p.m. with the 20-lap championship main events kicking off about 3 p.m.

There will be a food truck on site from 8 a.m. until the end of the day.

Admission is $15 and covers a pit pass so spectators can meet the racers.

Andy Guyader has been Cabrillo's football coach for months. He still hasn't been able to meet his players in person.

Amid the coronavirus pandemic, Guyader has been forced to make all his first-year preparations in the digital world. He's developed video workout programs to help kids stay in shape and asked players to show their progress by submitting videos or photos of what they've been working on, with all communication taking place on Zoom or other digital services.

The leaders in the Junior Comer Light Pre-Main race head to the checkered flag Friday during the International Karting Federation 2-Cycle National Championships at the Santa Maria Airport.

Orrin Jensen, right, of Solvang, talks with his daughter Juliette, 10, Friday during qualifying for the International Karting Federation 2-Cycle National Championships at the Santa Maria Airport.

Michael Toke, right, of San Luis Obispo, and his son Logan, 8, move to the starting area Friday during the International Karting Federation 2-Cycle National Championships at the Santa Maria Airport.