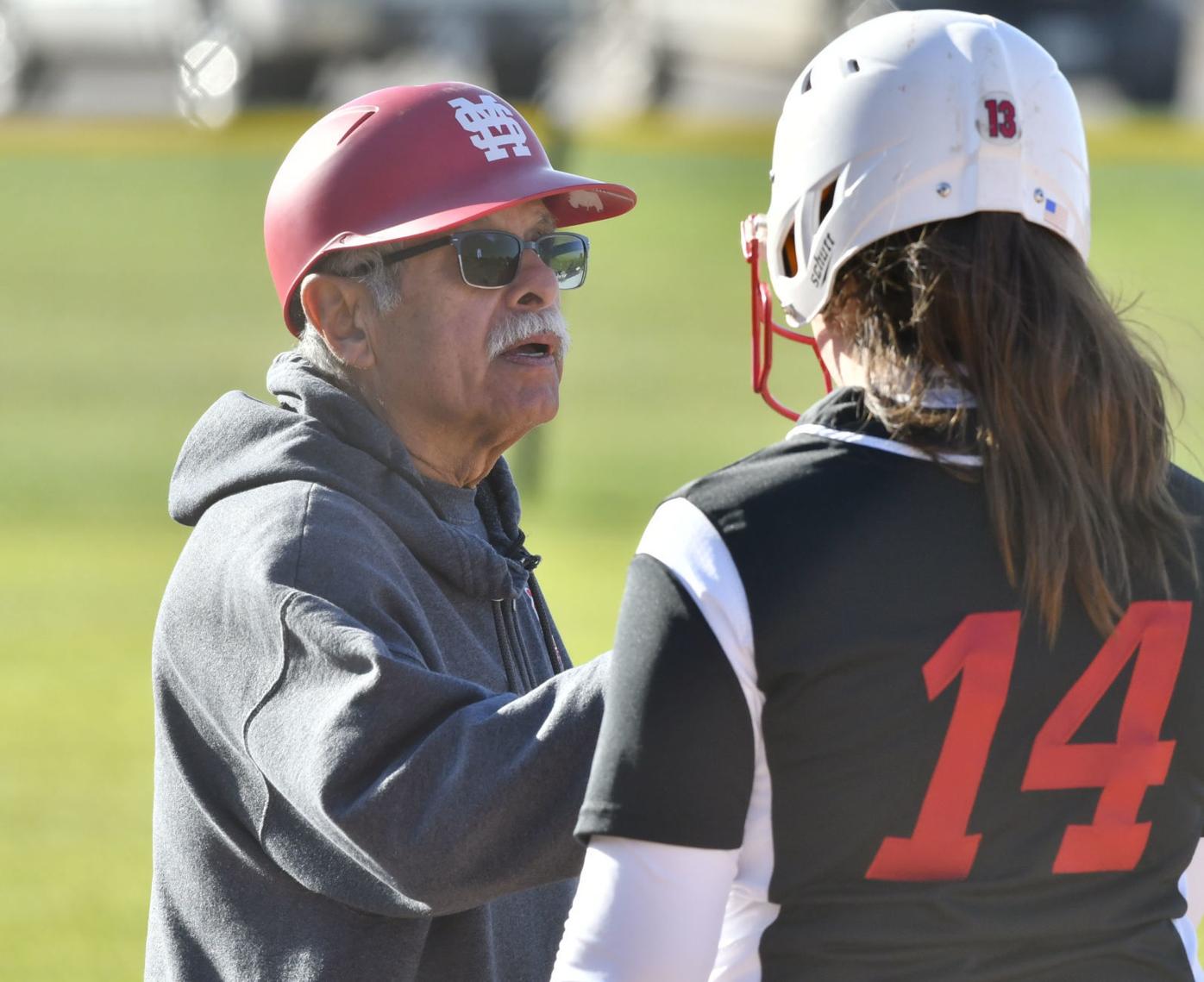 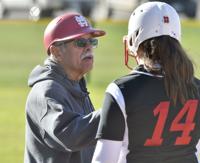 Greg Guerrero coached his Santa Maria softball team to a 16-6 win over Bakersfield in the first round of the playoffs on Tuesday. 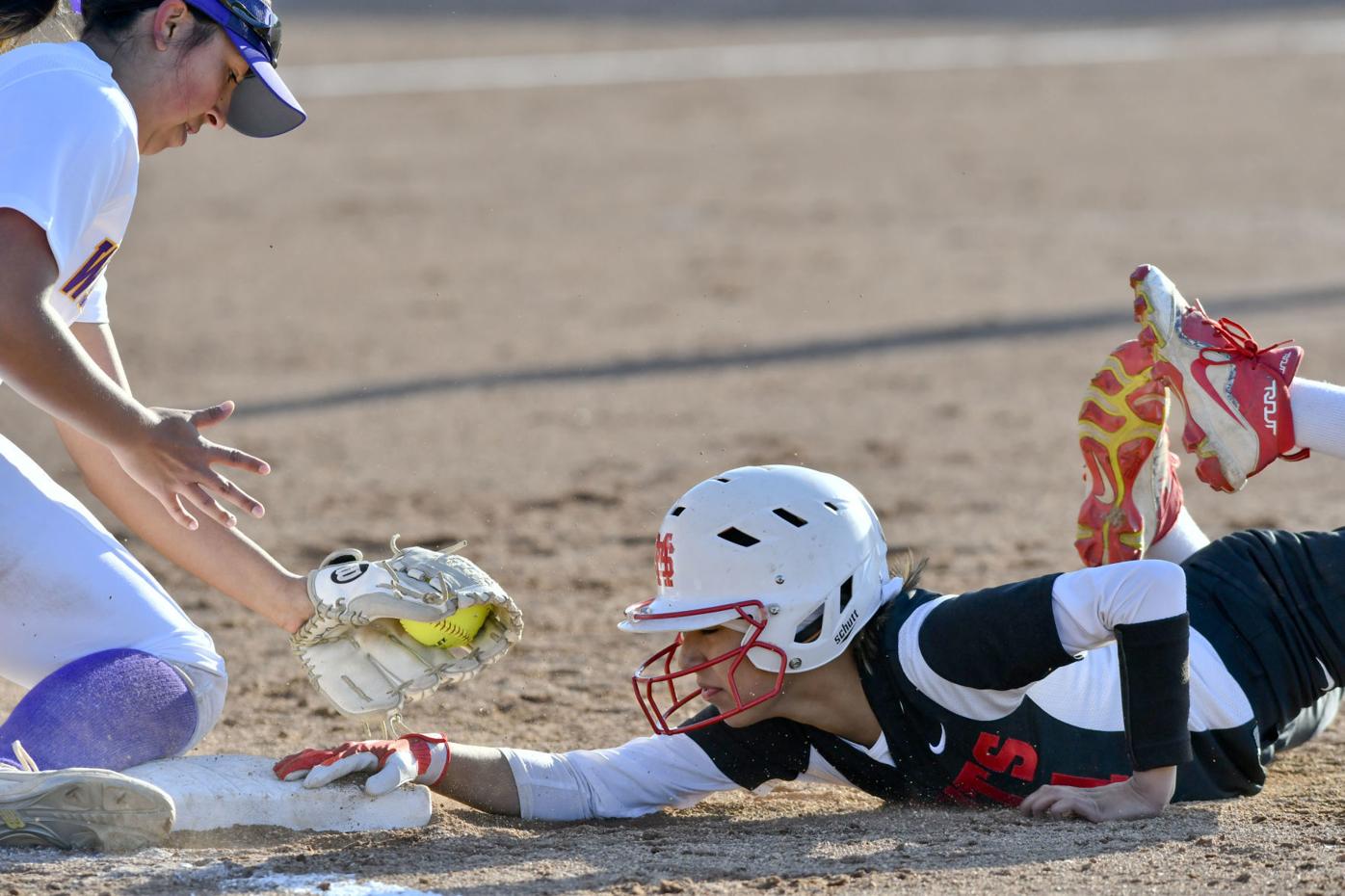 Santa Maria's Christina Regalado dives back to first safely ahead of the pickoff throw to Righetti's Sam Lopez during a 2019 game.

Greg Guerrero coached his Santa Maria softball team to a 16-6 win over Bakersfield in the first round of the playoffs on Tuesday.

Santa Maria's Christina Regalado dives back to first safely ahead of the pickoff throw to Righetti's Sam Lopez during a 2019 game.

With a 16-5 win over Bakersfield Tuesday, Santa Maria's softball team advanced to the quarterfinals of the CIF Central Section Division 4 playoffs.

The Saints will be play Fowler, the No. 1 seed. Or, they think they'll play Fowler.

As of Wednesday afternoon, Santa Maria coach Greg Guerrero said the school was still trying to find an agreeable date to play the top-seeded Redcats.

The game was originally scheduled for Thursday. But Fowler has its graduation that day and will not play on the date. Santa Maria then has its graduation on Friday. Guerrero said neither school wants to play on Saturday due to end-of-year celebrations. He added that the Saints offered to play Monday, but Fowler turned that down not wanting to play in a possible semifinal the following day.

VOTE: Athlete of the Week nominees showed out in the playoffs

Guerrero then said that the CIF Central Section agreed to move the semifinal to Wednesday and Fowler had still not agreed to a Monday quarterfinal game against the Saints.

"If we can't agree on the day we're going to play, we're going to have to forfeit," Guerrero said. "We can't play Friday since our seniors graduate and there will be celebrations going on on Saturday. We tried to set it up for Monday and CIF OK'd it. They are not responding in kind. Fowler does not want to play us on a Monday since the semifinals are on Tuesday. CIF is willing to move the next game over to Wednesday.

"Right now, they're not cooperating, in my mind. That might get me in to trouble, but who cares at this point. We have six seniors on our team and we don't want to take anything away from them, especially a chance of progressing in the playoffs."

Guerrero added: "We're still fighting it and still trying to get it done. Hopefully Fowler will meet us halfway since we're traveling. We have to do all the traveling since they're the No. 1 team. We haven't been able to agree on a day to play the game."

Fowler is a small community of about 6,000 just southeast of Fresno.local

Santa Maria, the No. 8 seed, advanced to the quarterfinals after that win over Bakersfield, the No. 9 seed. The Saints, now 10-11 on the season, were down 6-3 at one point and then scored 13 runs to eventually score a run-rule win over the Lady Drillers.

Guerrero said the Saints batted around twice in the bottom of the fourth inning as every Saint in the lineup recorded a hit.

"It's been our M.O. all year. We rally late and we don't give up," Guerrero said. "We fight harder toward the end of games. The girls got energized again and motivated. They started hitting the ball well and running the bases well and scoring a bunch of runs."

CIF wins have been rare for the Santa Maria softball program and home wins even more so.

"This group, I couldn't be more proud of them," Guerrero said. "Santa Maria doesn't get too many CIF home games or CIF games period. I'm proud of our six seniors and this entire team. They didn't give up and they fought and it turned out in our favor."

Now the Saints will wait to find out if or when they'll play in the quarterfinals.

"This isn't due to us." Guerrero said of the scheduling conflict with Fowler. "We'll go any place and play."

Fowler is 20-1 on the season. The Redcats had a first-round bye Tuesday. They have out-scored their opponents 272-33 on the season and have won 15 straight games.

VOTE: Athlete of the Week nominees showed out in the playoffs

Larsh went 2-for-5 with two runs and three RBIs in the win over Faith Baptist on Saturday.

On Thursday, Larsh went 3-for-5 with three runs and two RBIs with two homers in the 10-2 win over St. Genevieve.

Padhal scored 15 of her game high 20 points before halftime in the win over West Bakersfield in the quarterfinals last week.

Tefera, a sophomore, had 10 points in the fourth quarter and finished with 16 to help St. Joseph fend off Lemoore in the quarterfinals as the Knights won 79-63.

Velasquez has been one of the Saints' top defenders during their playoff run and helped the team keep a clean sheet in their shootout loss to St. Bonaventure in the semifinals of the SoCal Regional playoffs. The Saints shut out the Seraphs in that game and in the 3-0 win over Gardena last week.

Sosa scored 18 points and hit four 3-pointers in the Titans' 72-49 win over Garces in the playoffs.

Rodriguez scored a 79 to help St. Joseph finish as runner-up at the CIF Central Section Division 2 finals in Lemoore.

Bazunga had 26 points and 11 rebounds in the Knights' wild 87-83 win over Clovis West in the semifinals of the CIF Central Section Open Division playoffs.

He also had the game-sealing steal and dunk. The Knights play at Fresno San Joaquin Memorial on Friday.

Canley has been nominated almost every week, but he's been too good in football and now track not to be nominated again.

He set another PR in the 100-meter dash with a time of 10.71, qualifying second in the CIF-SS D3 finals. He also helped the Braves set a PR in the 4x100 relay and qualify third.

VOTE FOR ATHLETE OF THE WEEK (VOTE ON ALL THREE SITES)

Righetti, Nipomo, St. Joseph and Orcutt Academy are all one win away from claiming their first Central Section championships.