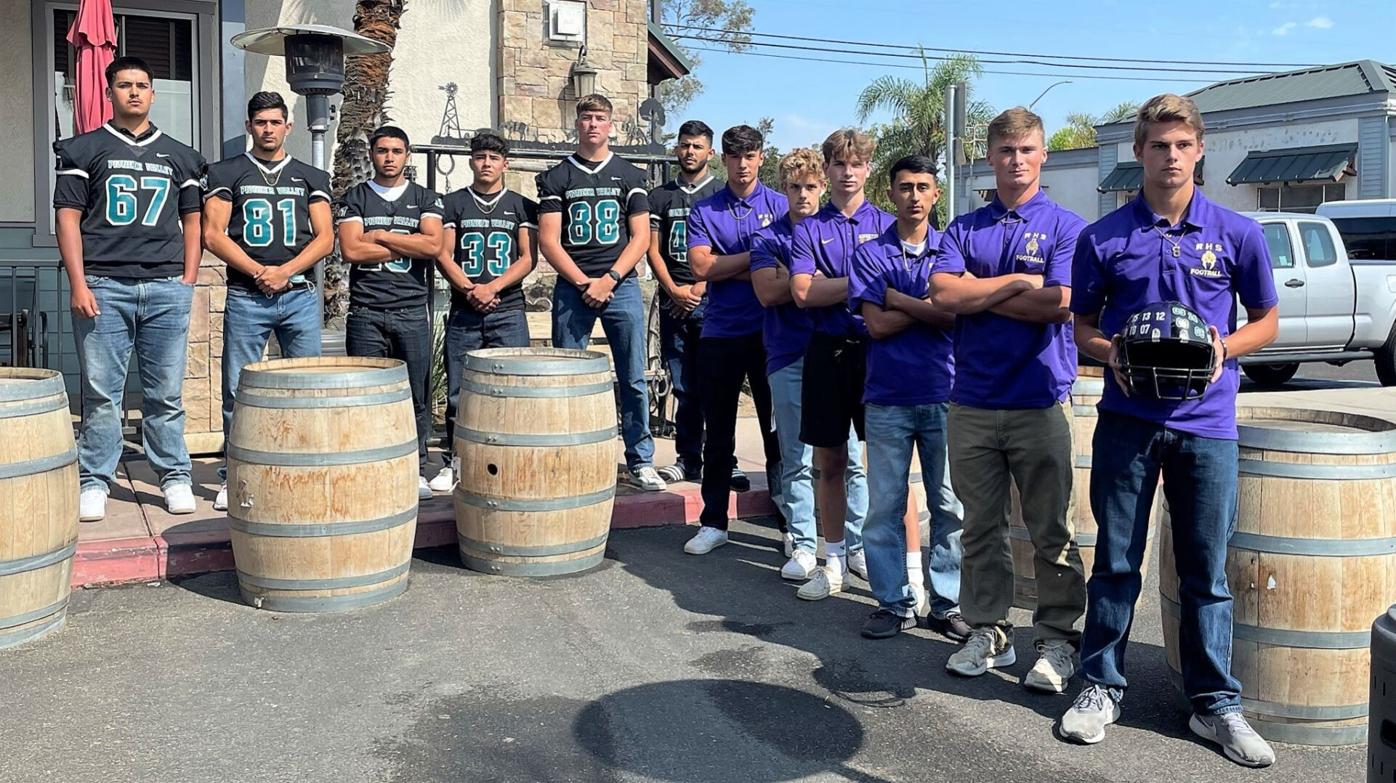 Players from the Pioneer Valley and Righetti football teams met at Cool Hand Luke's in Santa Maria for a pre-game meal Wednesday. Righetti hosts Pioneer Valley in the annual rivalry game known as the 'Battle for the Helmet' Friday night at 7 p.m. 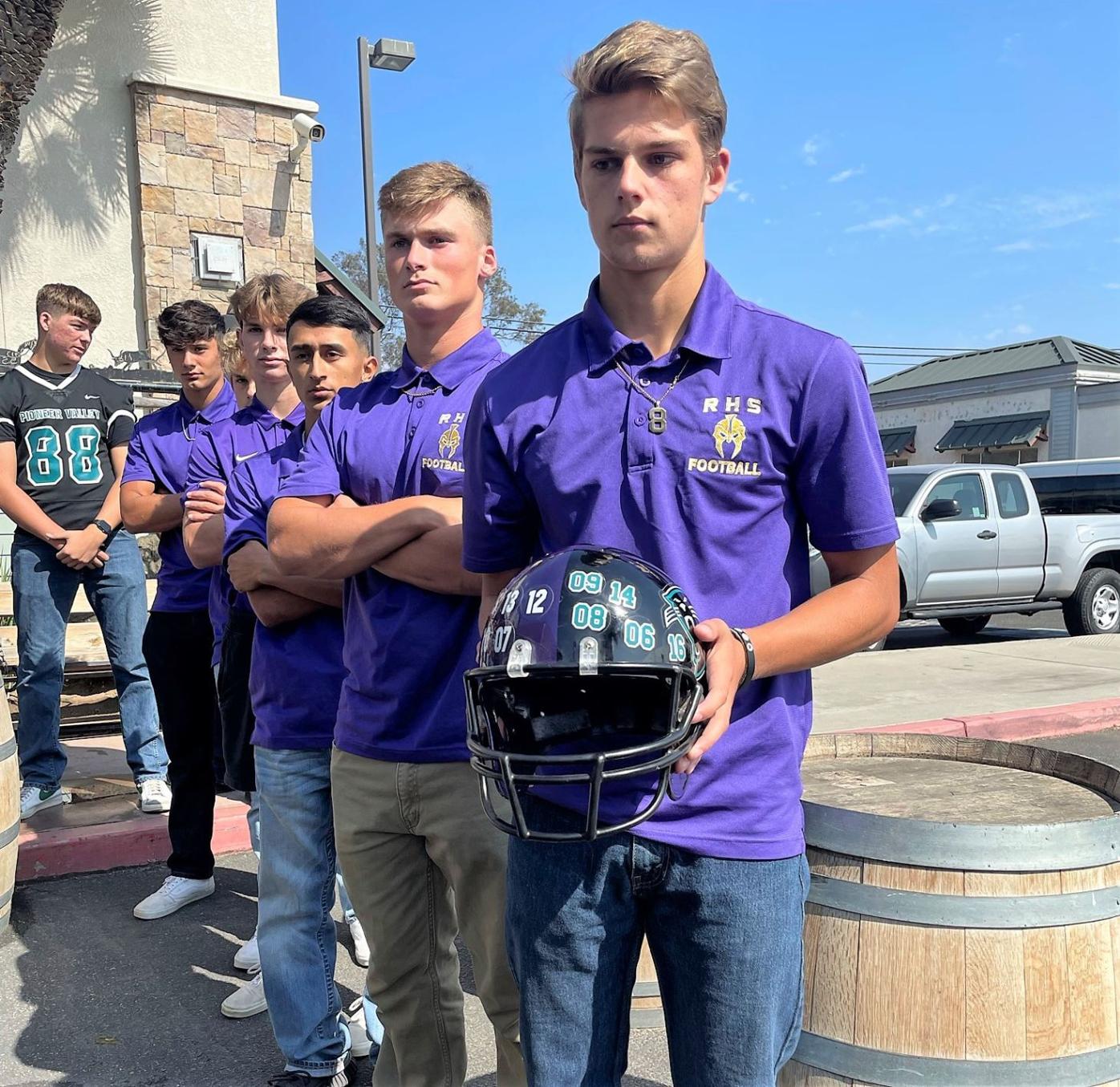 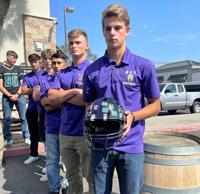 Righetti football player Zach Monighetti displays the helmet that the Warriors and Panthers play for each year in the 'Battle for the Helmet' rivalry game. Players from the Pioneer Valley and Righetti football teams met at Cool Hand Luke's in Santa Maria for a pre-game meal Wednesday. Righetti hosts Pioneer Valley in the game Friday night at 7 p.m. The Warriors have won the last three games in the series.

Players from the Pioneer Valley and Righetti football teams met at Cool Hand Luke's in Santa Maria for a pre-game meal Wednesday. Righetti hosts Pioneer Valley in the annual rivalry game known as the 'Battle for the Helmet' Friday night at 7 p.m.

Righetti football player Zach Monighetti displays the helmet that the Warriors and Panthers play for each year in the 'Battle for the Helmet' rivalry game. Players from the Pioneer Valley and Righetti football teams met at Cool Hand Luke's in Santa Maria for a pre-game meal Wednesday. Righetti hosts Pioneer Valley in the game Friday night at 7 p.m. The Warriors have won the last three games in the series.

Make no mistake about it, there will be a lot on the line Friday night when Righetti hosts Pioneer Valley in the annual rivalry game known as the 'Battle for the Helmet.'

Even though both Righetti and Pioneer Valley are winless, the teams have been mostly competitive this season.

The buzz is still there for this game. Top players from each team, along with coaches and administrators from both schools, met at the annual luncheon at Cool Hand Luke's in Santa Maria Wednesday afternoon to take a moment to cherish the rivalry game. The contest has not been played since 2019 due to the coronavirus pandemic.

The game means even more now that both teams are in the Mountain League.

VOTE: Martinez, Maldonado, Miller, Placencia, Puga and Evans up for Player of the Week

Righetti enters its homecoming game 0-5 on the season after losing to unbeaten Nipomo 21-13 at home last week to start league play.

The Panthers, who were bumped up to the Mountain League after going 3-1 in the spring, are 0-4 after falling to Arroyo Grande 34-7 last week. They are 0-2 in league games after losing to Nipomo 26-20 in their first league contest.

The Panthers, coached by defensive guru Dustin Davis, have allowed just 73 points in four games this year. The problem, though, is that they have scored just 27.

"Coach Davis is one of the best around at that defense and he's been doing it for a long time," Payne said. "He's had success at St. Joseph and Lompoc. We're going to lean on our Wing-T this week and find which 'families' work against his fronts. We've been watching a lot of film and it's going to come down to our athletes and who's most prepared and able to execute."

Righetti is winless but the Warriors have been put through a gauntlet: Their opponents this year are a combined 23-7. They lost to Santa Fe Springs St. Paul 28-21 and Nipomo 21-13 in their last two games. Those teams are both 6-0.

"We've played a tough schedule and we have not yet put four quarters of play or four good quarters of coaching together yet," Payne said. "I feel like as soon as we're able to do that, if we execute, this will be a really good game. Both teams are on the verge of finding themselves and making a statement in our league."

Davis, who took over at Pioneer Valley about a month before the season started after serving as the defensive coordinator at Lompoc, is familiar with facing Righetti in rivalry games after coaching St. Joseph for five seasons. He went 3-2 against Righetti while St. Joseph's head coach, including a 43-7 win over the Warriors in his final season there in 2016.

Pioneer Valley's defense has been strong while the offense has lagged behind, being shut out twice this year.

"Our only focus is to just improve every week," Davis said Wednesday. "We've made some good strides on both sides of the ball. Righetti is a good team and I think both of our records don't indicate how good or not good we are. If you look at most of our games, a play here or a play there and the outcomes are completely different."

The Panthers started the season with a 6-0 loss to San Luis Obispo. They then lost to Nipomo 26-20 and at Templeton 7-0. The Panthers' opponents this year are a combined 16-6.

“They've got a couple nice tools at the receiver position and their running backs run incredibly hard. We've got to play mistake-free football and not let a three-yard gain turn into an eight-yard gain because we can't get a guy tackled."

Elias Martinez and Cooper Bagby, both seniors, have been the Warriors' top play-makers at receiver. Quarterback Braden Claborn returned last week against Nipomo after missing several weeks with a broken collarbone. Martinez and Bagby both caught touchdown passes from Claborn last week. Martinez, also one of the area's top defensive backs, had an interception that set up his touchdown catch in the fourth quarter last week. Boivin is the Warriors’ top running back.

Receiver Adan Rubalcava, a senior, has been far and away the Panthers' best play-maker on offense this year, scoring in a number of ways. He's especially happy to be able to play in Friday's game after the Santa Maria game was canceled this year.

"I feel like my season has gone how I wanted it, but I feel like myself and the team can keep improving," Rubalcava said. "I just want to better this team. It sucked not being able to play SM, I was ready for that one, but having this Righetti game is going to be good. It's nice to have a meal like this, but once we step on the field I don't know them."

VOTE: Martinez, Maldonado, Miller, Placencia, Puga and Evans up for Player of the Week

Maldonado has been strong for Lompoc all season, but the Lompoc sophomore had his best game of the year in a 44-38 loss to Santa Barbara. He caught three huge touchdown passes, including one that tied the game at 31 in the second half on a reverse pass. Maldonado is also a starter on defense.

Martinez helped Righetti nearly tie up Nipomo late in Friday's league game. He intercepted a pass near his own end one, then scored on a 57-yard touchdown catch-and-run that could've tied the game at 14, but the Warriors' extra point failed with about 90 seconds left in the game. Nipomo ended up returning the ensuing onside kick for a touchdown in the 21-13 win.

Miller, a senior at St. Joseph, played in his second game of the season last week against Paso Robles, and made an impact, mostly playing on defense. The safety has helped captain the defense and makes big special teams plays.

He also got into the act on offense, hauling in a huge 20-yard touchdown on fourth down to give the Knights a 21-20 lead in a game they eventually lost 26-21. Miller also had a 50-yard kick return on the Knights' final possession, setting them up to go in for the go-ahead touchdown, though the drive eventually ended with an end zone interception.

Meanwhile at Santa Maria High, David Placencia has been a rock for the Saints, playing just about every position. Coach Albert Mendoza noted how he played every snap on offense and defense in the loss to San Luis Obispo. He had 14 tackles and a blocked punt on defense and has also played quarterback.

Arroyo Grande's Makai Puga had 164 yards and three scores on only 10 carries in the Eagles' 34-7 rout of Pioneer Valley.

Gabe Evans was key in the Titans' win over Righetti. Evans ran 20 times for 85 yards and a pair of touchdowns while also making nine tackles on defense.

On the move: Santa Ynez, Lompoc and Cabrillo joining other area schools in CIF Central Section

The CIF Central Section has grown by three schools this week.