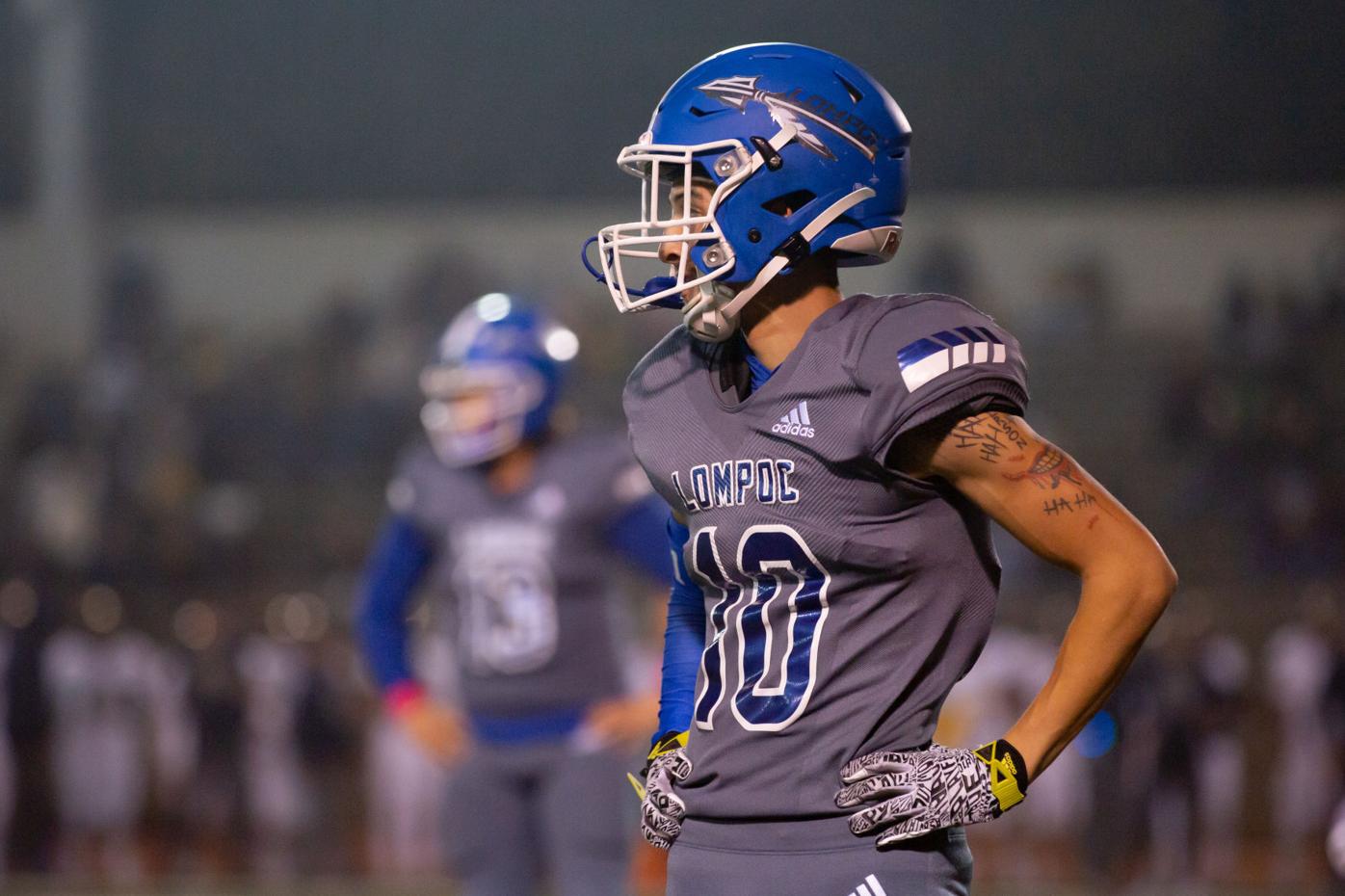 Lompoc High's Deville Dickerson waits for instruction from the sidelines during Friday night's home game against Dos Pueblos at Huyck Stadium. Dickerson and the Braves host Anaheim Western in the first round of the playoffs on Friday. 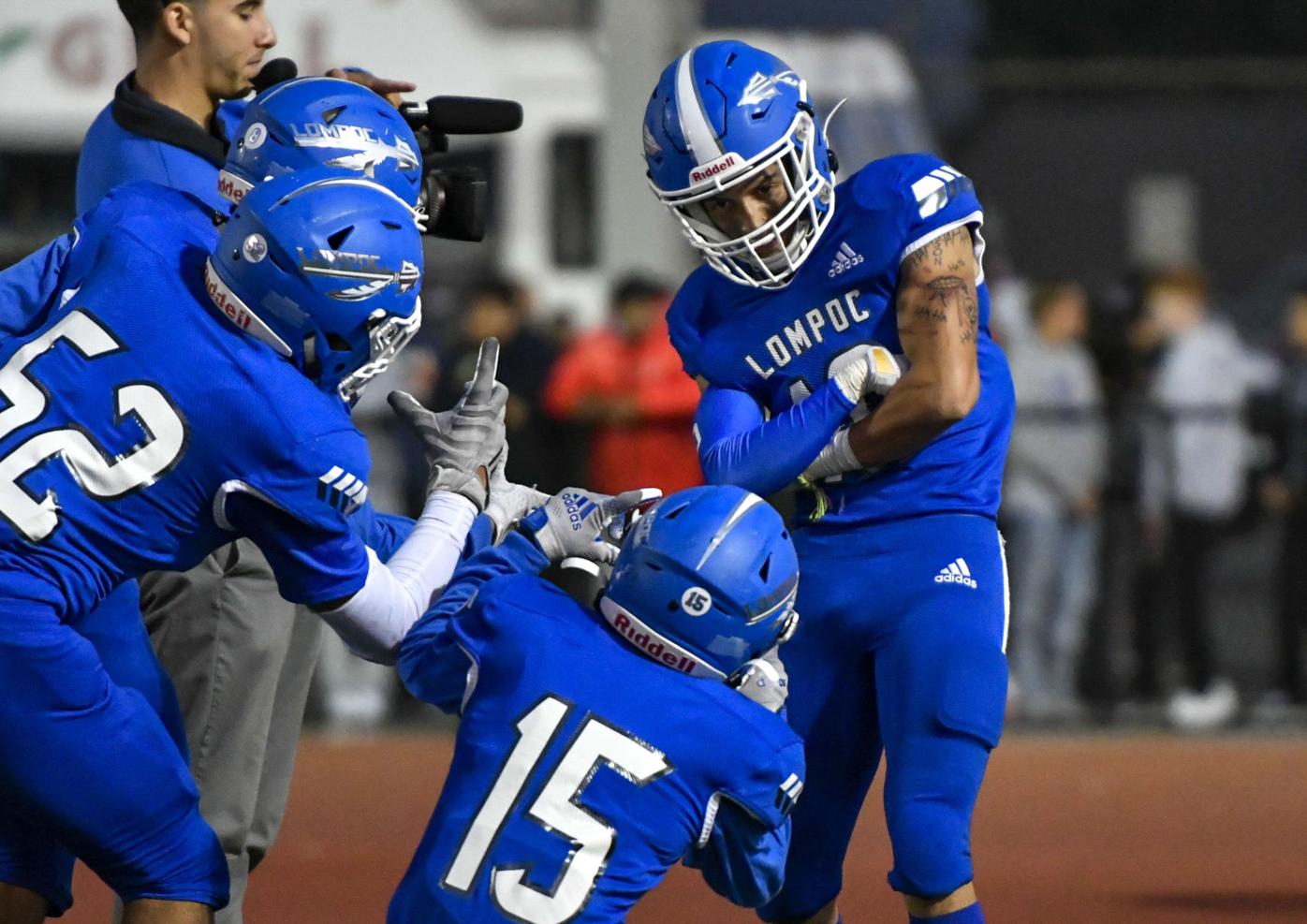 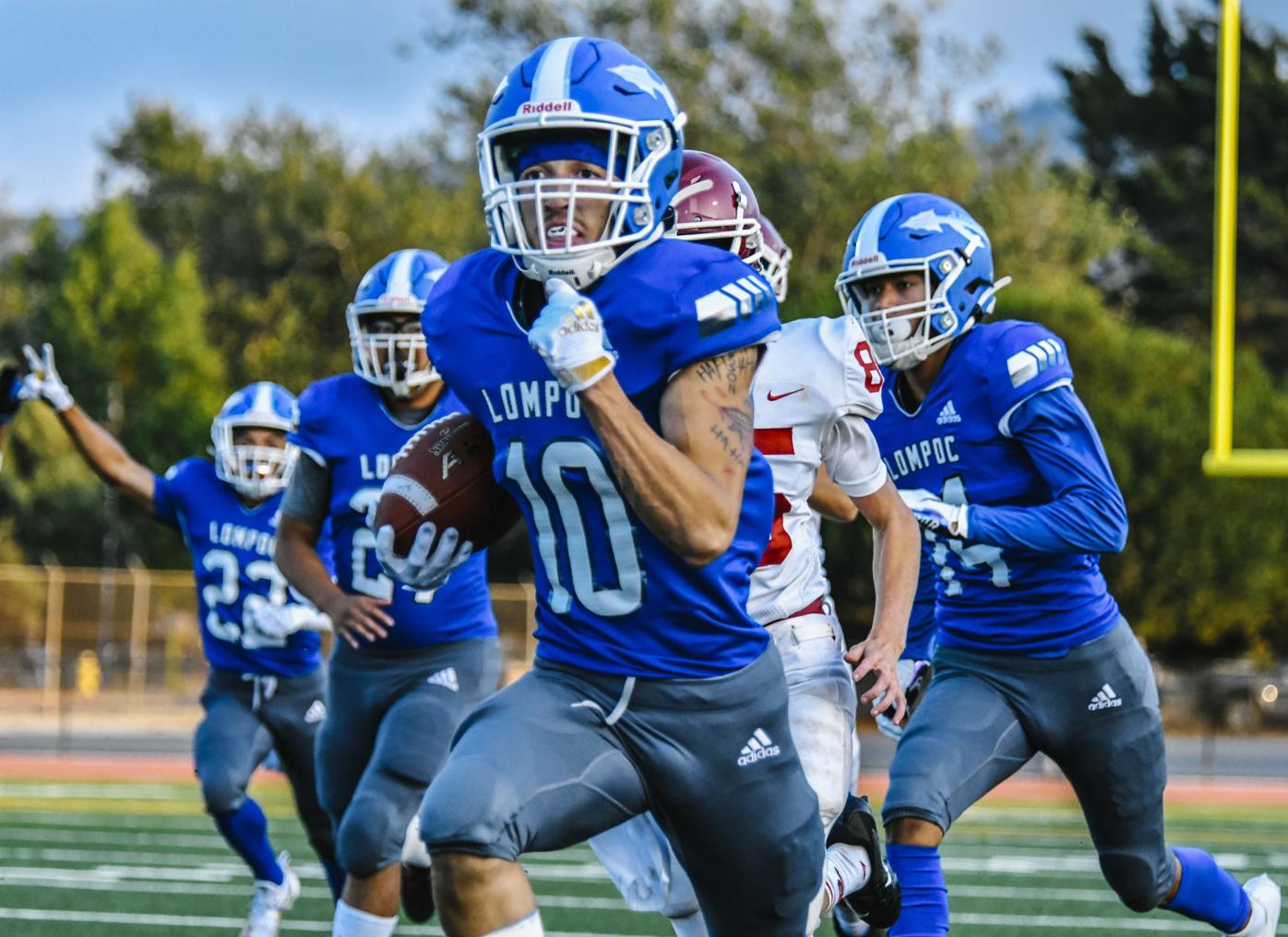 Lompoc’s Deville Dickerson returns the opening kickoff to score against Paso Robles at Huyck Stadium in the season-opening game. 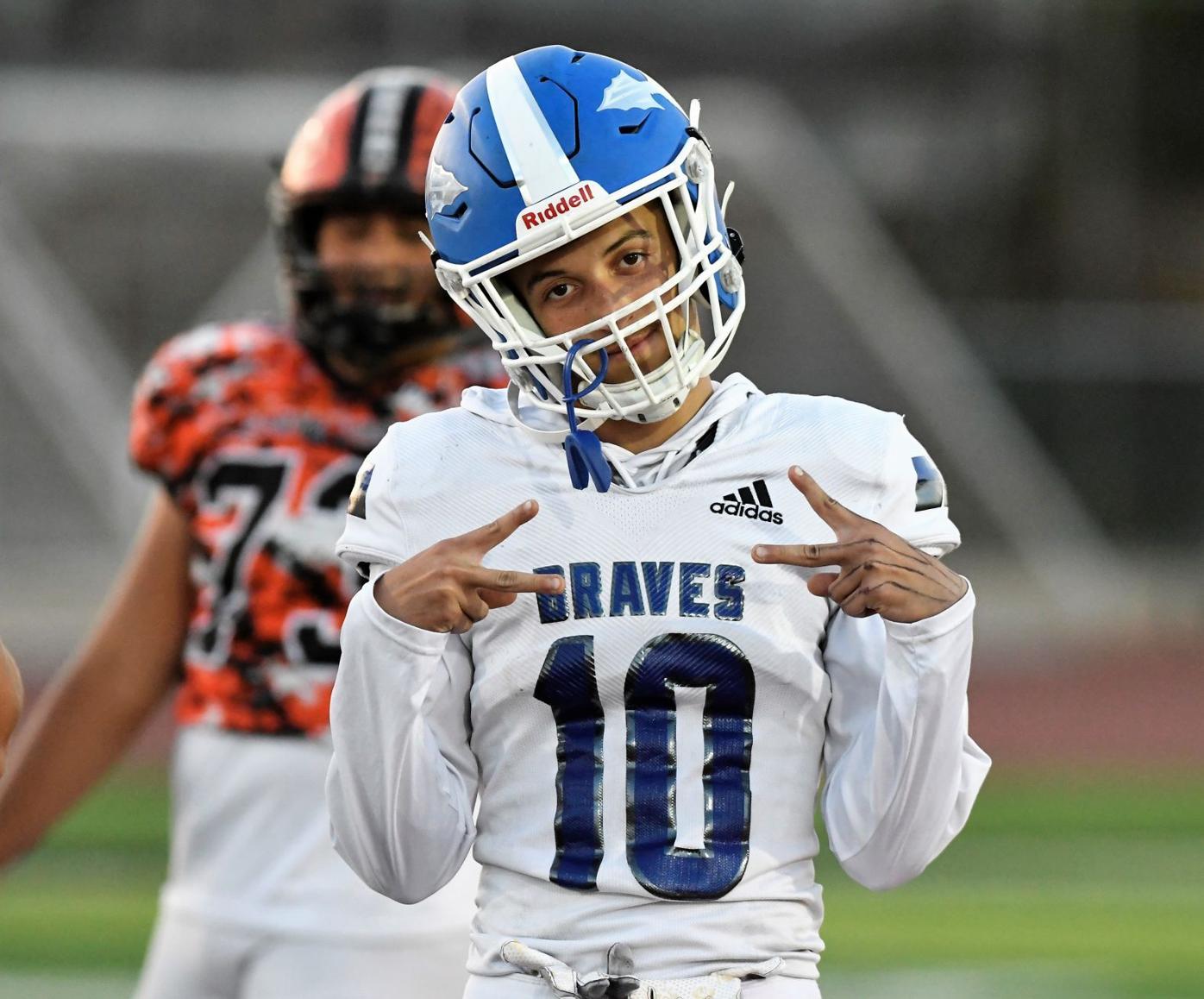 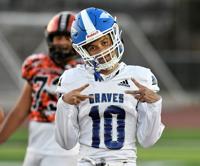 Lompoc High's Deville Dickerson waits for instruction from the sidelines during Friday night's home game against Dos Pueblos at Huyck Stadium. Dickerson and the Braves host Anaheim Western in the first round of the playoffs on Friday.

Lompoc’s Deville Dickerson returns the opening kickoff to score against Paso Robles at Huyck Stadium in the season-opening game.

It's hard to take your eyes off Deville Dickerson when he's on the football field. If you do, you're probably going to miss something.

Dickerson, now a third-year varsity player at Lompoc High who transferred in from the state of Washington as a sophomore, is capable of making an eye-catching play at any given moment.

Let's take a look at some of the numbers. This season alone, in addition to throwing a touchdown pass, Dickerson has rushed for a touchdown, caught nine more, returned four more for scores on punts and four more on kicks. That's 18 touchdowns scored in four different ways against some of the region's best competition.

VOTE: Eight up for final regular season Player of the Week

Dickerson, who has verbally committed to Idaho State, and the Braves host Anaheim Western in the first round of the CIF Southern Section Division 9 playoffs Friday night at 7 p.m.

It's a near guarantee that Dickerson will impact the game in many ways.

In fact, Dickerson doesn't even have to touch the ball to change the game. As a lethal threat to return kicks and punts, most teams have opted not to kick to Dickerson at all. Kickers have even resorted to kicking the ball directly out of bounds on kickoffs, taking the penalty and putting that ball at the 35 rather than giving Dickerson an opportunity to score.

How did this all come to be? How does Dickerson continue to impact the game? Well, besides being an incredibly talented athlete, Dickerson is also one of the most confident players in the state. That confidence doesn't come from nowhere. It is earned via preparation, Dickerson says.

"I'm there putting in the work, doing the extra stuff before and after practice. It's the little things I comprehend," he said after scoring five times in a 64-28 win over Oxnard.

After catching 20 passes in 15 games in his first two seasons at Lompoc, Dickerson has transformed into the area's top receiver. He has 56 receptions for 1,024 yards and those nine touchdowns, working in tandem with junior quarterback Cavin Ross.

"One on one, I can not be guarded," Dickerson says. "I don't care who it is. You can '@me' on this, I don't care. One on one with Cavin as my quarterback, you're not guarding me. If teams come out at halftime and put me in 'man' (coverage) and think they have a corner (covering) me, sometimes it just gets embarrassing."

That swagger and confidence also impacts opponents in other ways, which may not be surprising considering Dickerson has adopted the 'Joker' persona. At least once a game, Dickerson can be found mixing it up with opposing players, usually with opponents taking a late hit or adding in some extra words after a play. He clearly gets under his opponent's skin and thrives on it.

"I think it's funny. I think it's hilarious," Dickerson said. "Everyone comes out and says 'Oh, I'm Batman.' Then I just show them with the stats. I don't even have to talk. They'll push me to the floor, they'll blindside me and stuff like that, but the refs usually see it. So, it's fine. I love it."

Lompoc coach Andrew Jones says he's not surprised by anything Dickerson has done in his time at Lompoc.

"He's just so explosive and he's the ultimate competitor," Jones said. "He's a fun guy to coach and it's amazing because every coach tells me they're not going to kick it to him and for some reason he still keeps scoring. He has this extra gear and an ability to find a lane, he's extremely slippery. He puts on this speed burst and he's just gone. He's definitely a dynamic player and I'm definitely going to miss him in the future."

Dickerson has amassed 1,898 all-purpose yards this season, with over 800 coming on kick and punt returns. He's made 41 tackles and intercepted a pass this season. Dickerson has five career interceptions at Lompoc and likely projects as a cornerback at the next level, but has shown Idaho State that the Bengals may need to make sure they get the ball in his hands.

VOTE: Eight up for final regular season Player of the Week

Travis Royal had two interceptions to help lead St. Joseph's dominant defensive performance against Righetti, helping the Knights limit the Warriors to just a single touchdown. It's Royal's second two-interception game of the season after he had one against Arroyo Grande.

Carter Vargas handled the bulk of the rushing duties against the Warriors and scored the Knights' first three touchdowns to build up a healthy lead en route to the 26-7 win.

Makai Sat had a big hand in the St. Joseph offensive success on the ground, opening up big holes on the offensive line. Sat also played on the defensive line.

Ryan Boivin had Righetti's lone touchdown and worked some out of the wildcat to lead the offense.

Canley scored three different ways in Lompoc's 60-7 win over Dos Pueblos and scored four touchdowns. He ran for a score, caught two touchdown passes and returned an interception 60 yards for another score. He had 99 yards on 11 carries and 87 yards on three catches.

Kaden Tynes had another one of his trademark performances, impacting the game in all kinds of ways in Arroyo Grande's 62-35 win over Paso Robles.

Tynes has been spectacular all season and that run continued as he rushed for 152 yards and five touchdowns in the Eagles' huge 62-35 win over Paso Robles to clinch a share of the Mountain League title.

Heller finished 71 yards on two carries with two touchdowns and also made two tackles on defense in the win over Maricopa.

Meanwhile in Santa Ynez's 42-6 win over San Marcos, Cash McClurg had 121 yards on 14 carries with a touchdown to earn a nomination.

The final regular season Power Rankings are here and they look quite a bit different from the season-opening rankings.