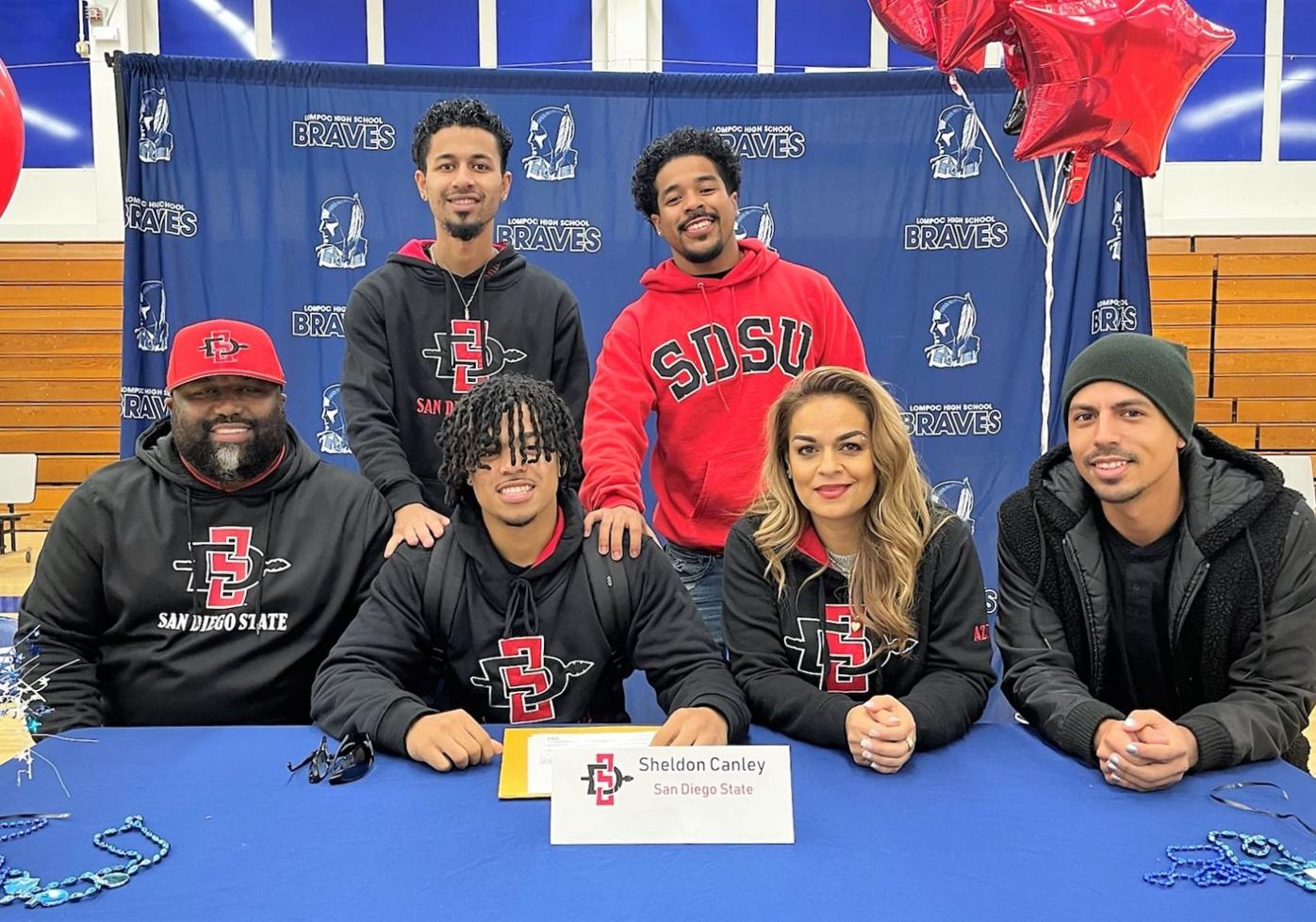 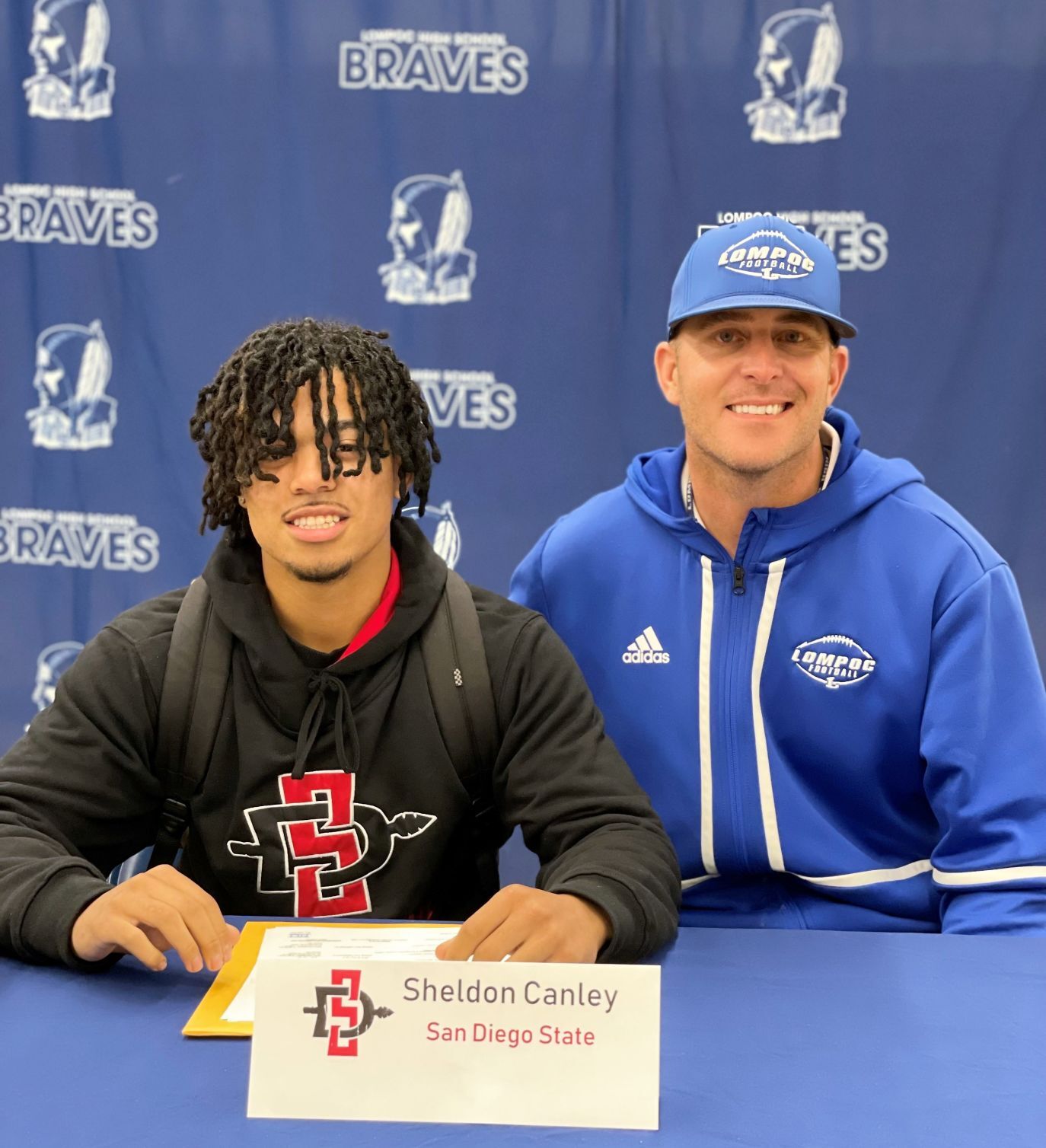 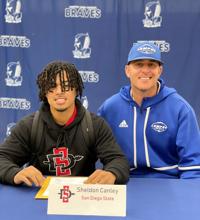 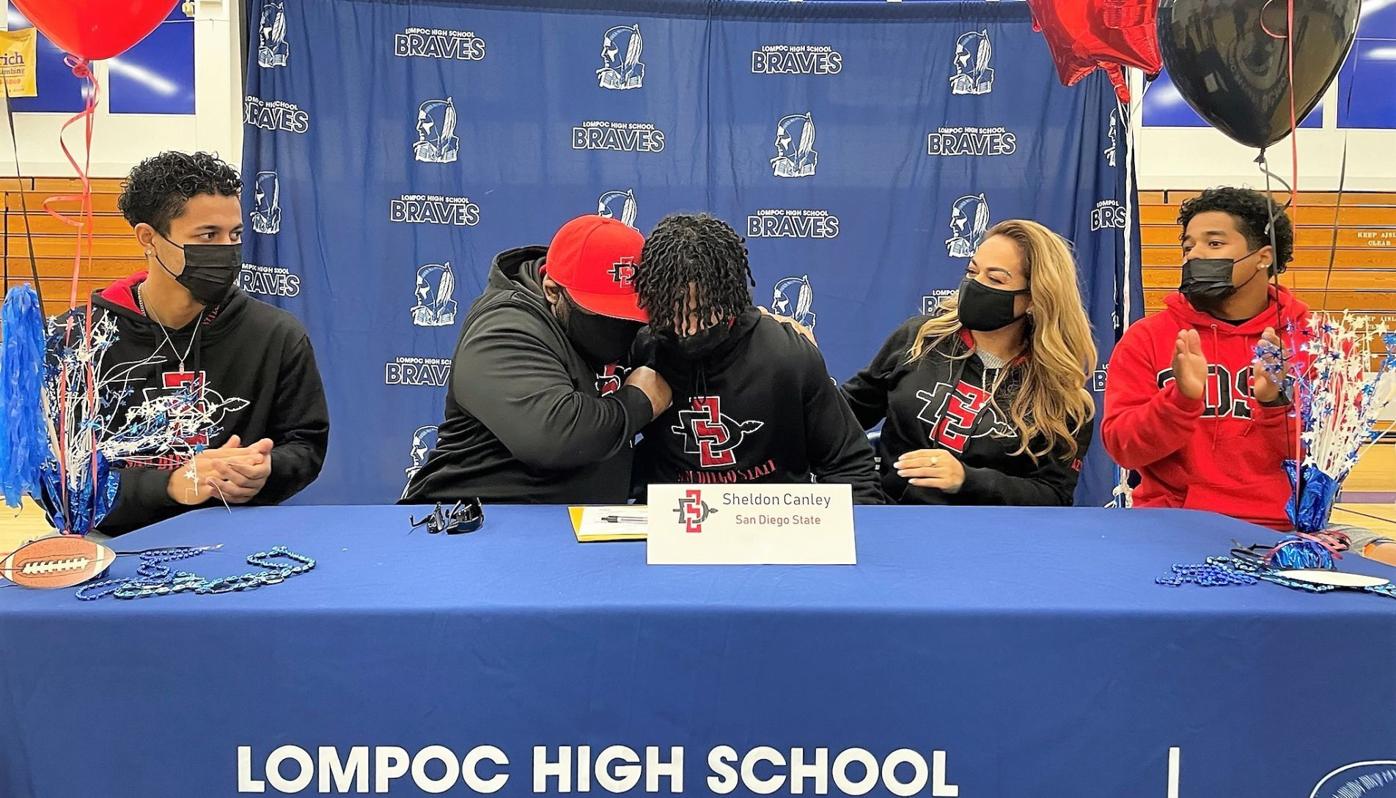 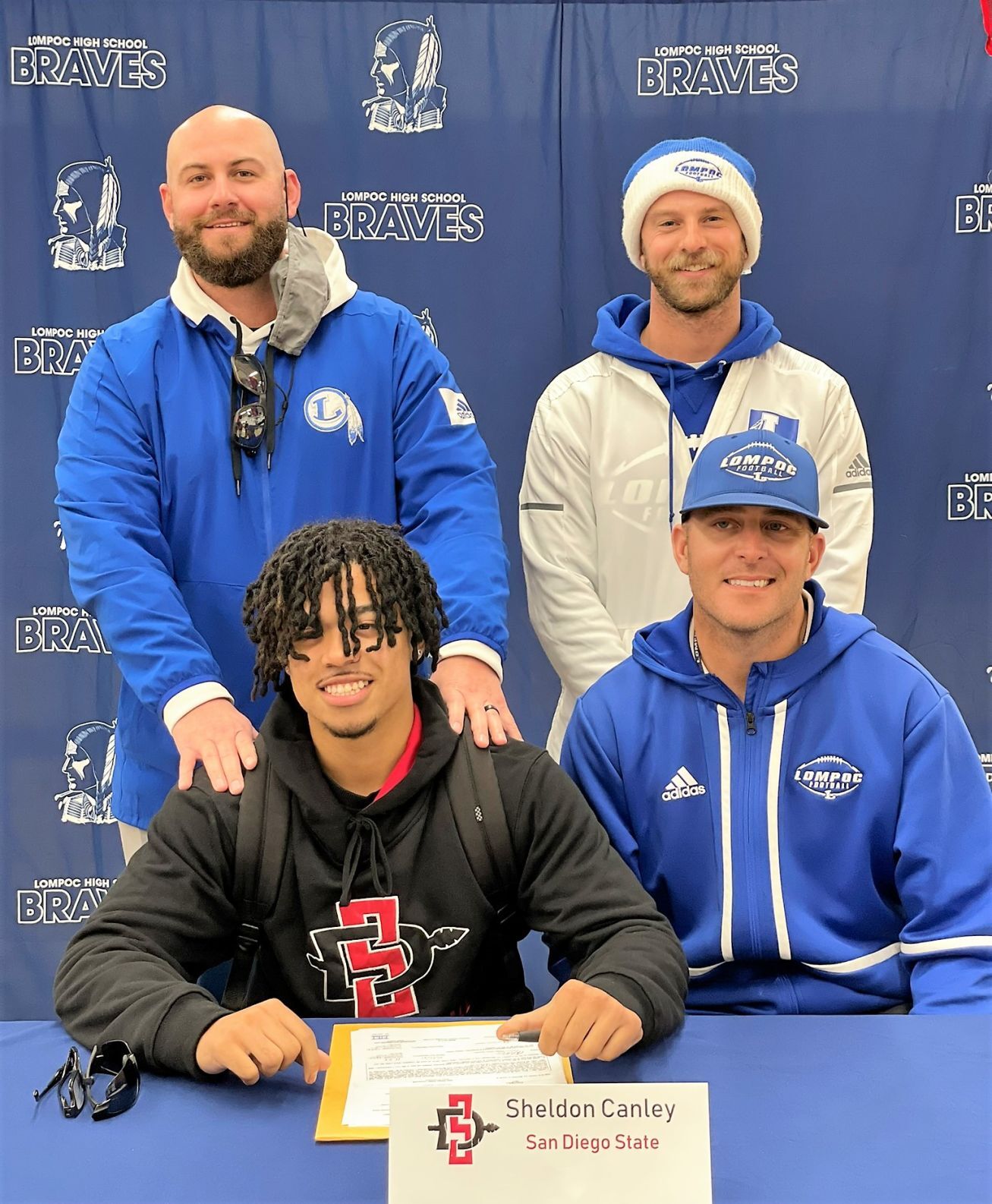 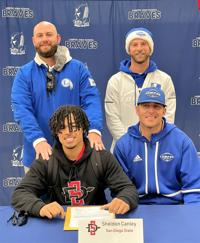 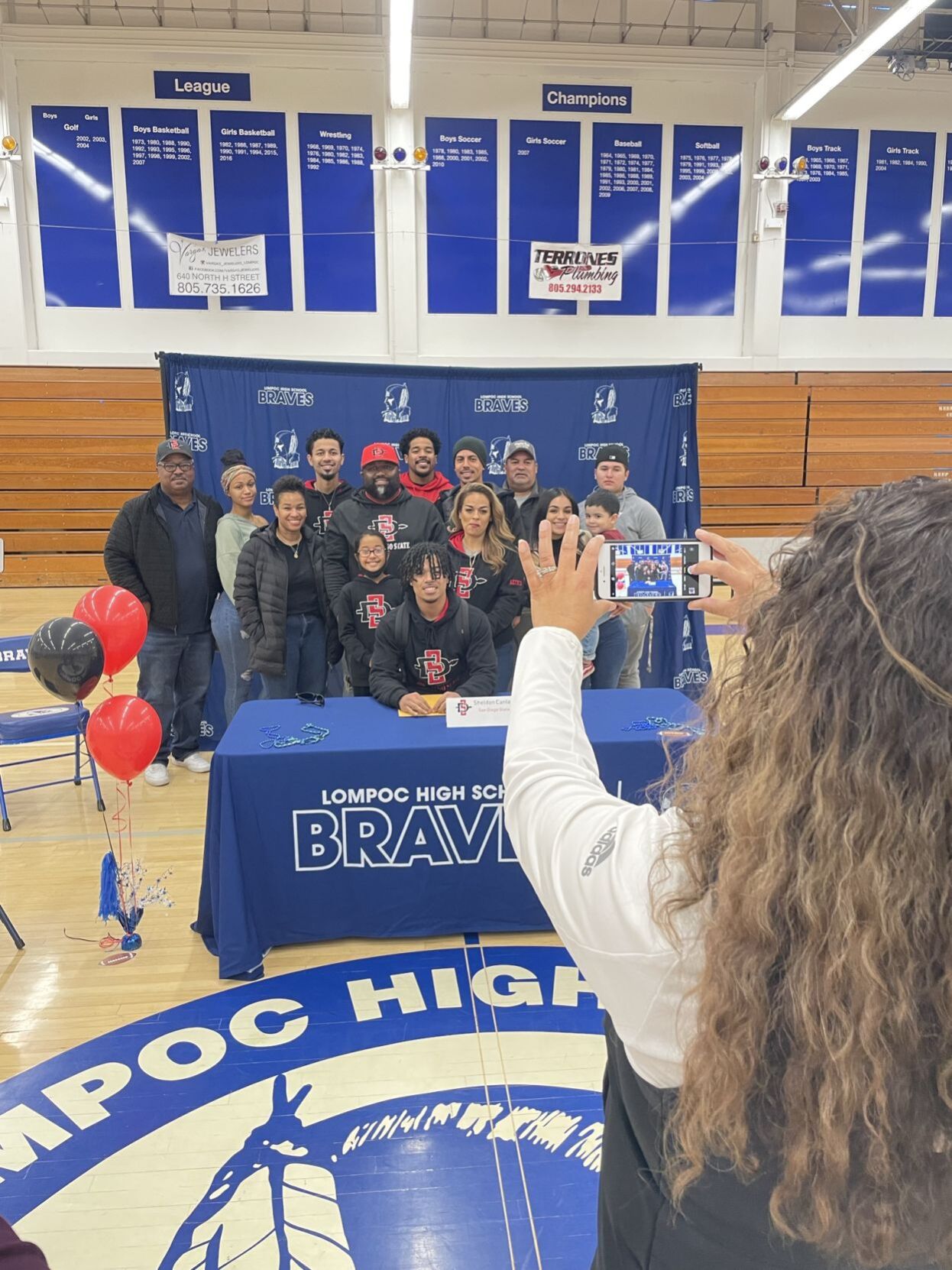 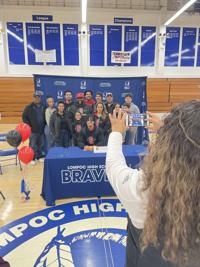 There weren't any surprises or much drama inside Lompoc High's Paisola Pavilion on Wednesday afternoon.

Still, there was some emotion in the room.

The cool, calm and collected running back showed about as much emotion as he ever has in the public view.

"It's kind of an emotional and exciting feeling now that it's actually set in stone and I actually signed," Canley said. "I'm proud that I actually did that and I'm excited to get on the road. Now I know exactly where I'm headed."

But what made him stick with San Diego State was the program's ability to send running backs to the NFL. Rashaad Penny was a first-round pick by the Seattle Seahawks in 2018. Donnell Pumphrey was a fourth-round pick in 2017 after setting the NCAA Division I all-time rushing record with 6,405 yards. Ronnie Hillman was drafted by Denver in the third round in 2012 and going back even further, Marshall Faulk was inducted into the Pro Football Hall of Fame after being selected second overall by Indianapolis in 1994.

San Diego State is a run-heavy offense under head coach Brady Hoke. The Aztecs went 11-2 this season and averaged about 180 yards per game on the ground. Greg Bell led the Aztecs with 1,057 yards this year. The team averaged over 200 yards rushing per game in 2020.

Canley said another big selling point was the coaching staff was "genuine" when trying to land the star runner. Canley was primarily recruited by Jeff Horton, the team's running backs coach.

"They actually wanted me, that's what I liked about the coaches," Canley said. "I actually felt wanted there. That seemed like the place I wanted to go."

San Diego State's 11-2 season was also a contributing factor in going with the Aztecs.

"I like to win," Canley said. "I think it'll be a great fit for me. I definitely think I fit in, that's another reason why San Diego State was the place for me to go."

Canley picked SDSU over San Jose State, where his father starred at. Canley Sr. played at Lompoc High then Hancock College before setting multiple records at San Jose State. He was then a seventh-round draft choice by the San Francisco 49ers in 1991.

"He taught me everything I needed to know to actually get to the next level, that's how I look at it," Canley Jr. said of his father. "He told us all the steps, he wouldn't lie to me, so I listen to everything he tells me. He's been there."

What kind of player is San Diego State getting? Lompoc coach Andrew Jones says Canley is one of the best he's ever coached in 12 years at Lompoc. Jones has already seen two of his running backs sign with Division I schools, in Lavon Coleman (Washington) and Toa Taua (Nevada).

"He carried us through some tough games and some of the plays he made this year were truly amazing," Jones said. "It's a testament to him. When people ask me about him, he's probably hating the fact that he's in front of a camera talking about himself. He's real soft spoken and extremely humble.

"When I think of Sheldon, he's strictly business. That's how he is. He doesn't want to talk much, he wants to get to work."

Jones said with Canley's speed and his approach to playing the position, he wouldn't be surprised to see him "play on Sundays."

Canley rushed for 1,573 yards on 173 carries with 23 touchdowns this past season. He was unanimously voted the Channel League MVP despite the Braves finishing in fourth place in the league standings. He also had five receiving touchdowns and 306 yards on 23 catches. He scored 27 total touchdowns in 11 games.

Canley rushed for 2,893 yards in 26 games in a Lompoc uniform, scoring 43 rushing touchdowns and 50 total touchdowns.