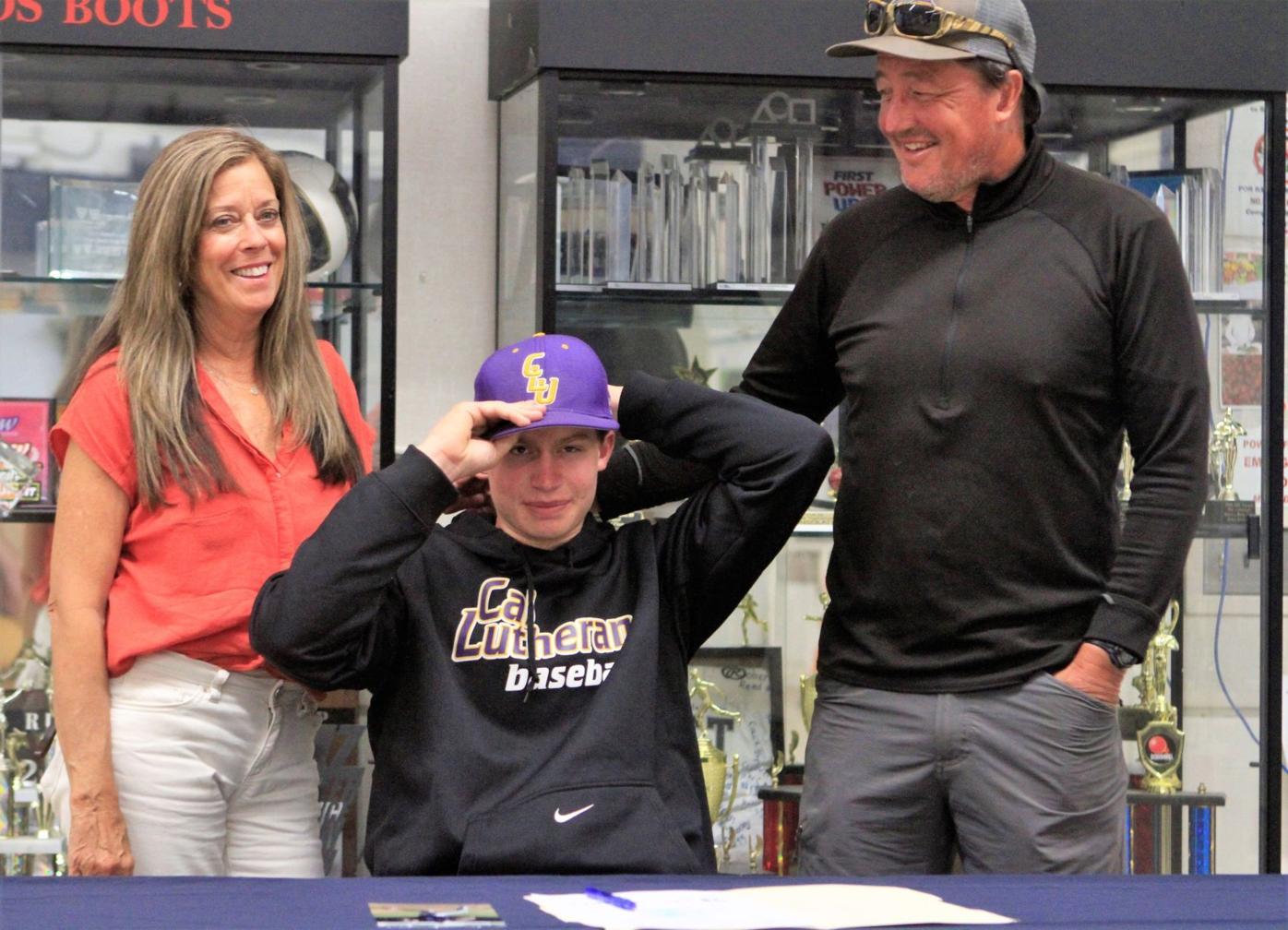 Orcutt Academy baseball player Connor Adams, center with parents Lisa and Joe, signed to play a Cal Lutheran during a ceremony on the OAHS campus Wednesday. 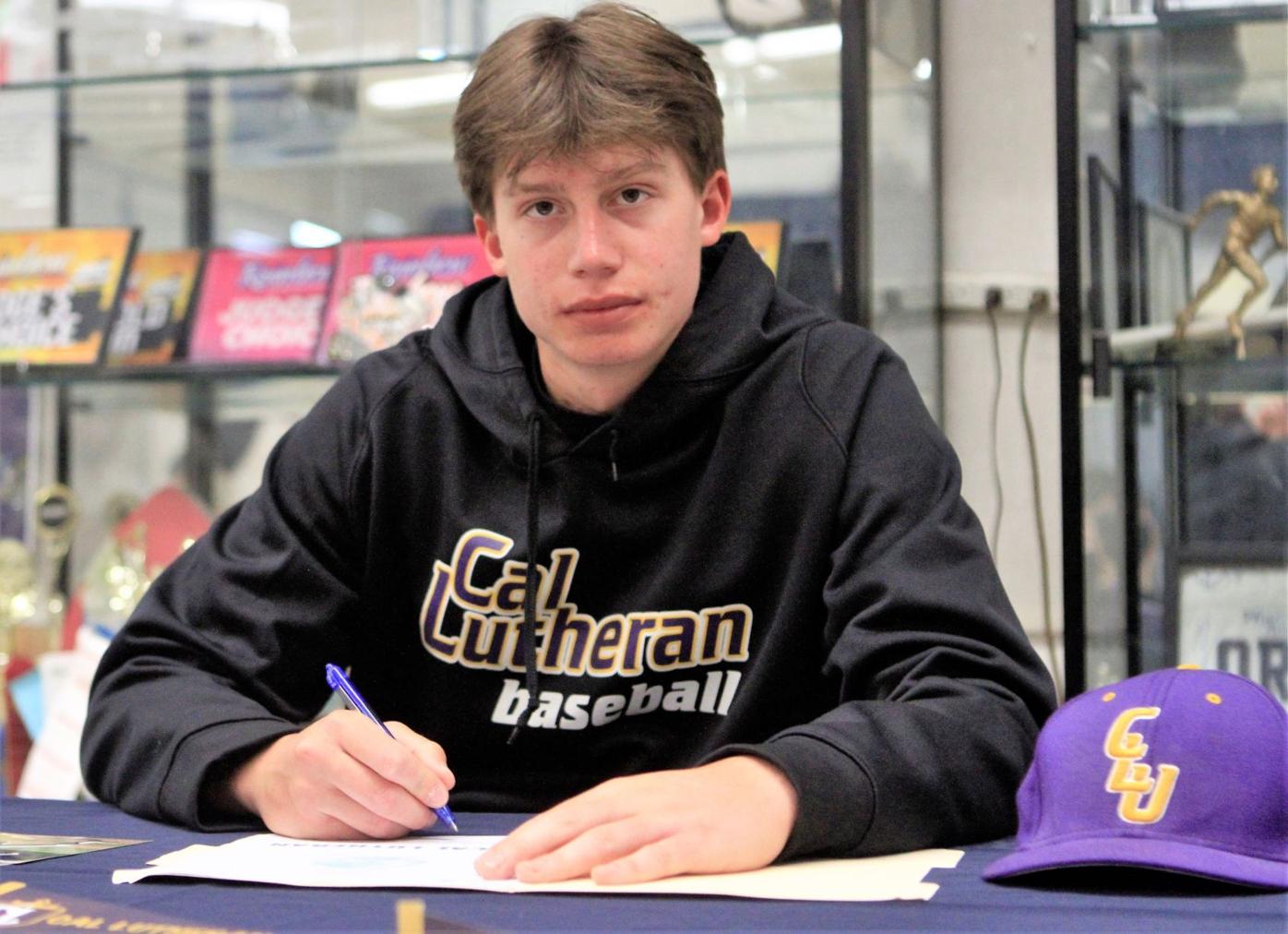 Orcutt Academy baseball player Connor Adams signed to play a Cal Lutheran during a ceremony on the OAHS campus Wednesday. 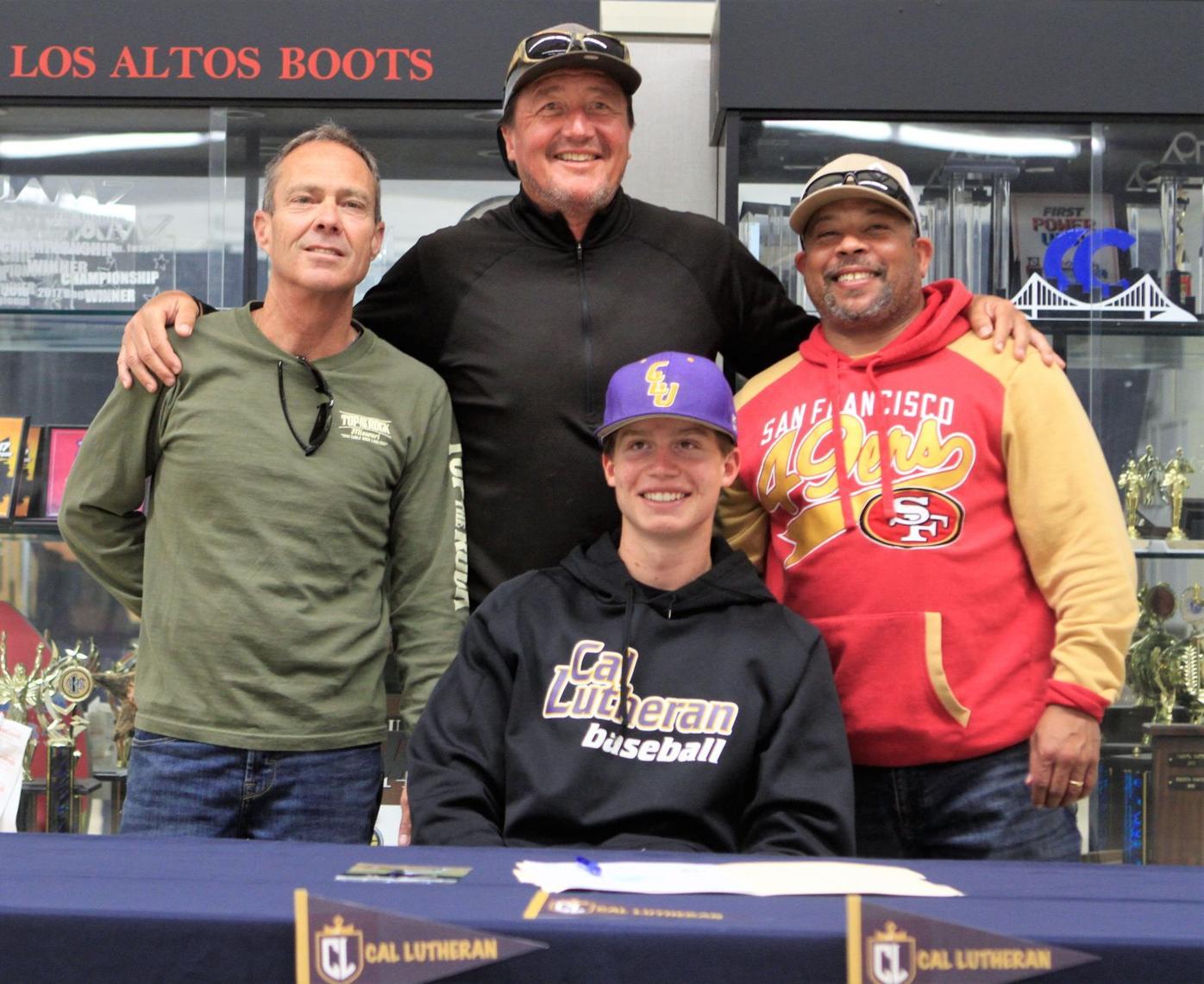 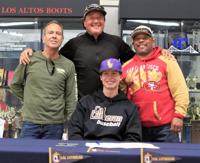 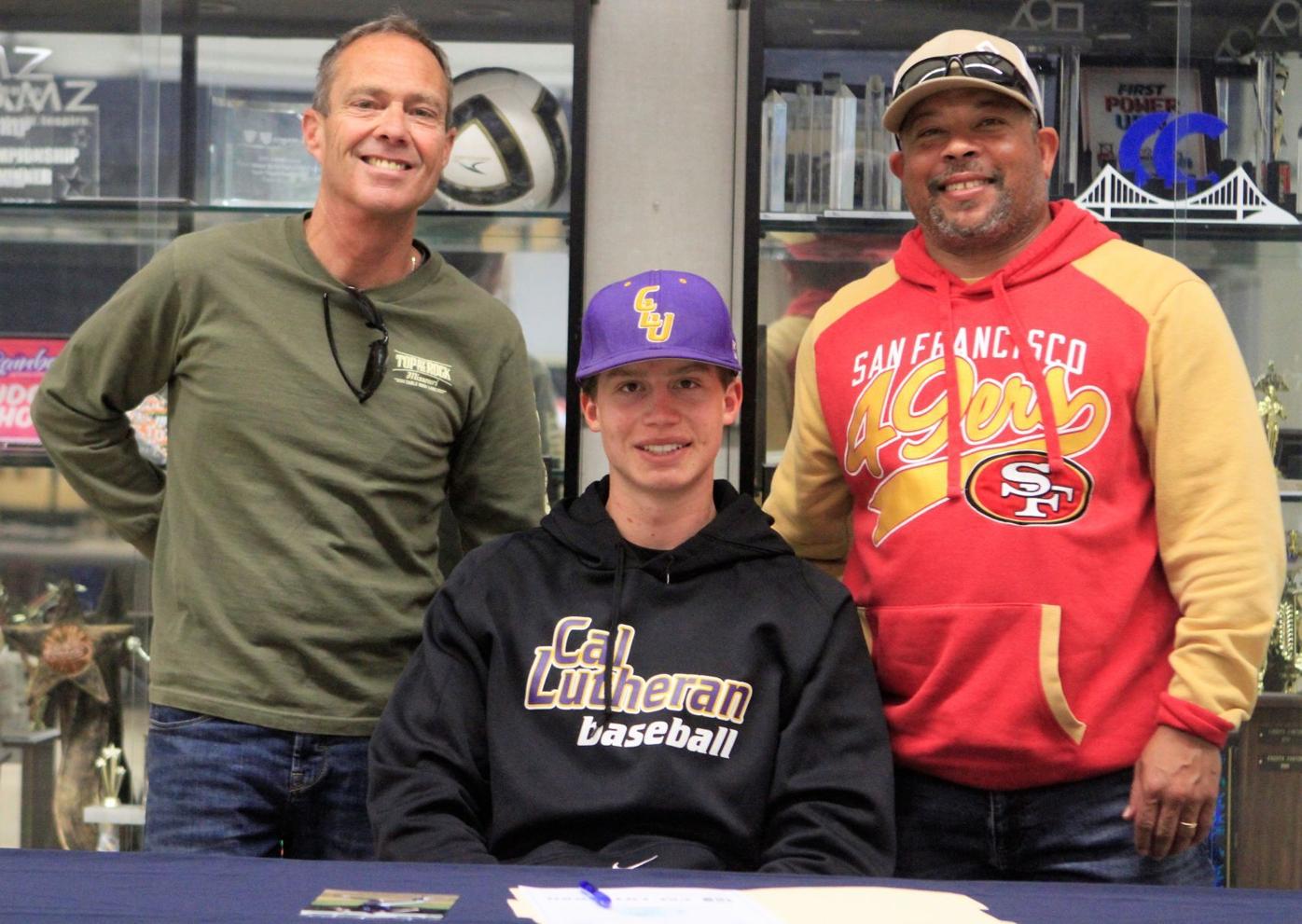 Orcutt Academy baseball player Connor Adams, center with parents Lisa and Joe, signed to play a Cal Lutheran during a ceremony on the OAHS campus Wednesday.

Orcutt Academy baseball player Connor Adams signed to play a Cal Lutheran during a ceremony on the OAHS campus Wednesday.

Connor Adams hopes to do a little bit of everything at Cal Lutheran.

The Orcutt Academy High School baseball standout made his commitment to the school in Thousand Oaks official during a small, on-campus signing ceremony Wednesday.

Adams says he plans on playing outfield and a corner infield position while also pitching and hitting for the Kingsmen.

Cal Lutheran is one of the better Division III baseball programs in the country, having won a national title in 2017. The Kingsmen play in the Southern California Intercollegiate Athletic Association.

Vote for male and female Athlete of the Week

VOTE: You can vote for both Athletes of the Week on all three sites.

Connor Adams will have some familiarity with the program. His older brother Cameron Adams played there in 2013 and 2014.

"When my brother played there, I got to know the coaches and some of the guys there," Connor said Wednesday. "They entered the season No. 1 in the country this year, so I've been fairly interested in them."

A big plus for Adams is that Cal Lutheran also features his intended major: computer science.

"So that gives me an opportunity to study what I want and play both ways," he said.

Adams says he'll be at one of the corner infield positions or in the outfield while also pitching occasionally. He's a right-handed pitcher and a switch hitter.

"It's a good fit for me. I feel I can compete at that level," Adams said.

Hank Muro, the Spartans' varsity coach, and Joe Adams, Connor's father and a youth baseball coach, were also instrumental in helping Adams develop into one of the area's better all-around players.

"You ask anyone, he works as hard or harder than anybody," Joe Adams said. "He loves baseball. His older brother played there, so we know he's going to a great program. The coach and assistant coach are still there and the hitting coach actually played with my son, Cameron. We're real familiar with the program so that helped Connor decide."

Connor Adams said he's now focused on getting in as many game reps as he can to prepare for Cal Lutheran. Amid the pandemic, he's had limited opportunities to play after losing nearly his entire junior season at the onset of the pandemic in March 2020.

"There haven't been too many games, but I'm lucky enough to live next to VCA and we're friends with the athletic director so I get to use the field almost every day," Adams said.

The high school senior said he's always been drawn to technology and is excited to expand his knowledge by studying computer science in college.

"I was trying to decide classes this year and I saw we had a computer science class and I decided to take it," Connor said. "I found that I really like it. It's been great being a student at Orcutt Academy. I feel the teachers are really engaged with all the students and we're able to learn a lot."

After Wednesday's ceremony, Adams and coach Muro hurried off to prepare for an Ocean League game at Nipomo Wednesday.

Vote for male and female Athlete of the Week

The Santa Ynez grad and three-year Hancock starter went 10-for-18 in four games last week, driving in six runs while scoring three times. Hancock beat Oxnard in all four of its games it played and enters the week on a seven-game win streak.

Nepa finished his Righetti career with a monster game, rushing 29 times for 202 yards and two scores as Righetti wrapped up its spring season with a 4-1 record in the 40-29 win at Templeton on Friday.

Figueroa helped the Saints to a three-game sweep of Orcutt Academy last week. He went 7-for-11 as the Saints' leadoff hitter.

The junior Dre Roman had a big week, culminating with his team-high 22 points in the loss at national power Sierra Canyon on May 1. Roman also had eight rebounds in that game

He averaged 16.4 points and six rebounds while playing limited minutes in a blowout and against elite competition in Sierra Canyon and Brentwood. He's developing into quite a prospect and one of the more promising players in the Central Section.

The UCSB commit has six homers this spring and hit three of them last week as Arroyo Grande swept Templeton and entered the week 15-0 on the season.

Orcutt Academy enters the week 5-1 in league and 5-1 overall with games against Righetti set for Thursday and Friday.

After nearly being named Athlete of the Week last week, Solorio is back again.

She's nominated by coach Erik Ramos after she had two more monster games as Santa Maria remained unbeaten on the season with two wins over Templeton, improving to 6-0.

In the April 27 game against San Marcos, she scored 14 points and grabbed 16 rebounds. In the April 29 game at Dos Pueblos, Padilla, a senior, had 14 points, 19 rebounds, one assist and one steals.

She then wrapped up her double-double spree with 10 points and 13 rebounds in a loss to Nipomo.

Padilla entered the week with 986 career rebounds and the Pirates have nine games left, meaning she needs to average over 16 rebounds a game to break it.

Branum is going for it this spring. She's the top cross country runner at LHS and is now doing track and basketball at the same time. She is a solid contributor for the Braves girls hoops team, which played Cabrillo on Friday night. Branum then got up the next morning and ran distance races in a three-team track meet.

In the one game the Titans played last week, Pu'a showed why she's one of the top players in the area.

Pu'a homered, drove in two runs and struck out 10 batters in only five innings as Nipomo cruised past Orcutt Academy 15-3.

Beating a team with a perfect record takes a perfect performance.