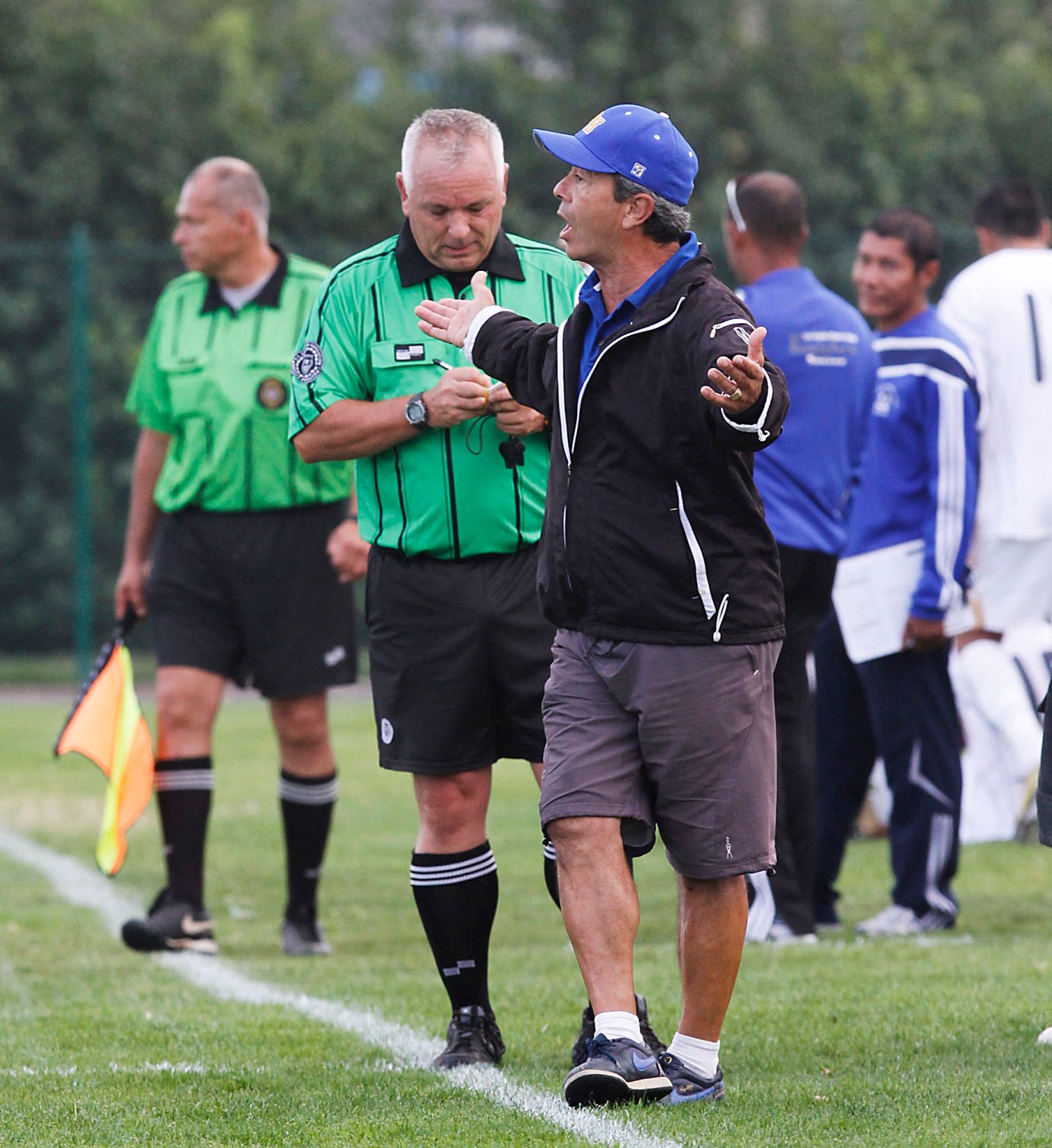 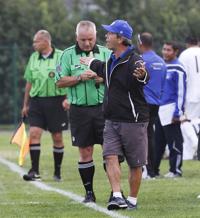 Al Garcia, seen during his days patrolling the sidelines at Hancock in 2010, is retiring from coaching. 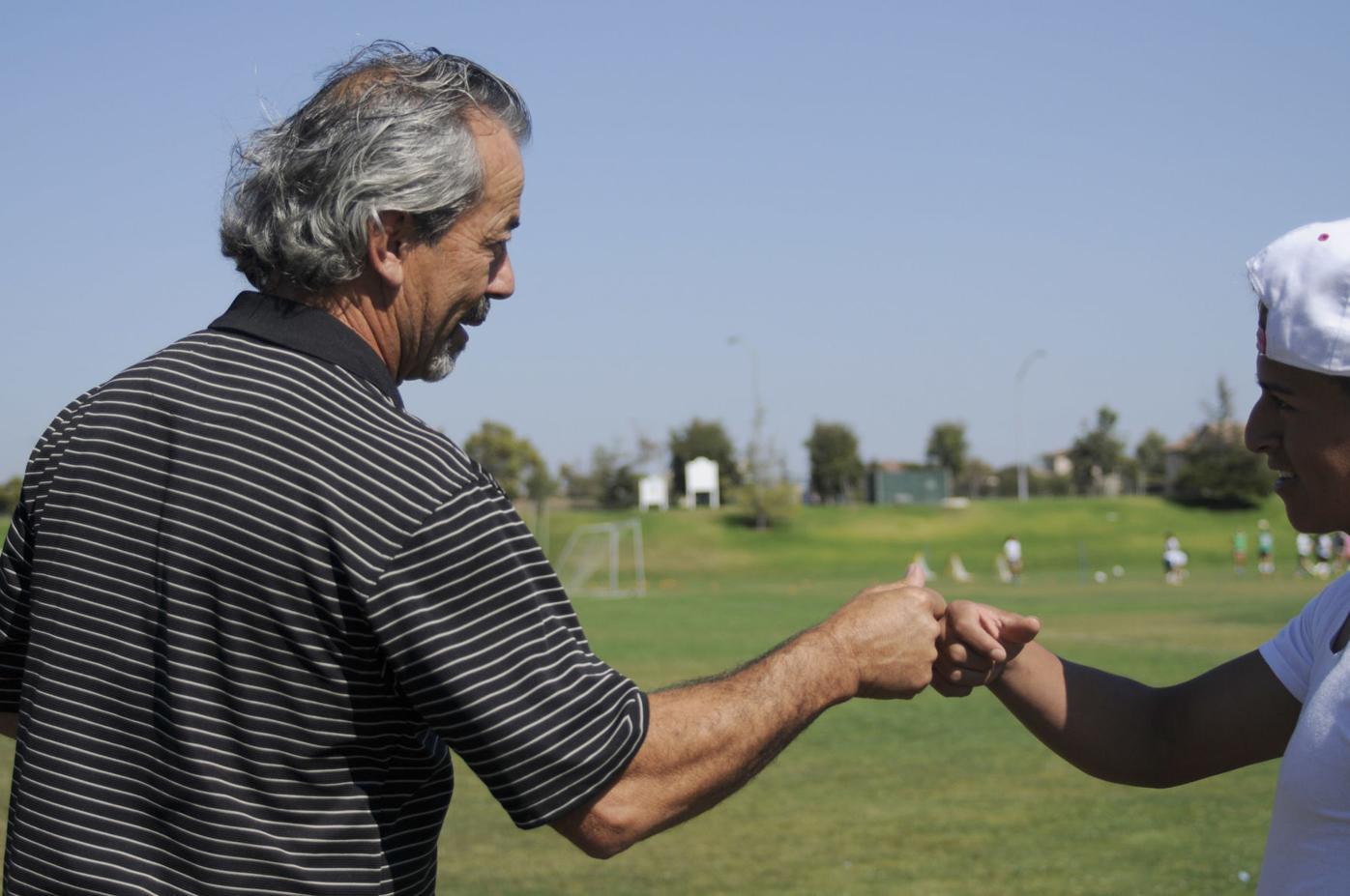 Hancock men's soccer team coach Coach Al Garcia fist bumps a player in practice during a 2012 game. Garcia, who's coached at both the high school and college levels, has retired from coaching.

Patriarch Al Garcia and his family were thriving in the San Diego County city of Vista when, in 1989, the unfathomable happened.

In an attempt to leave the tragedies behind, the Garcias left Vista and moved to the Santa Maria Valley, a place Al Garcia had visited on occasion and where he had family.

His longest runs were with the Hancock College men and the Santa Maria boys, who he coached for a combined 18 years in two stints. “I also worked with the football teams' kickers at every school I coached at,” said Garcia. “My passion was track and field, and I helped coach that sport at every school I was at. And I coached a club soccer team.”

On his decision to retire, Garcia said, “After 30 years straight of coaching, without a break, it was time. My wife of 43 years, Patricia, has been incredibly supportive. There was no way I could have done this without her. She kept waiting patiently for me to call it quits.

“I was coaching the St. Joseph girls soccer team and just before my granddaughter, Julie (Corteguera), started playing soccer for them I promised her I would coach her during her four years there. She finished her senior season this year.”

He has retired from the Santa Maria Joint Union School District after 30 years as well.

Softball: 805 Elite 14U readies for Nationals

“I was with Delta High School for 26 years, most of the time as an outreach consultant,” Garcia said.

Garcia had an extensive athletic background in soccer and American football. He kicked for Fresno State and was drafted by the then first-year Seattle Seahawks in the NFL, though he was cut in training camp.

“I thought I was the best kicker in camp, but oh well,” he said.

A move to the Santa Maria Valley followed by a long coaching career seemed unlikely at the time.

“We were doing great in Vista,” Garcia said. “Had a beautiful home. My wife and I owned A and P, for Al and Patricia, Iron Works, a wrought iron fencing company. One year we grossed around a quarter million dollars.”

Then one day, “Joaquin was playing with his friends,” Garcia said. “Joaquin was in the middle of the road, which was unmarked, waiting for a car to pass before he went over to his friends. The guy looked to his left, at Joaquin’s friends. He didn’t see Joaquin, and he hit him. If he had looked straight ahead, he would have seen him.”

The Garcias had been to Santa Maria to visit family, and it seemed like an ideal place to raise a family, he said.

“When we got here in 1990, people were so welcoming. They’d call Patricia and me over for tri-tip sandwiches and beer on their front lawns.”

The Garcias came to the area with no firm prospects. “After leaving a quarter-million dollar business, we came up here on a prayer,” Garcia said. “We had enough to pay the first month’s rent.”

“The woman who ran it is a wonderful woman who has been in Santa Maria a long time,” Al Garcia said. “Patricia worked for the cleaning service for about a year and a half then got a real good job at the Hilton in Santa Maria.”

The couple, though facing a difficult time, eventually settled in. Al Garcia had family in the area including Gonzalo, a veteran club soccer coach himself, and another brother, Rod, a veteran coach and teacher. Rod was the kicker for the Stanford team that won the 1972 Rose Bowl.

Al and Patricia joined a support group, Compassionate Friends. “It’s for parents who have lost children,” said Al Garcia. “We were part of the group for five or six years. We went to all the meetings. It really helped. Less than five percent of couples who lose a young child stay together.”

Al Garcia has a lot of fond coaching memories though. “We won that final four game, really. We were ahead of Santa Rosa 1-0, then the ref added SIX extra minutes, and I think he lost track of time,” he said.

Santa Rosa scored the tying goal, the ball was placed at midfield, the Bulldogs kicked it once and the official blew his whistle, signifying the end of full regular time. Santa Rosa scored in overtime and eventually won 2-1.

Isiah Garcia hit over .500 twice in his prep career | Player of the Decade

“Hometown officiating,” Garcia said. “The (Santa Rosa) coach is looking at me, going ‘Congratulations,’ and I’m standing there thinking ‘The game is OVER.’”

But is wasn’t, not officially anyway, and Santa Rosa prevailed then beat Santa Ana in the championship game.

“I think we would have beaten Santa Ana,” said Garcia. “We had Isaac Torres, an All-American, Nathan Nuñez, another All-American and an outstanding goalie, Jason Hancock. That really was a special team.”

Garcia said with pride that all three kickers he worked with at St. Joseph, Dominic DeRisio, Nathan Halsell and Brock Marcois, signed with universities, though Humboldt State dropped its football program shortly after DeRisio arrived there.

“My only real regret about coaching was that I didn’t fulfill my goal of coaching (NCAA) Division 1. But that’s my fault. I didn’t jump ship when I had the chance.

“A guy who played for me at Hancock, Travis Clark, was an assistant at Cal State San Bernardino. He said the head coach there had left, and there was an opening for an assistant.

“I had all the proper certifications and credentials, but I didn’t want to put the family through another move, so I stayed put," Garcia said.

He persevered but, “When you lose a child, there’s a wound in your heart that doesn’t heal,” Garcia said. “Over time, it gets worse.”

What the Garcias have gone through, though, “shows that families can survive,” Garcia said.

The Force finished third in the Cal State Games/Junior Olympics age group tournament that took place July 23 and 24. That was the highest finish for an "Lompoc Girls Softball Association team at the state games,” said Bree Jansen.