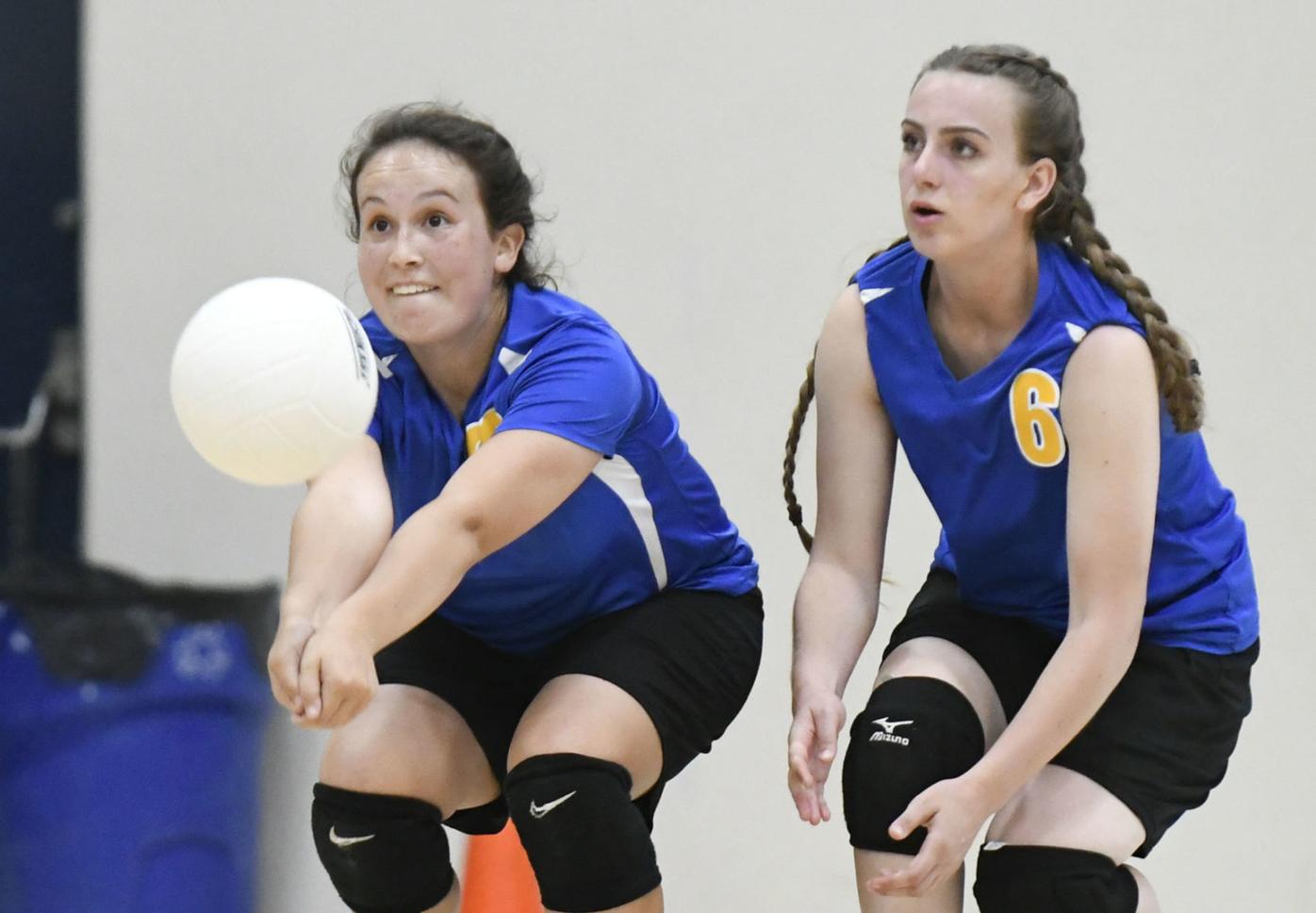 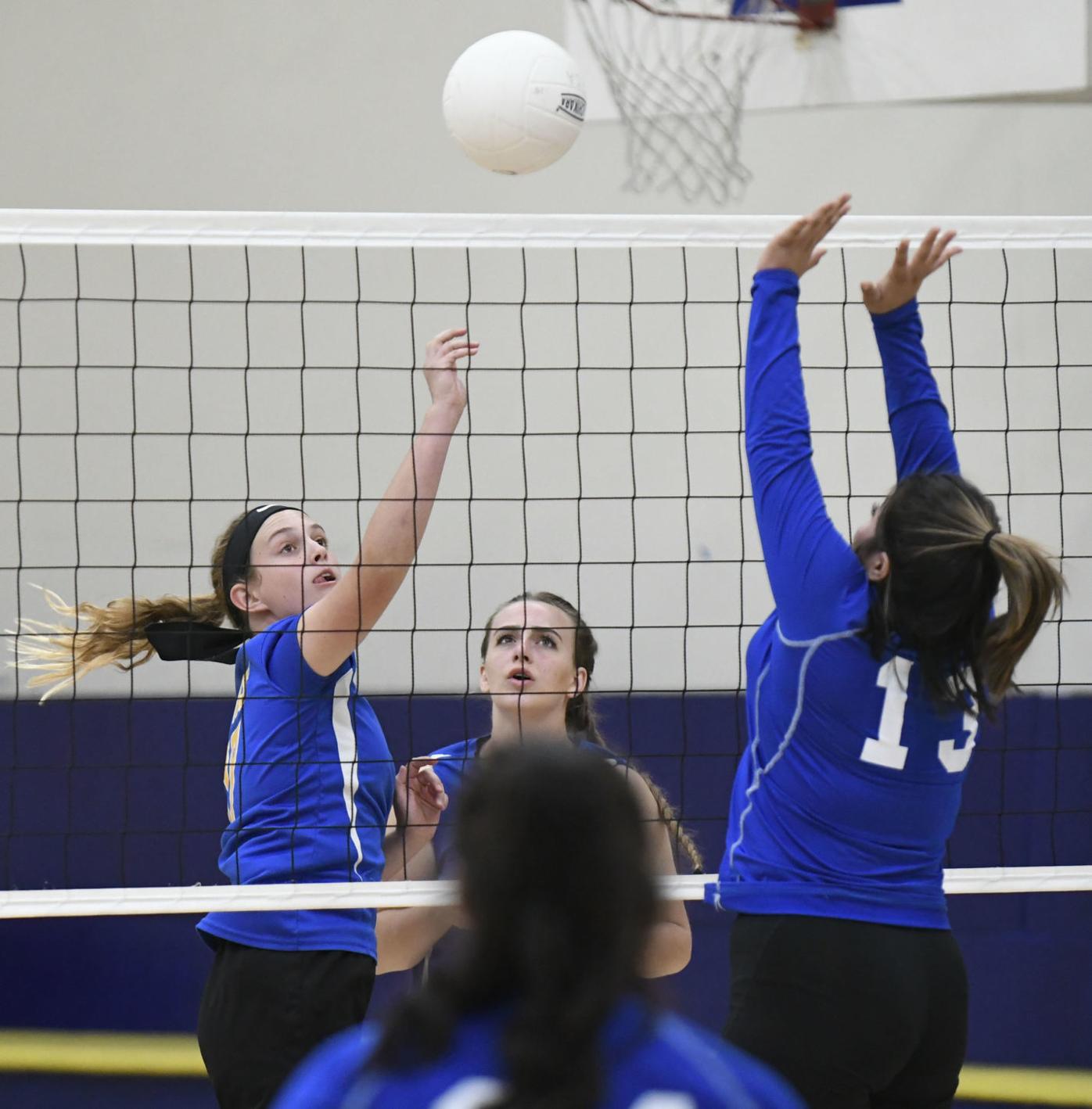 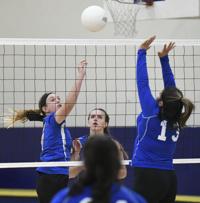 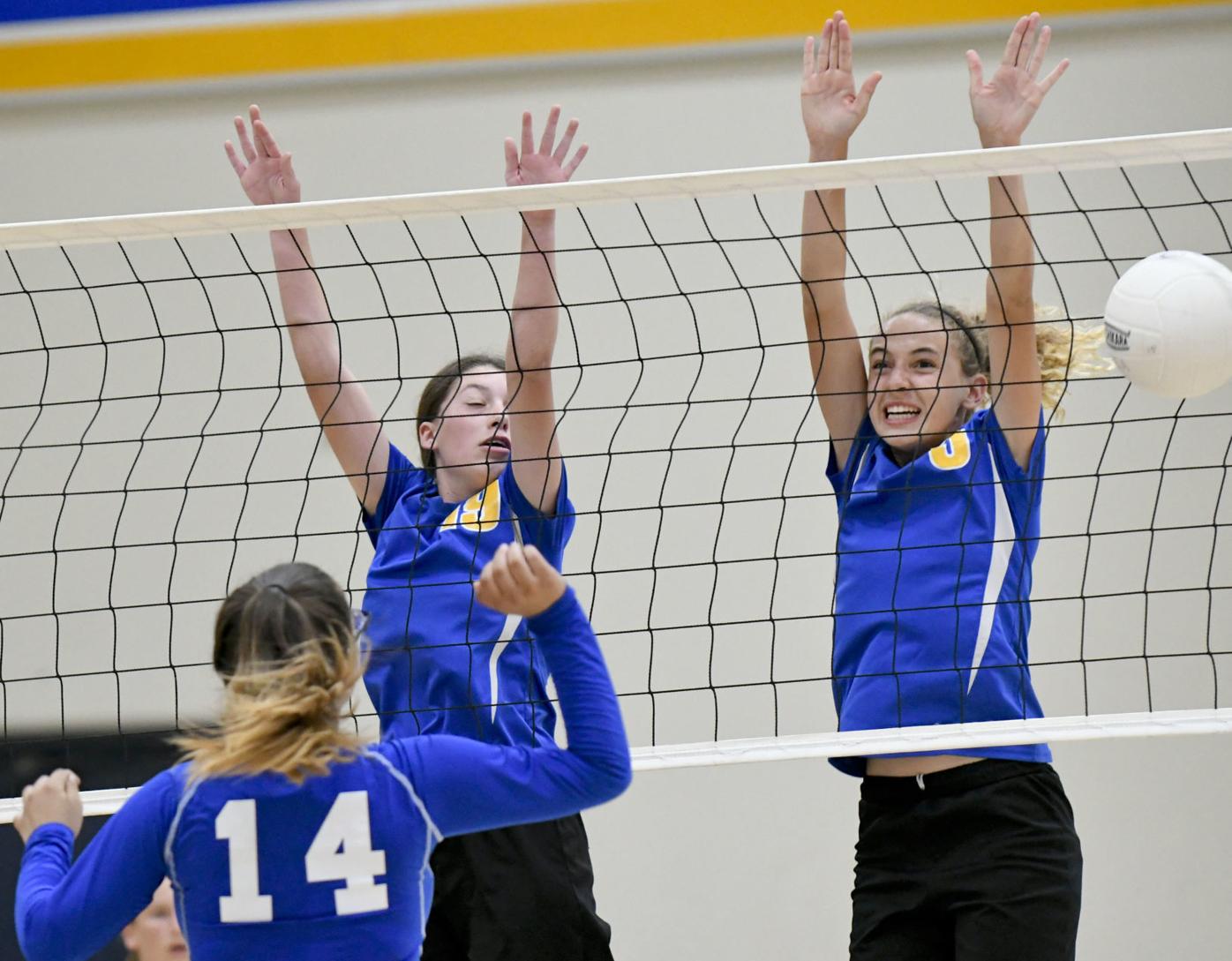 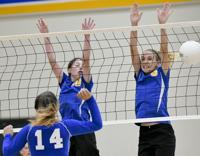 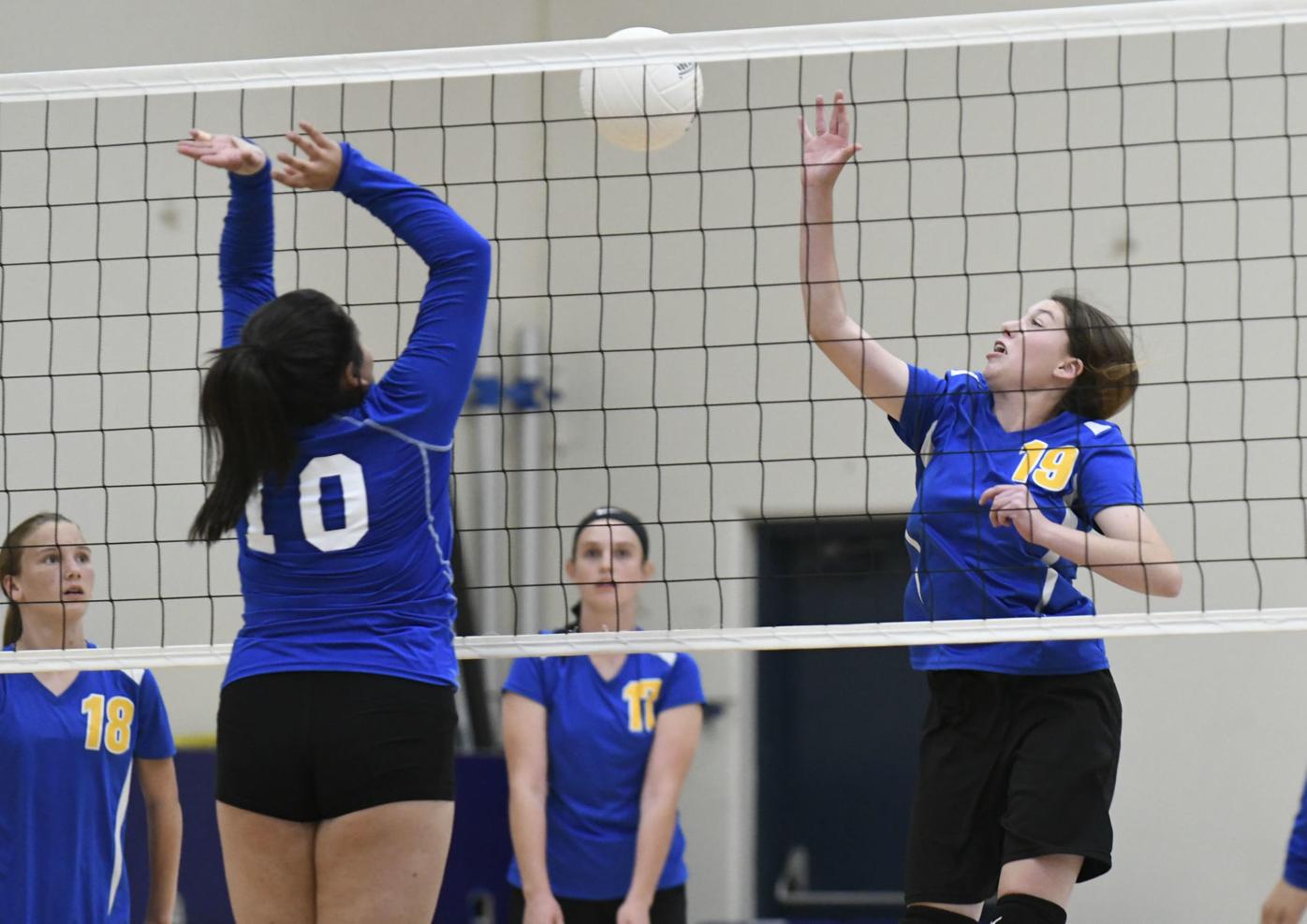 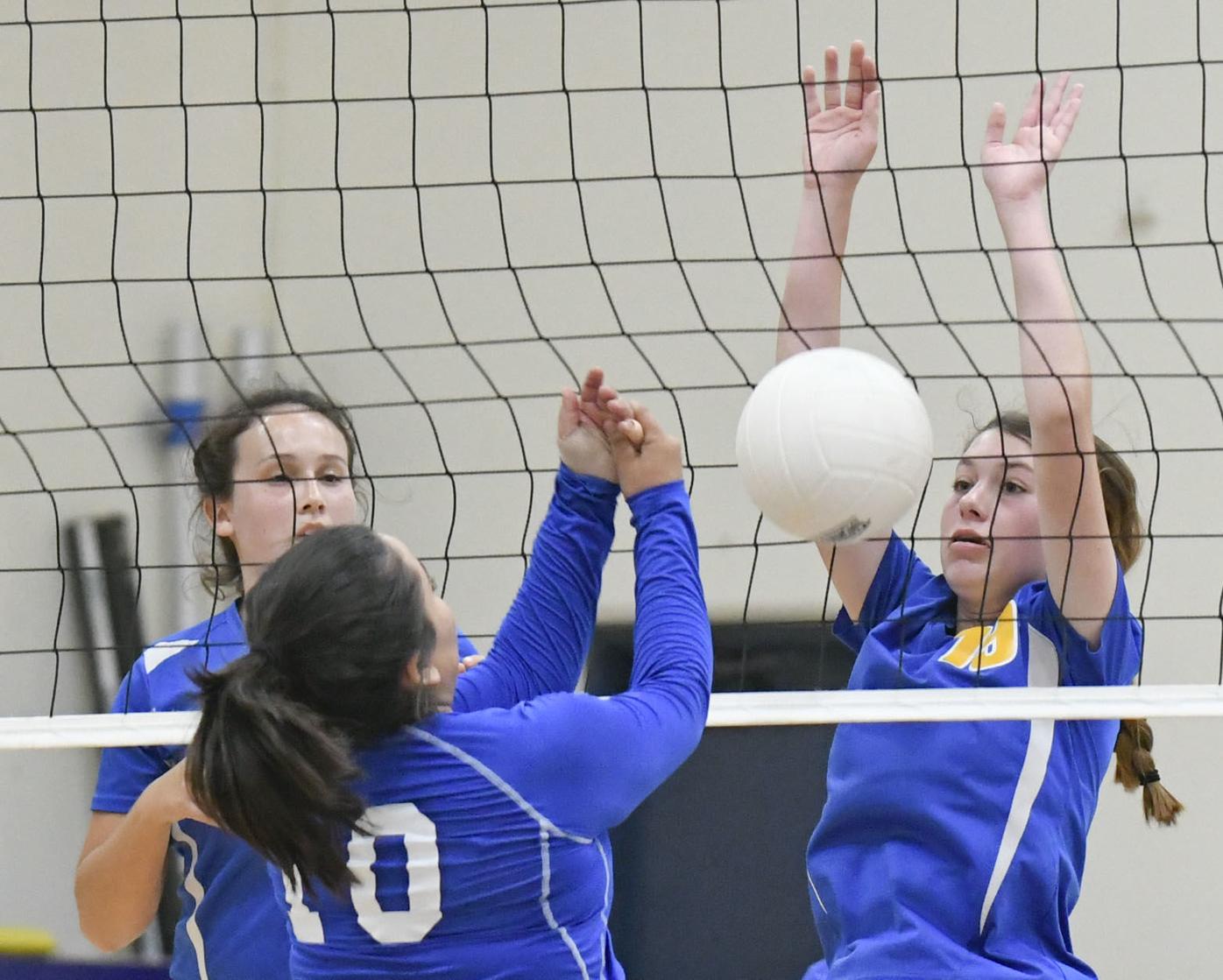 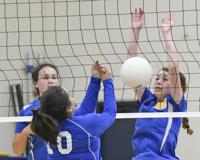 Valley Christian Academy's Hannah McCoy watches as Shandon's Angela Ramirez tries to save an Outlaw pass into the net.

Valley Christian Academy's Hannah McCoy watches as Shandon's Angela Ramirez tries to save an Outlaw pass into the net.

Her team, second-year Valley Christian Academy girls volleyball coach Rebecca Maples said, does not have much in the way of experience.

"We carry seven players," said Maples. "We have only two varsity returners, Lindsay Mikkelson and Kassidy Heller. One of our players, our freshman setter Gabby Sassenberg, did play club volleyball with Ocean's Elite."

Sassenberg is the setter. Mikkelson, a sophomore, plays on the right side.

Mikkelson was VCA's hitting leader Thursday night, and Rebecca Maples said that is the way it has been throughout the young campaign.

"Lindsay leads us in hitting and in digs," said the Lions' coach. "She is determined to get to every ball."

The Lions got an early lead in each set, but never could hold their advantage. Down 6-4 in the third set when Angela Ramirez started her service series, the Outlaws took command when Ramirez served nine unanswered points.

The junior started her run with three consecutive aces. Her last one put the Outlaws ahead for good, 7-6.

Ramirez and Shayley Cuellar gave Shandon some steady hitting and, over time in each set, the Outlaws simply hit with more authority and made fewer errors than the Lions did.

During each set, the Lions would have a good run then have coverage problems, particularly in the middle on their side of the floor.

Maples said the match typified how the young season has gone for her young squad so far — stretches of good play then inconsistency.

"Consistency has definitely been a problem for us," said Maples.

"We're on a learning curve. It's a process. Most of the girls are actually basketball players."

"Basketball is the love out here. There is not a love of volleyball here yet. I think these girls will be the ones who will get the love, the interest, for volleyball going out here."

Friday Football Preview: After facing same opponents, Bakersfield Christian, St. Joseph to face each other; Lompoc and A.G. square off at PVHS

"Our girls play in basketball leagues during the summer," said Rebecca Maples. "Last summer we had one night of volleyball a week, in a park.

"We brought in a coach, Caleb Sibert who is an assistant coach at the University of South Florida, and he gave the girls an intense week of fundamental skills and volleyball strategy."

Rebecca Maples said, "It helped huge. We are trying to take steps up, and he was a step up for us."

Her team has won just one match so far, but Rebecca Maples said her players have made a lot of progress since the season began.

The Lions will play at the Shandon Tournament Saturday.

Righetti football coach Tony Payne likes to refer to his team's running game as "the three-headed monster." This year the Warriors have a three-sided passing game as well, and they've been throwing the ball a lot more.

Jasmine Vongvone racked up 13 kills and eight digs for the Titans. Her sister, Kaitlyn Vongvone, had 26 assists. Kat Anderson had 13 digs and four blocks for Nipomo.

Five Orcutt singles players won in straight sets, and Riley Speer took a 7-6 (4), 4-6 (10) win in a third set tiebreak as the Spartans moved to 3-7, 3-2 with an Ocean League win over the Saints at the Minami Center.

Kayla Pablo, Melani Amarasekora, Korrina Bender, Isabelle Lopez and Shivani Panchel all won in straight sets for the Spartans. Pablo won 6-0, 6-0 at No. 1 singlse, and Amarasekora dropped one game at No. 2.

The Knights (6-0, 2-0) squeezed out a Mountain League win against the Greyhounds in a match that took more than five hours at Atascadero.

The St. Joseph's doubles teams of Michahjuliana Lundberg and Shianne Gooley, at No. 2, and Gina Rigali and Marlee Hernandez, at No. 3, gave the Knights the win. Lundberg and Gooley won 6-0, 6-2. Rigali and Hernandez won 6-2, 6-2.

St. Joseph singles players Emily Wilson, at No. 1, and Janelle Brickey, at No. 6, each took their first loss of the year, but Lundberg, at No. 2, Katelynn Haskell, at No., 3, and Gooley, at No. 4, all won in straight sets, dropping five games between them in the process, to give St. Joseph a split in singles.

Atascadero's Anneline Breytenbach, one of the top players in the area, downed Wilson 7-6 (3), 6-1. Kyla Stokes won at No. 5 singles and Camille Reberg, at No. 6, both won in three sets for the Greyhounds.

With just eight players, and missing three starters because of illness, the Panthers had to forfeit all three doubles sets at No. 2. Thus, the Braves went 9-0 in doubles. The Panthers were 6-3 in singles.

Webb shot a 39, and the Eagles shot a team score of 224 over nine holes to win easily. San Luis Obispo was second at 258, Righetti was third at 260 and Atascadero was fourth at 268.

Claire Alford led Righetti with a 40. Katie Bruson led Atascadero with a 42, and Ellery Yasumoto carded a 44 to lead San Luis Obispo.

The Pirates won a three-team cross-section match over the par 36 nine holes at Monarch Dunes in Nipomo.

Medalist Marina Vengel led the Pirates to the win. Vengel shot a 45.

Lilly Brummitt, at 58, A.J. Jovia, at 60, and Celeste Rojas and Pati Sterling, both at 67, came in behind Nunez for the Titans.

The Royals edged the Panthers (2-3, 2-2) in an Ocean League match at Dairy Creek in San Luis Obispo.

Golfers played nine holes. Margret Heffernan of Mission Prep was the medalist. She shot a 47.