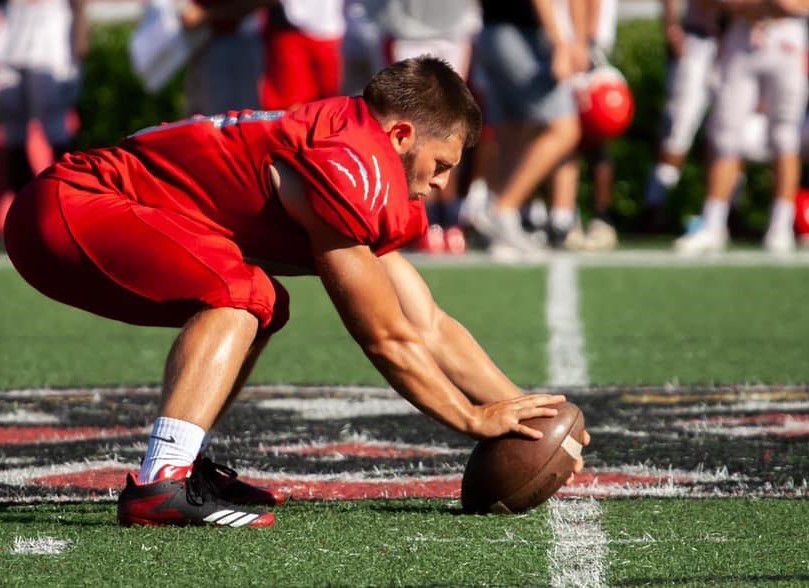 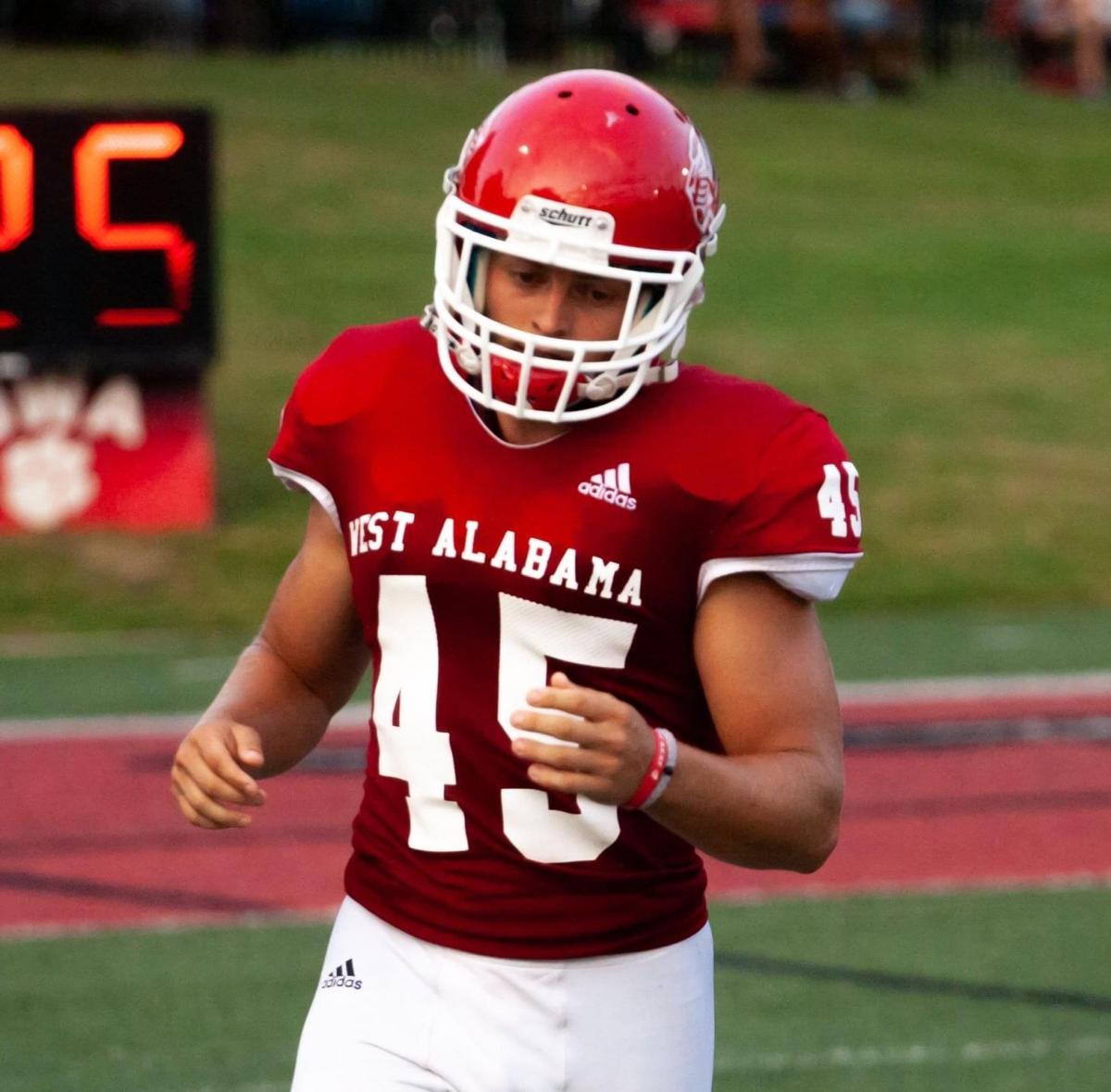 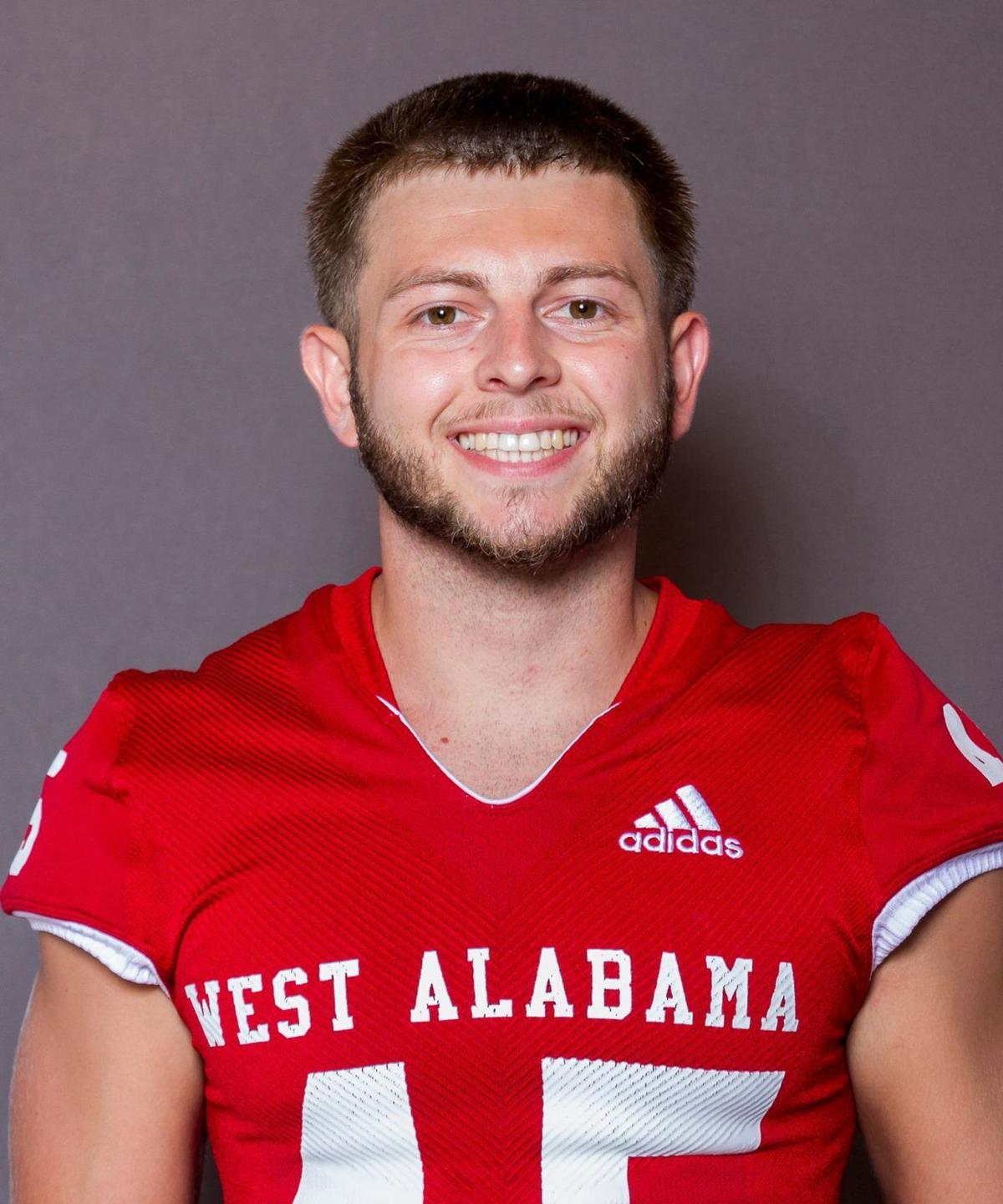 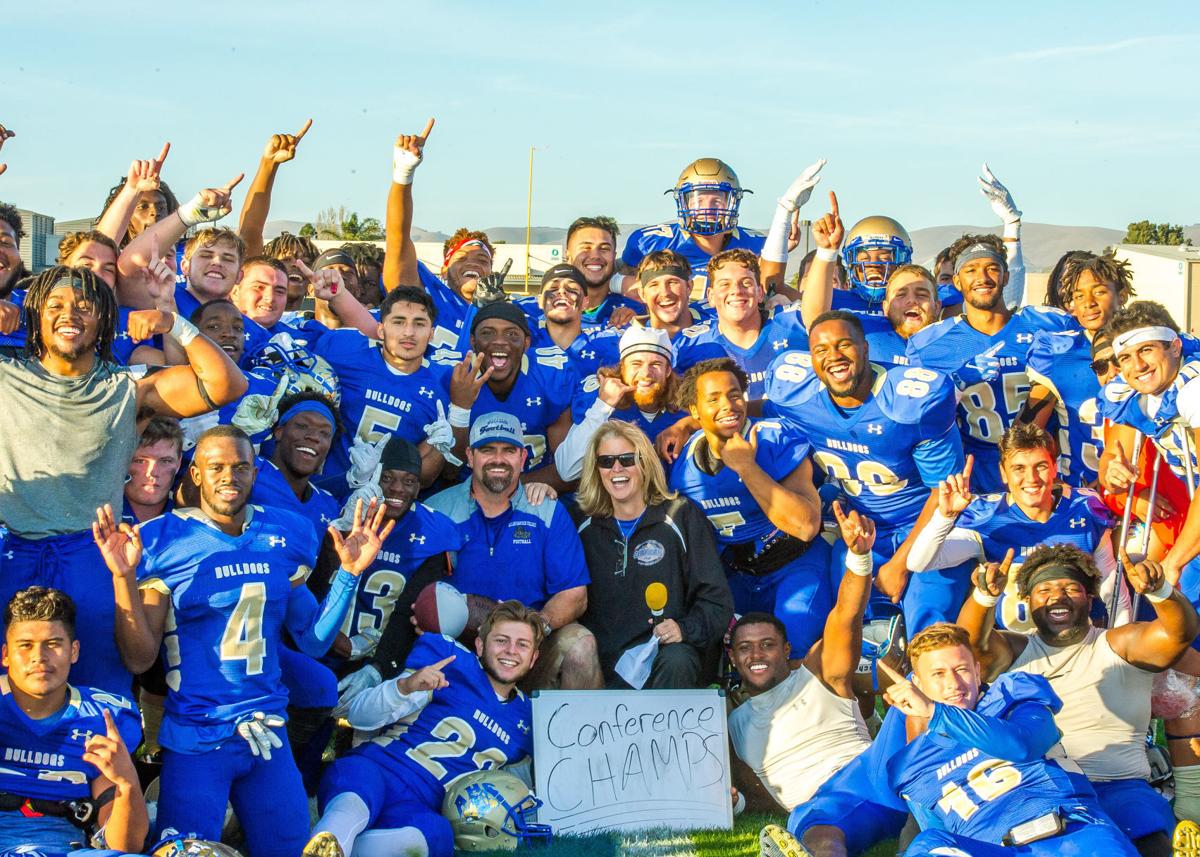 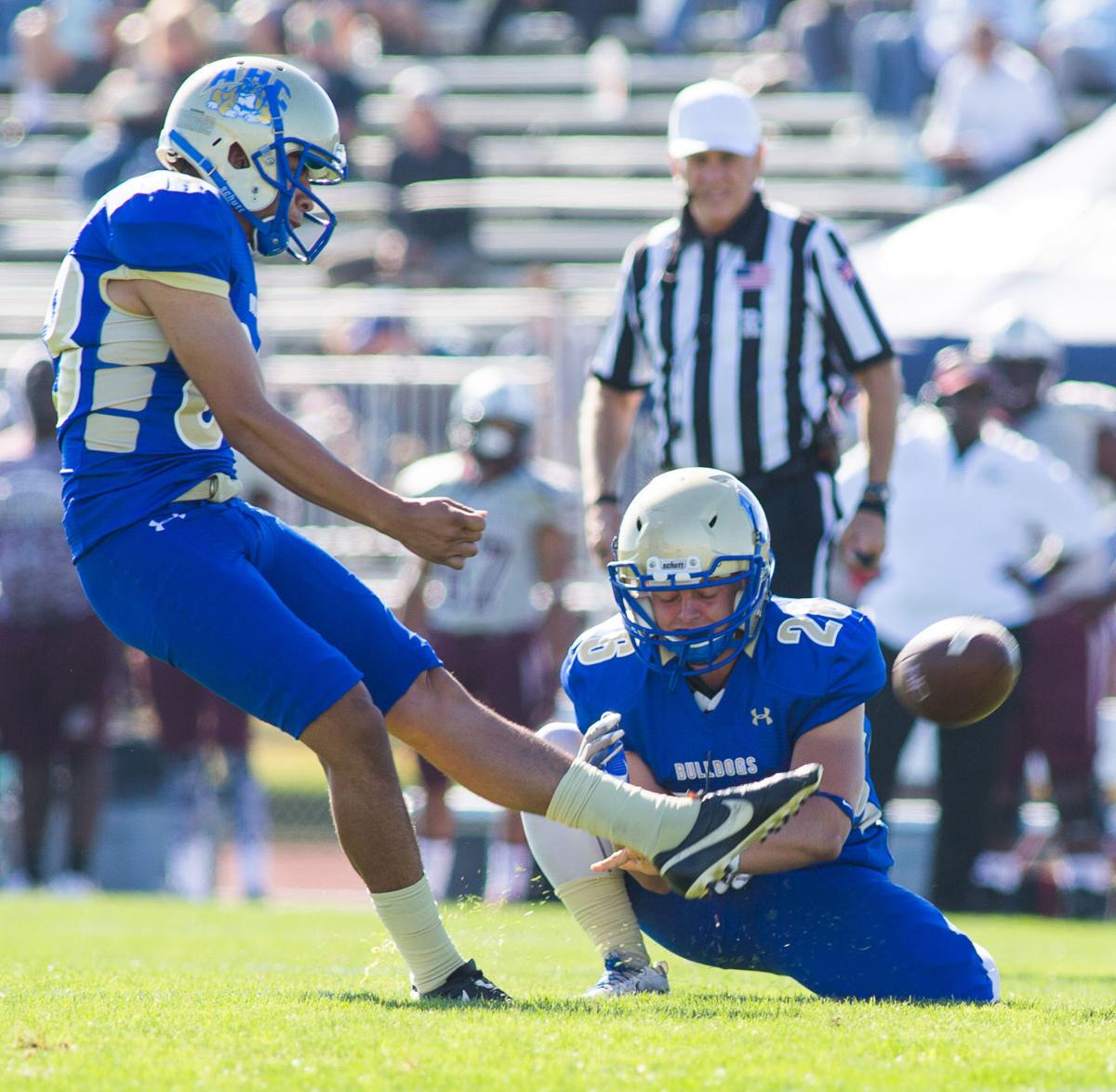 Hancock College's Colten Adam holds the ball for kicker Maisen Baro on a first-half field goal to give Hancock an early lead over Antelope Valley College in November of 2016. 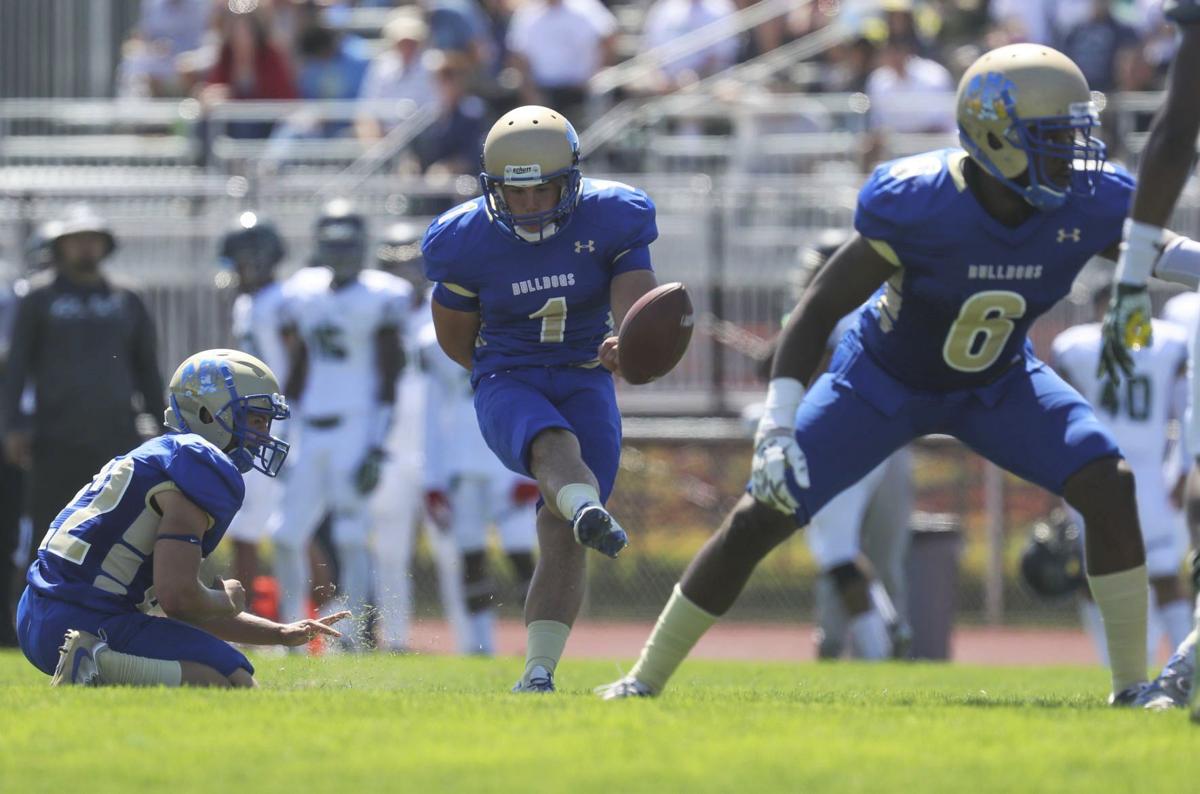 Hancock's Jordan Pollard kicks as teammate Colten Adam holds during a Sept. 7, 2017 game. Adam has moved on to play at West Alabama, a Division II program where Adam is a long snapper.

While many of us have been staying close to home, Colten Adam has spent this pandemic 2,000 miles away from his hometown.

Adam currently finds himself in Livingston, Alabama, some 2,120 miles from his alma mater, Righetti High School.

What Adam is doing there is also a bit outside-the-box.

That's right. Adam finds himself in a small Alabama town in the middle of a pandemic, waiting to play football.

And Adam wouldn't change a thing. He's used to forging his own path to chase his football dreams.

Player of the Decade: Syenna Ramirez went from role player to star at St. Joseph

Syenna Ramirez mastered the art of getting better. Ramirez was a solid offensive contributor during her first two seasons at St. Joseph High. She scored about 8.5 points a game and added some rebounding and play-making with good, reliable defense. Then came Ramirez's junior year.

The 5-foot-7, 180-pounder graduated from Righetti in 2016. He realizes he wasn't a star player back then, playing some running back and defensive back.

"I never was a big name talked about in high school sports. I was just an average, or slightly above average, player," Adam said. "However, I always knew that with hard work and the right mindset, my skills would improve."

Adam spent two seasons at Hancock College, working as a snapper and holder on punts and kicks after a coach introduced him to long snapping at Righetti.

During that 2017 season, one in which Gregg led the Pirates to an 8-2 record, he completed nearly 66% of his passes (149 for 227) for 2,566 yards and those 35 touchdowns against just eight interceptions. The Pirates won their first seven games that year in dominant fashion and lost two of their last three by just 16 combined points.

"It was my junior year of high school and coach Gabe Espinoza was the special teams coach at the time," Adam said. "Coach was looking for a guy for the job and long snapping didn’t seem hard to me, so I snapped a few times and secured the job."

After spending the 2016 and 2017 seasons with the successful program at Hancock, Adam decided to try his luck in Illinois and joined the Trinity International University football team, an NAIA program in Deerfield.

Adam spent his red-shirt season there. He then transferred to West Alabama. He played with the Tigers in 2019 and is with the team now, though the school has postponed its football season due to the COVID-19 pandemic.

Let's not forget how great Derrick Portis was at Lompoc High

"The game of football has been loyal to me," Adam said. "With all the extra work I put in during high school, JUCO and every offseason, positive outcomes have come my way on and off the field."

Adam said the team hopes to play in the spring. The players are lifting weights three days a week, conditioning and doing field work on the other days, he says. Adam earned the starting long snapper job at West Alabama last year and played the first five games before suffering a season-ending ACL injury. He says he's recovered and ready to play.

There was definitely a bit of culture shock when settling into Livingston, a town of about 3,500 people, he said.

"I’ve noticed a few similarities and many differences with Southern tradition compared to West Coast living," Adam said. "I sure do miss the weather and food in California. There's nothing like some La Picosita, Firestone, Rancho Nipomo, the Swiss, and other restaurants that you can’t find down here."

Adam said the town is surrounded by forestland. The closest city is about 45 minutes away and he's about 20 minutes away from the Mississippi border. He's spent some days on local rivers and has checked out the hunting grounds in the area.

"There isn’t much to do around here, not too many distractions," Adam said. "It’s a good way to stay focused on classes and football... A lot of soul food and fried food down here. I tend to eat healthy so I buy my own food and cook it. There's good Southern folks down here. They are definitely different than the Central Coast, but very nice and welcoming."

Player of the Decade: Kaitlyn Flowers was one of area's most dominant two-way guards

Adam doesn't know where his long snapping will take him next. He's just enjoying the ride while he can. There are 32 NFL teams that each need a long snapper, after all.

"The NFL has always been a dream, however, I have to be real with myself," Adam said. "I know my height will affect my chance to make it to the league. All I can do is control my work ethic, my attitude, and my persistency. If my name isn’t called I will be fine with it, but if my name is called I will be ready."

Compton was born to pitch. She starred for the Orcutt Express travel team in her youth, winning a national title in 1981. She also pitched Righetti High to three CIF titles (1979, 1980-81).

Player of the Decade: Rylee Sager had durability and productivity during her days at Lompoc High

Basketball was not the only sport for Rylee Sager. Was it her best sport? Perhaps, though she was also a softball, golf and cross country standout at Lompoc High. In fact, Sager earned Los Padres League MVP honors in both basketball and softball and would go on to play softball at Sacramento State.

Emily Wilson hit a second service winner in this 2019 CIF Central Section Division 2 semifinal, and the Knights were into the sectional championship match.

Vreeland recorded 109 total tackles as a sophomore in 2015, then added 115 total tackles the following year before closing out his varsity career with a 106 tackle effort as a senior in 2017.

The Other Guys: Scotty Cusack was lightning in a bottle

Cusack never topped 1,000 yards rushing in a single season during his three-year varsity career at St. Joseph. Nevertheless, just by watching him play, you'd see he was one of the best the Central Coast had seen over the last decade.

"His presence will definitely be missed, on the sidelines and in the lives of those who knew and loved him:” Ben Castro, youth basketball coach, dies at age 44

“(Coach Ben) made sure being on the team felt like you were part of a family," Alijah Paquet said. "I want to thank him for allowing me to become best friends with people I probably would not have otherwise met.”

Hancock College's Colten Adam holds the ball for kicker Maisen Baro on a first-half field goal to give Hancock an early lead over Antelope Valley College in November of 2016.

Hancock's Jordan Pollard kicks as teammate Colten Adam holds during a Sept. 7, 2017 game. Adam has moved on to play at West Alabama, a Division II program where Adam is a long snapper.